ESPN's "Monday Night Countdown" pregame show debuted its new "tailgate hour" in Kansas City on Oct. 2. Green Bay is one of two other NFL cities that will get the fan-focused segment beginning at 5 p.m. Monday when "Countdown" airs live from behind the Tundra Trio on Stadium Drive for the Lions-Packers game.(Photo: Courtesy of ESPN)

The former “Monday Night Football” sideline reporter and now host of the “Monday Night Countdown” pregame show does some loose calculating aloud during a phone interview and comes up with a not necessarily definitive tally — “Twelve, let’s say” — but some unforgettable moments.

She remembers when the entire “MNF” crew walked into the stadium for the first time. “We all did goofy Lambeau leaps.”

There was the preseason game when it poured rain and nobody in the stands left. “It was remarkable.”

In a league in which each stadium is revered by the fans who call it home, Lambeau Field is special, Kolber said.

“And maybe the most special, just because of all the history,” she said. “If you are an NFL fan, doesn’t really matter how long, you know the lore. You just know it and you feel it and sense it. Even all of the improvements were done with such taste and respect that it has never really lost that. When you show up there, you just kind of feel all the history. You feel a part of it, and it really is something special.”

RELATED:  Owning a Packers party house is not all a party; it's a job, too

On Monday, Kolber returns as “Monday Night Countdown” comes to town to for the Lions-Packers game. It already has the makings of another memorable visit, and not just because it will be her first on a bicycle (more on that later).

The first 75 minutes of the 5 p.m. show will be broadcast live from the backyard of Tundra Trio, three homes on Stadium Drive in Ashwaubenon that have been converted into luxury tailgate rentals. Adjacent to the stadium’s main parking lot, the location will allow Kolber and analysts Matt Hasselbeck, Randy Moss, Charles Woodson and Steve Young to interact with fans and capture some of the excitement and uniqueness of the Lambeau tailgating scene for viewers at home.

Green Bay is one of only three cities getting “Monday Night Countdown’s” new “tailgate hour” this season. ESPN rolled it out in Kansas City on Oct. 2 and will do it in Seattle on Nov. 20.

“To be honest with you, it’s just a natural fit. As you realize how special Green Bay is as an NFL town and an NFL stadium experience, when we decided to do this, Green Bay was exactly the town we were thinking of,” said Seth Markman, senior coordinating producer with ESPN. “Not everybody gets to go see a game at Lambeau Field. You’re lucky. Our goal and our mission was to try to be able to show the rest of the country what a game-day experience really is like in Green Bay.” 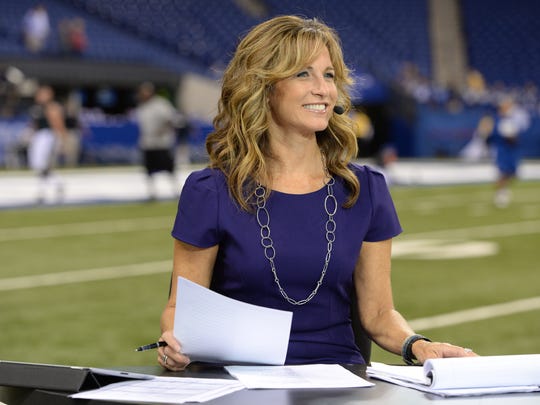 "Monday Night Countdown" host Suzy Kolber says of the show's analysts — Charles Woodson, Matt Hasselbeck, Randy Moss and Steve Young — Moss is the one most likely to crack her up off camera. "His personality is very off the wall. You never quite know what to expect." (Photo: Courtesy Allen Kee/ESPN Images)

Where the action is

Broadcasting from inside the stadium, particularly at 5 p.m., generally means a fairly empty venue.

“The real action is happening outside,” Markman said. “So what was kind of in our minds is, how do we show kind of the best of both worlds here and give our viewers an experience where they can see what’s going on outside and then come back inside as we get closer to kickoff?”

The show will move inside the stadium at 6:15 p.m. for its second hour.

A 24-foot-by-24-foot demonstration field will be set up behind the Tundra Trio and will serve as the set for Kolber and crew. Markman is encouraging Packers fans to show up in the Lambeau lot behind the houses at 896 and 890 Stadium Drive to watch the show and maybe even become a part of it.

The on-air personalities will be out and about among fans, he said. Moss and Woodson will wade into the crowd for their weekly "The Randy & Charles Show.”

In Kansas City, the “Countdown” set up in a parking lot outside Arrowhead Stadium to see firsthand Chiefs fans’ tailgating traditions and get sticky fingers from all that famed barbecue. A local barbecue joint was on site.

Even with the earpieces that connect the hosts to the production crew, it was so loud they couldn’t hear one another, Kolber said. They’re eager to see what they’ll find when they mix it up with Packers fans.

“A guy like Charles Woodson, who played in Green Bay and loves Green Bay, he kept telling us how great it’s going to be and that the fans will be ready for the challenge on Monday night,” Markman said.

While there’s nothing like surrounding yourself with fans to tap into what makes a good tailgate tick, it's also hard not to wonder if all that spontaneity from the crowd is enough to make a producer a little nervous.

“I’ll say this: I didn’t feel like we could do this in every city, you know what I mean?” Markman said, laughing. “But my experiences with the fans in Green Bay have been great. They’re just passionate fans ... and enthusiastic about their team, the Packers, the town, but respectful of us when we’ve been there.”

(For the record, there is security.)

The Tundra Trio is the same location ESPN’s “Mike & Mike in the Morning” radio talk show used for a live broadcast in 2015. Good Karma Brands, which purchased the houses in 2011 and renovated them (including a garage converted into a wine bar) for special events use beginning in 2013, is excited for another opportunity in the spotlight.

“‘Monday Night Football’ is the signature program throughout all of ESPN, so to know that they want to have it at our venue is incredible,” said Craig Karmazin, founder and CEO of Good Karma Brands. “With the Tundra Trio being residential properties where you don’t even need to cross the street to get into the Lambeau Field parking lot, that’s something that just doesn’t exist anywhere else in the NFL.So to visually be able to show that to the worldwide audience that’s going to be watching is what they were looking for.”

It’s all about embracing the sense of place, Kolber said.

“The people at home are just going to enjoy what it's like to go to a game at Lambeau Field, to tailgate, to have the stadium right there. What’s it like to be there?” she said. “I think we really get to take people with us on this adventure.”

When it comes time for the “Monday Night Countdown” crew to move from the Tundra Trio to inside Lambeau Field, it takes some tricky play calling to make it happen.

Kolber describes the show as “a big puzzle.” It requires strategically building in a feature segment that will take the show to a commercial break to allow enough time for the mad dash across the parking lot.

By the magic of television, the next time the audience sees them, they’re inside the stadium.

But because this is Lambeau Field, with its training camp tradition of Packers players riding the bicycles of young fans from the stadium to the practice field, Kolber, Hasselbeck, Moss, Woodson and Young plan to hop on bikes when they head to their stadium set around 6:15 p.m.

Between cast and crew traveling to Green Bay and those back in the ESPN studios in Bristol, Connecticut, it takes about 275 people to pull off the “Monday Night Countdown” and “Monday Night Football” broadcasts.

Kolber will arrive Saturday night. She’ll go to Packers practice on Sunday, meet with coach Mike McCarthy, some of his coordinators and a handful of players early in the afternoon and then head to Appleton on the “MNF” bus to meet with the Lions for a couple of hours. By late Sunday night, she hopes to have half of the show written.

“And then I get up excruciatingly early on Monday morning,” she says, to continue writing, maybe find time for “a tiny workout,’’ do hair and makeup, squeeze in a little more writing and then head to Lambeau for a pre-show meeting at 2 p.m. to tie up any loose ends. A half-hour before air time, she’s on her way to the set.

In addition to the preshow, there’s also halftime and postgame. Her 18-hour day usually wraps around midnight. Her first chance to close her eyes comes on the 5 a.m. flight back home.

“And then we all call it Comatose Tuesday, because you feel like you kind of got hit by a train the next day,” she said. “Tuesdays are a little rough.”

» Be a part of the tailgate hour: Fans are invited to show up in the Lambeau Field parking lot behind the Tundra Trio houses on Stadium Drive to watch the special 75-minute tailgate hour with Suzy Kolber and the preshow analysts beginning at 5 p.m.

» Featured segments: Jon Gruden’s “Chalk Talk” with Brett Hundley; the story of Brian Gushue, a football fan with cerebral palsy who set a goal in 1977 to attend 500 NFL games and will be at the Lions-Packers game at Lambeau for No. 500; a feature on former Packers running back Samkon Gado, who is now a resident ear, nose and throat doctor at St. Louis University Hospital in Missouri; a look back at the “MNF” game on Nov. 6, 2000, in which Packers wide receiver Antonio Freeman made an unbelievable catch in OT to beat the Minnesota Vikings at Lambeau.