Lodge Kohler is the first anchor to begin construction in the Green Bay Packers' Titletown District.

The Titletown construction site viewed from the sixth floor windows of Lambeau Field on April 13, 2016. Lodge Kohler will be at the left.(Photo: Jim Matthews/USA TODAY NETWORK-Wisconsin)

The four-diamond, 144-room, five-story hotel is expected to open before the beginning of the 2017 NFL regular season. With an 18-month construction timeline, it is the first of the district's three anchors to break ground.

The other anchors are Hinterland Brewery and a Bellin Health sports medicine clinic. Their ground-breakings have not been announced.

Titletown District is a 34-plus acre development, all in Ashwaubenon, bordered by Lombardi Avenue, South Ridge Road, Marlee Lane and Brookwood Drive. Phase 1 consists of 21 acres, including 6 acres of a planned 10-acre public park and plaza.

The district also will have 180,000 square feet of commercial space along Lombardi Avenue and Marlee Lane, and as many as 70 townhouses along Brookwood Drive.

The Packers have said they will work on the rest of the project once they get the anchors and plaza underway. 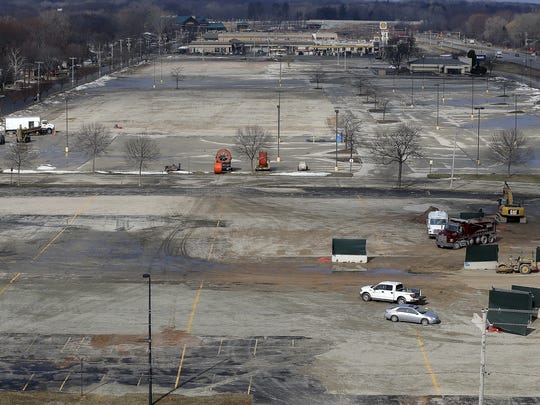