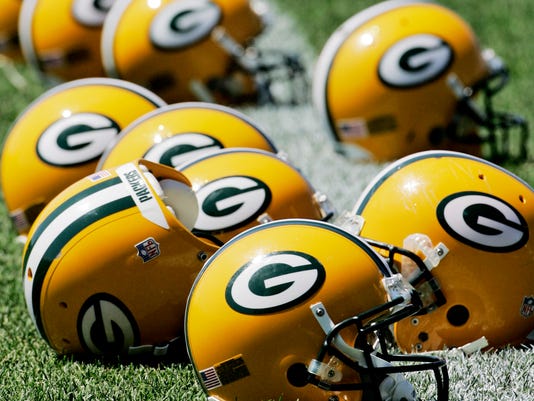 Green Bay Packers helmets are lined up on the field before a training camp practice.(Photo: Morry Gash/AP)

Also, WLUK will carry the 2016 Pro Football Hall of Fame exhibition game that features the Packers against the Indianapolis Colts. Former Packers quarterback Brett Favre will be inducted into the Hall of Fame that weekend.

The Green Bay television station will carry 11 preseason and regular-season Packers games this season, not including playoffs. The Hall of Fame game will be at 7 p.m. Aug. 7 in Canton, Ohio. The Packers play in one "Monday Night Football" game, at 7:30 p.m. Nov. 28 in Philadelphia. ESPN will carry the Hall of Fame and Monday night games as well.

Fox also will carry the NFC playoff games and the Super Bowl.

WFRV-TV, the CBS affiliate, will carry two Packers Sunday games against AFC opponents and the Thursday night Packers-Chicago Bears game at Lambeau Field that is also on NFL Network. The station will carry five early season Thursday night games in conjunction with the NFL Network, concluding with the Packers-Bears game on Oct. 20.