Most frequent residential parking prices are in $20-$25 range

Recognizing an increase in demand after the Packers eliminated hundreds of spaces with the beginning of Titletown District construction, some homeowners around the stadium bumped prices up, generally about $5, with higher spikes closer to the field.

Lambeau Field has a capacity of 81,435, which means more than 20,000 vehicles need parking on game day. Lambeau has capacity for about 3,000 cars, in addition to staff, media, ADA and premium parking.

The Packers charge $40 for parking at the stadium. Several private lots nearest the stadium also charge $40. There are a few in the $30-$35 range, but the most common prices for residential parking are $20-$25.

Parking is generally cheaper in Green Bay, north of the stadium. It is more expensive along major streets, such as South Ridge Road and South Oneida Street, and a little higher west of South Ridge Road in Ashwaubenon.

Prices were much higher for the University of Wisconsin-Louisiana State University game over Labor Day weekend, some going as high as $80-$100 per vehicle. They settled back to more normal ranges when regular season Packers games resumed on Sept. 25.

Tina Heezen on Valley View Road and James Boucher on Kassner Drive said prices were raised to $20 this year from $10 and $15 at the beginning of last year.

"I’m not going to raise it any more. I don’t want to take advantage with those people. I just want to be competitive with the market nearby," Boucher said.

With 11 football games at Lambeau Field this year, not including possible playoff games, a homeowner who can park 10 cars and charge $20 stands to make an extra $2,200. Homeowners have become very good at making the most efficient use of available space. They also tout easy exits, tailgating and some even make bathrooms available.

Neighbors do talk to one another about how much to charge, although rates are not universal. Prices along Valley View Drive, for example, are almost all $20, except for a couple houses which charge $15, one of them only a block from Lambeau Field.

As one homeowner explained it, some don't raise prices because they have a lot of regulars and don't want to charge them more. Others say they don't need the extra money and meeting people is an attraction as well.

James VanStraten of South Ridge Road said his spaces always fill up and three-quarters of his clients are regulars.

For the early birds, free parking is available on streets in Ashwaubenon and Green Bay. Fans are advised, however, to obey parking signs. Parking is not allowed on certain streets that are major routes to entering and existing the area and police are vigilant. 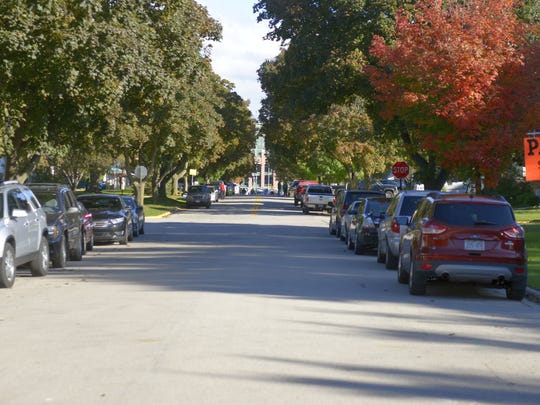