The Green Bay Packers will celebrate 100 years of playing football in 2018 and fans gave ideas of what the team could do to commemorate it during the annual shareholders meeting at Lambeau Field on July 24, 2017.

GREEN BAY - The biggest football news out of the Green Bay Packers shareholders meeting was about the NCAA.

The University of Wisconsin and Notre Dame are reported to be near a deal to play games at Lambeau Field and Chicago's Soldier Field.

"We've been working on that for a while and hopefully very soon we'll be able to make an announcement," Packers President/CEO Mark Murphy said Monday after the meeting at Lambeau Field. "A Notre Dame-Wisconsin game would be very special."

The Packers hosted Wisconsin and LSU in a game in September 2016. That was one of the highlights of the team's report on the past year, which, short of winning the Super Bowl, was a long list of accomplishments.

Those accomplishments included record revenue of $441.4 million, an eighth consecutive year making the playoffs, hosting a Billy Joel concert, the opening of Titletown District's three anchors, completion of the Johnsonville Tailgate Village building, and more than $1.5 million in grants to Wisconsin organizations.

RELATED: Lodge Kohler seeks to be grand, but approachable

The Wisconsin-Notre Dame game at Lambeau Field likely would be during the 2020 season. Before that, the Packers have more things to celebrate, including a two-year observance of the team's 100th anniversary. The 2018 season will be the Packers' 100th year of play and the 100th birthday falls on Aug. 11, 2019.

Murphy said details will be released later, but working ideas include a traveling exhibit, book, documentary film and special event to be revealed later. 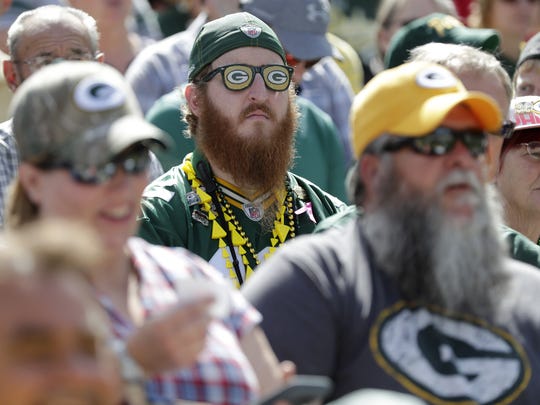 "A lot depends on what the league wants to accomplish with the draft," Murphy said. "I think some of the things we've done will help us make a strong case to the league."

Those things include renovation of the Lambeau Field Atrium and development of the Titletown District.

"We're probably not going to have the same attendance here (as in Philadelphia and Chicago), but to me, there would be some real advantages to the league to have the draft here," he said.

In response to a shouted question during the meeting, Murphy went off script to talk about the Packers' chance of holding a Super Bowl, which is not going to happen.

As an alternative, he said, the Packers would seek to "host every NFC championship game we can."

About 7,000 people attended Monday's meeting, which is less than the usual 8,000 or more. Murphy said that was disappointing, given the excellent weather and the Monday meeting day, the first time in memory it connected with a weekend. 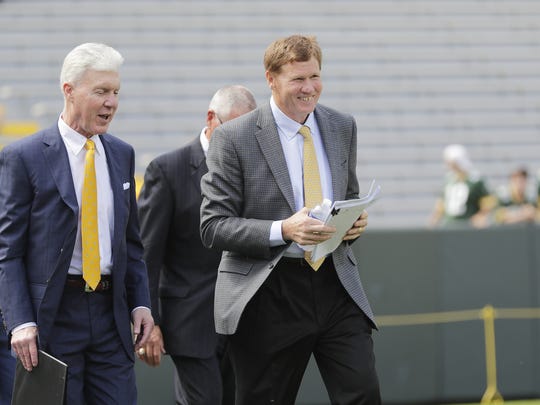 Jackie Pries, a Wausau native living in Minneapolis, said the shareholders meeting is a traditional start of the season.

"People get into it. It's kind of the kickoff for everything," she said. "We've been coming for a couple of years now. It's a good Monday in my book."

Murphy told shareholders the NFL made changes to shorten football games, including using tablets for instant replay, having fewer commercials and using split screens with advertisements and play overlapping.

That last idea concerns Steve MacSwain of Marshfield, who thinks there is too much going on in football to be reduced to a small screen.

"I am alarmed about the split screen idea," he said. I'm going to have to buy a bigger TV," he said.

Murphy said after the meeting that the team's investment in Titletown District is intended to help ensure the Packers stay in Green Bay. While there is no thought of it moving or reason to, things can change quickly in the NFL, he said.

"Maybe we have a collective bargaining agreement with no salary cap or revenue sharing is changed," he said.

Titletown District is the Packers' 35-acre commercial, recreational and residential district immediately west of Lambeau Field. The district's first three anchors will be open as of Tuesday, when Bellin Health Titletown Sports Medicine and Orthopedics opens. A 10-acre public park and plaza is scheduled to open in September.

"As I view Titletown District, it's probably the biggest investment we'll make in this community," he said. "It really helps ensure this team will stay here."

The sale of a photograph of quarterbacks Bart Starr, Brett Favre and Aaron Rodgers taken last year and sold by the team raised more than $70,000 for each of their foundations.

Two million dollars was raised in the communities visited by this year's Tailgate Tour. In addition, Packers players and employees raised $76,000 ringing bells for Salvation Army last winter, which included a $38,000 match by Rodgers, and the Packers bowling event in June raised $50,000 for Northeast Wisconsin Technical College.