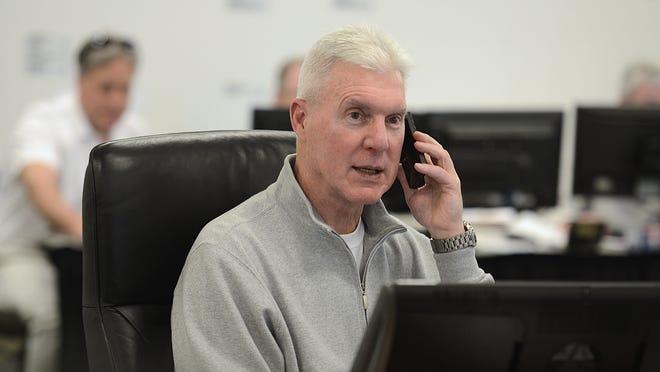 Parins was named the Packers' full-time security chief in 1992, the same year the young, irrepressible party-animal Brett Favre joined the team. One of the jobs of the security department, which at first largely consisted of Parins, was to keep players out of trouble.

"I know that Brett had several conversations with Jerry through the years," Bob Harlan, Packers chairman emeritus, drolly observed.

Parins' long and varied career included helping solve one of Green Bay's most notorious murders — that of Margaret Anderson in 1983 — while he was with the Green Bay Police Department, before  serving as the Packers security chief, and raising $1.5 million for cancer-related organizations.

He'll receive the first Bob Harlan Leadership Award during the Packers Hall of Fame Inc. banquet, which will include the induction of former general manager Ted Thompson into the hall. Team historian Cliff Christl will receive the Bart and Cherry Starr Recognition Award.

The Harlan award recognizes exceptional leadership qualities above the call of duty during or after the recipient's career or association with the Packers. Recipients must have served with integrity, character and determination, emblematic of Harlan.

Tickets for the induction banquet, scheduled for May 4 at Lambeau Field, are $250 for individual seats and $2,400 for a table of 10. To purchase tickets, contact Holly Borga at (920) 965-6986 or hollyb@packershalloffame.com.

Parins' time with the Packers began in the Lombardi era, when he was a Green Bay policeman and volunteered in his off hours to police sidelines during practice, and later to do other chores. One of his first adventures as a policeman was going nose-to-nose with an inebriated — and much larger — Ray Nitschke outside a bar on Broadway.

He survived that encounter and others, and when the Packers decided they needed to ramp up security, Harlan asked Parins if he would take the job. He didn't need to be asked a second time.

That empathy was apparent when Parins, a cancer survivor, invited Harlan to accompany him to a local children's cancer ward.

"Parents knew him and remembered him. He'd obviously been there before," Harlan said.

It was not unusual for Parins to be asked by general manager Ron Wolf or coach Mike Holmgren to look into a report — or more often rumor — on some player's behavior. If he reported back that the player claimed innocence, "Coach Mike would throw it right back on me and say, "Well, is he lying?' Now I laugh about it because this is how we worked."

Favre did cause Parins sleepless nights and was sometimes annoyed when the security chief told Holmgren about his activities, but he also presented Parins with an inscribed Rolex watch and kept in touch with Parins during his year-long battle with cancer in 2003.

The key, he said, was being fair and respectful to the players, but always putting the organization first.

It was Parins who taught Holmgren to ride a motorcycle, and it was Parins who was admonished by Holmgren for giving Favre a ride on the back of his bike from the practice field to the stadium.

Parins' world was upended when he was diagnosed with cancer in 2003. What followed was a more than year-long battle that he eventually won.

He combined his love of motorcycles and experience in Muscular Dystrophy Association fundraising rides to create the Jerry Parins Cruise for Cancer, held every year with the help of Vandervest Harley-Davidson in Howard and Peshtigo. During 15 years of rides, the event has raised $1.5 million for cancer-related organizations.

"Every year we seem to make more money to give back to organizations," Parins said.

He also participates in other cancer fundraisers, such as an annual chili and burger event at Drift Inn in Ashwaubenon in the fall, and golf and bowling events.

Parins is 80 now. Sandra, his wife of 56 years, died in 2017 and he misses her daily, but he's cancer free, has three daughters who keep an eye on him and he's about to be recognized by the Packers Hall of Fame. He does not complain.

"It turned out so good. I have three (Super Bowl) rings, three wonderful daughters. I've got everything," Parins said.

Christl to get Starr Award

The Bart and Cherry Starr Recognition Award honors a person who has exemplified outstanding character and leadership in their field of expertise while consistently demonstrating a personal conviction and commitment to the Green Bay Packers Hall of Fame and the preservation of Packers history.

He authored seven books, mostly about the Packers and pro football, and spearheaded creation of the Packers Heritage Trail with its 25 historical sites and downtown plaza recounting Packers’ history from Lambeau to Lombardi.

Christl talked about being Packers historian and his career in a Packers Plus interview in November 2018 (the link to the story is above). He is writing a book on the Packers' 100 years of football scheduled for publication later this year.