Lambeau Field may be shut down, but a lot is happening there and in the Packers universe

Constructions projects were not hindered by coronavirus shutdown, and shareholders will get letter soon.

Lambeau Field may be shut down, but a lot is happening there and in the Packers universe

GREEN BAY – Lambeau Field shut down on March 13, but a lot still is happening in the Green Bay Packers universe.

Construction in and around Lambeau Field continues apace and the Packers are preparing for a regular season, whether or not that comes to pass.

In the next couple of days, Packers shareholders will receive a detailed electronic letter from President and CEO Mark Murphy discussing the team's response to coronavirus, its contributions to relief efforts and how the team is functioning outside of Lambeau.

"The letter also makes mention of monitoring conditions with respect to gatherings and Badger Bounce Back and how that effects our plans for the annual meeting," said Aaron Popkey, director of public affairs.

Badger Bounce Back is Gov. Tony Evers' guidelines for ending his safer-at-home policy, allowing businesses to reopen and citizens to congregate. The Packers' annual shareholders meeting is held at the end of July, the same week as training camp opens. 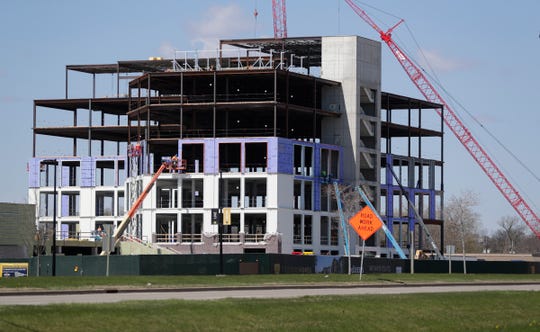 Construction companies were designated essential businesses in Evers' shutdown order, so work on projects in and around Lambeau Field continued.

Inside Lambeau, the Packers are converting more concessions areas to grab-and-go stands. The Packers say the self-service stands reduce waiting times for fans during games.

"We are expecting to be ready to host Family Night in late July or early August," Popkey said.

Because of concourse construction, the Packers turned down a request from Green Bay Area Public Schools to use Lambeau Field for socially distanced high school graduations, provided it was allowed under Evers' plan for resuming public activities.

"Unfortunately, because of construction, an event of that scope cannot take place inside the stadium," Popkey said.

East of Oneida Street, across from the stadium, renovation of Clark Hinkle Field is underway. The Packers' practice field is getting new SIS Grass turf, like that used at Lambeau, and an underground heating system. The project is scheduled for completion in time for the regular season, but it will not be used for training camp this year.

West of South Ridge Road, on the other side of Lambeau, Titletown District townhouse and office building projects remain on schedule. 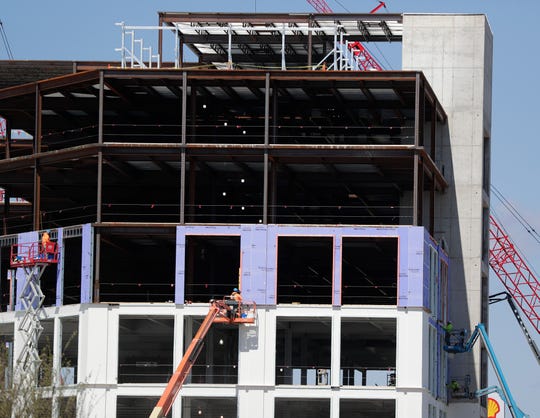 Construction on an adjacent 152-unit apartment building is scheduled to begin in summer. The building will include studio apartments and one-, two- and three-bedroom units.

The office building could open in early 2021, the apartments in late summer or fall of 2021.

Opening sooner will be the first of 50 to 80 townhouse units under construction on the south side of the district. They range between 2,300 and 2,900 square feet. Prices run from just under $700,000 for some on the south side of Brookwood Drive, to $1.2 million on the ends of the clusters adjacent to the Titletown District playgrounds and football field.

The first building, on the northeast end of Brookwood Drive, should be ready for occupation this summer.

James Viner of La Crosse will be featured on Packers tickets for one game during the 2020 season. (Photo: Courtesy of Green Bay Packers)

In other Packers-related news, Alexandra Viner of La Crosse won this year's Ticket Takeover contest with her photo of son James, who dressed as Aaron Rodgers for Halloween. More than 32,000 votes were cast.

The picture will be printed on 80,000 tickets for one game this year.

Thousands of photos were submitted by fans for the contest. Five finalists were chosen for fans to vote on. The Vines will receive two tickets to the game and one voter will be randomly selected to receive tickets as well.

Last year's winner was Trisha Brown of Green Bay. A photo of her granddaughter, Rylen, was on tickets for the Dec. 15, 2019, Fan Appreciation Game against Chicago.

Fritsch's obituary can be seen here.

A photo gallery by the Sheboygan Press of him celebrating his 98th birthday can be seen here. 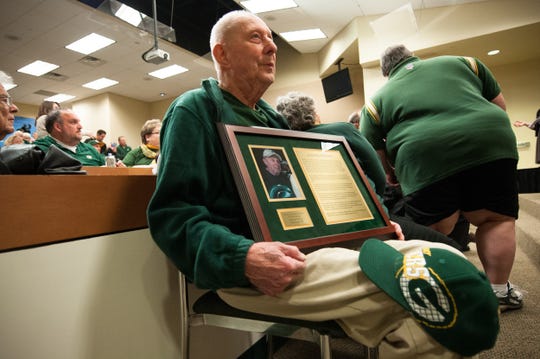 Ed Fritsch holds his plaque after being inducted into the Green Bay Packers Fan Hall of Fame in 2013. (Photo: USA TODAY NETWORK-Wisconsin)

Our subscribers make this coverage possible. Subscribe to a USA TODAY NETWORK-Wisconsin site today with one of our special offers and support local journalism.