Packers had another record-setting financial year and might get through pandemic year without tapping reserve fund.

Mark Murphy, Green Bay Packers president and CEO, talks about how the 2020 season likely will be impacted by the coronavirus pandemic. Green Bay Press-Gazette

GREEN BAY – The Green Bay Packers reported record revenue of $506.9 million for last year and indicated they might get through this pandemic-stricken year without dipping into their corporate reserve fund.

The NFL's smallest-market team, and the only one that reports its finances, passed the half-billion-dollar mark for the first time in the fiscal year that ended in March, just as the coronavirus pandemic shut down much of the country.

The Packers reported a 6.1% increase in total revenue, driven primarily by a $21.7 million, or 7.9%, improvement in national — i.e., television — revenue. Local revenue increased $7.3 million, or 3.6%, with increases in ticket prices, game-day sponsorships and Packers Pro Shop sales. The Titletown District also began to contribute to the bottom line.

Total revenue, rather than net income, is the more significant number in Packers' finances because all money, whether profit or not, goes into team operations or the community. Net income, however, does show how well the team keeps expenses under control relative to revenue. 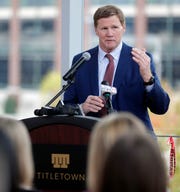 In 2018, Green Bay Packers president and CEO Mark Murphy talks about plans for TitletownTech, a 46,000-square-foot building with an innovation center and space for commercial businesses, across from Lambeau Field in Green Bay, Wis. (Photo: Sarah Kloepping/USA TODAY NETWORK-Wisconsin)

Expenses dropped significantly this year because of non-recurring costs the previous year, including free-agent signings, coaching staff changes, payments to a league-wide concussion settlement, and costs of the Packers' 100 Seasons celebration.

Packers President and CEO Mark Murphy said between 10,000 and 12,000 fans might be allowed into games this season because of coronavirus pandemic safety measures. With national revenue covering player costs, that would be enough fans to cover other expenses.

"I think we are safely north of what the break-even point is, just based on the current conversation of where the number of fans will be," said Paul Baniel, vice president of finance and administration.

The number of fans who will be allowed into the stadium will not be based on whether the team will profit, Murphy said.

"Any decision on fans will be made on health and safety reasons, not economic reasons," Murphy said. "We are following CDC guidelines."

The team might not dip into its $441 million corporate reserve fund if the NFL succeeds in having a season. Baniel said the team has lines of credit with local banks that will make using the reserve fund less likely.

The reserve fund itself recovered from a coronavirus-caused dip in investments in March and April. The fund had gone as low as $356 million, but is back to its pre-virus level.

"We've diversified to the point I feel really good about it," Murphy said.

Next year's report obviously will not be as good, Murphy said. Lambeau Field was closed from mid-March to the end of May, and activities such as stadium tours and events and conventions are still shut down.

Next year's report will not be record-breaking for the first time in years.

"We are in uncharted waters. It's hard to estimate what the impact will be this year, but we know it will be significant," Murphy said.