Gunter has one goal with Packers: ‘Make the team’

After going undrafted, rookie cornerback hopes to prove he has speed to make it in NFL

Gunter has one goal with Packers: ‘Make the team’ 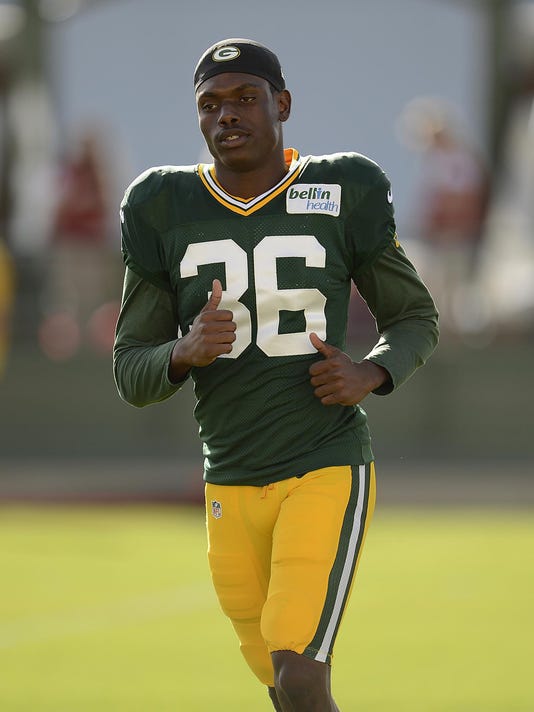 Three months ago, LaDarius Gunter was discarded. Too slow to play cornerback, the stopwatch suggested. So when 256 college players found jobs in the NFL Draft, he had to wait.

Yeah, Gunter admits now, he’s more than a little ticked off. The former University of Miami cornerback arrived in Green Bay in May, a free agent with one mission. “Make the team,” Gunter said. Anything less is unacceptable.

“I feel like people just overlooked me because I didn’t run as fast at the combine,” said Gunter, whose 4.69-second 40-yard dash was second-slowest among all cornerbacks in Indianapolis. “They overlooked that I was a football player instead of a track star. So it kind of makes me mad, and makes me want to prove them wrong every time I step on the field.”

A week into training camp, Gunter has already worked into the rotation on the Green Bay Packers’ first-team defense. And he’s making plays.

The rookie stared down quarterback Aaron Rodgers and receiver Jordy Nelson earlier this week. Before the snap, Gunter said he recognized down and distance. It was fourth-and-1. Only so many options for an offense. 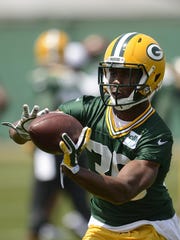 Green Bay Packers rookie cornerback LaDarius Gunter is working in the slot and on the perimeter this season. (Photo: Evan Siegle/USA TODAY NETWORK-Wis)

“It means a lot,” Gunter said, “But at the same time you can’t get big-headed about one pass breakup.”

Based on the Packers’ internal tracking, Gunter has made more plays than a single pass breakup.

Assistant coach Joe Whitt said his cornerbacks have covered 251 passes through the team’s first five training camp practices. Each snap is judged on a star system. Make a play against Rodgers and Nelson, Whitt said, and that’s 10 stars.

Naturally, Whitt said, Pro Bowl cornerback Sam Shields has more 10-star plays than anybody. But he has company. Gunter is near the top of the list.

Three months ago, Whitt admitted, he would’ve been surprised to see the rookie free agent compete with an MVP and All-Pro. By minicamp, his shock had worn off.

“He really doesn’t care who’s across from him,” Whitt said. “He thinks he can defend anybody. He’s shown the ability so far to make some plays.”

The Packers have seen a “Gunter” thrive in their system before.

In 2010, it was Shields. Undrafted out of Miami, he worked his way onto the Packers’ 53-man roster. Eventually, Shields became a starter.

Now he’s their No. 1 cornerback.

Shields and Gunter never crossed paths at Miami. Regardless, Shields said, he knew what to expect when he met Gunter at the start of organized team activities this spring.

“Coming from the U,” Shields said, "I knew what he had in him because most of the same coaches are still there. I know he’s not soft, so that was the biggest thing. Being in that position, you can’t be soft.”

Shields said he sees himself in the young, undrafted cornerback.

Gunter is quiet. He listens to the veterans, Shields said. No back talk. No disrespect. When a mistake is made, he corrects it.

“Being an undrafted free agent,” Shields said, “You have to do that. You just bite a lot of bullets and keep working.”

Gunter said he hopes to follow Shields’ path. The narrative is nice, but the two former Miami cornerbacks are different players.

A college receiver, Shields ran a blistering 4.26-second 40-yard dash before entering the league. Gunter, at 6-foot-1 and 201 pounds, is two inches taller and more than 15 pounds heavier. He must rely on being “not soft,” physically beating up receivers at the line of scrimmage.

“I think with his length,” defensive back Micah Hyde said, “He can get his hands on anybody at the line and run with them.”

Already, Whitt raves about how Gunter plays cornerback. He may lack track star speed, but the rookie arrived in Green Bay with impressive polish. This offseason, Whitt said Gunter has better technique than Damarious Randall or Quinten Rollins, the Packers’ first- and second-round draft picks.

“He’s a mature player,” Whitt said. “His mentality is a lot like Sam when he came in, that even though he’s a free agent and he’s a rookie, it’s not too big for him. He goes out there and works. He takes coaching. If I go out there and correct him on something, he does not make that mistake again. Where he’s different than most rookies, he asks great questions. He has a great understanding of where he wants to send receivers and the technique he wants to use.”

With his next breath, Whitt acknowledges Gunter still has “a ways to go.”

On Wednesday, general manager Ted Thompson warned against “crowning people kings” after a handful of practices. It would be tempting to get carried away with Gunter. Whitt isn’t going there.

Training camp is a long process. Gunter has more to prove, Whitt said. Ultimately, speed remains the biggest unknown. So far, Whitt hasn’t seen a play Gunter was too slow to make. But these are only practices. Games are faster.

If Gunter can prove he’s fast enough to play in the NFL, he’ll have a chance to make the Packers’ roster. Thompson, an undrafted linebacker four decades ago, has kept at least one rookie free agent on the 53-man roster every year since the Packers hired him as general manager in 2005.

Gunter hopes he’s next. He said Thompson’s track record – and the path Shields already blazed – were enticing reasons to sign with the Packers. After being overlooked three months ago, he doesn’t want this opportunity to pass.

“It was very hard watching (the draft),” Gunter said. “At the same time, I can’t let that define my life or how I live. After that day, it was out of my head. But I still knew that every time I put on the pads or step on the field, it’s going to be in the back of my mind.”