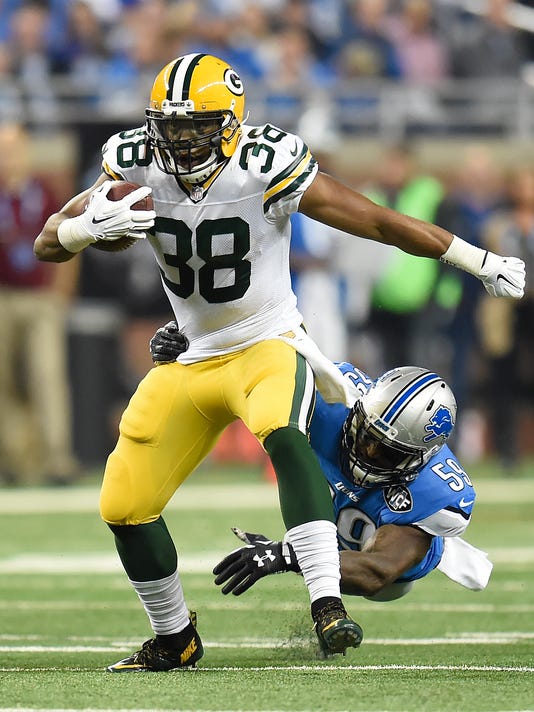 Every week I'll share four quick thoughts the day after the Green Bay Packers' game. Here they are after the Packers' 27-23 win over the Detroit Lions on Thursday night:

First down: Undrafted rookie running John Crockett made his NFL debut to start the second half and showed some ability to run between the tackles, but after he picked up 12 yards on his second carry, the Packers pulled him in favor of James Starks. My suspicion is that they saw Crockett running with the ball away from his body on that 12-yard run and got him out because they were concerned he might fumble. He returned at the end of the third quarter and had two more carries, one for 10 yards and another for minus-4. It’s worth noting that Starks fumbled later on that first drive of the third quarter, at about Detroit’s 5, but teammate Randall Cobb recovered in the end zone for the score. After the series, Starks served the punishment often doled out in practice when players fumble – he was on the sidelines doing pushups.

Second down: Josh Walker was put in about as tough a position as possible a backup offensive lineman could face when he had to replace injured left tackle David Bakhtiari early in the fourth quarter. Walker came in on a third-and-14 and the Packers trying to come back from a 20-14 deficit, so it was a given they were going to throw. He had to line up against the Lions’ best pass rusher, Ziggy Ansah. Detroit went after Walker hard by running a stunt with Ansah and defensive tackle Haloti Ngata. Ansah looped around Ngata to the inside and ran past Walker almost untouched on his way to sacking Aaron Rodgers. That was the only play Bakhtiari missed.

Third down: With the game on the line and the Packers desperate for a final defensive stop against Detroit’s four-minute offense, coordinator Dom Capers went with second-year pro Mike Pennel at one of the defensive ends instead of Letroy Guion. Guion has been a starter in the base 3-4 defense, along with B.J. Raji and Mike Daniels, but Pennel probably has outplayed him most of the season. Maybe Pennel has moved ahead of him on the depth charts.

Fourth down: Lost amid the Packers’ miraculous Hail Mary win Thursday night was the good job they did on receiver Calvin Johnson for the second time this season. Cornerback Sam Shields covered Johnson on most plays no matter where Johnson lined up, and Shields often had safety help over the top, but not always. Johnson had one incredible catch, his 17-yard touchdown reception in the first quarter on a fade pattern. Shields had tight coverage on the play, but Johnson overmatched him with his size (6-feet-4) and great leaping ability, plucked the ball from the air and tapped both feet before falling out bounds. However, for the game Johnson had only three catches for 44 yards, a total the Packers gladly lived with. When the teams met three weeks ago at Lambeau Field, Johnson had six catches for 81 yards and no touchdowns, also a more than manageable day from the Packers’ perspective.