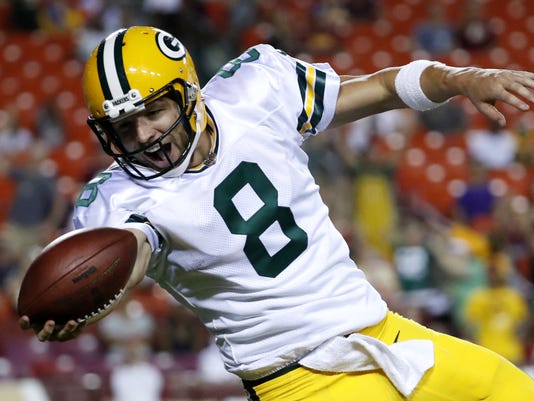 Green Bay Packers quarterback Taysom Hill (8) celebrates as he carries the ball into the end zone for a touchdown during the second half against the Washington Redskins in Landover, Md., Saturday, Aug. 19, 2017.(Photo: Alex Brandon, AP)

Welcome to your final preseason game day Morning Buzz, rounding up news and views regarding the Green Bay Packers from around the web and here at PackersNews.com. Grab a strong cup of coffee and get caught up on everything you need to know about the Packers as they get set to take on the Los Angeles Rams.

Tom, Michael and Ryan give us 10 players who will be feeling the pressure during tonight’s final preseason game.

Here are two from the guys:

Michael Clark, wide receiver: Perversely, the Packers might not mind if Clark struggled against the Rams. At 6-5½, 215 pounds and with remarkable leaping ability, Clark is the ideal practice-squad project for wide receivers coach Luke Getsy. But if Clark shows too much against the Rams, general manager Ted Thompson will have to consider putting him on the 53-man roster amid an already deep receiving corps. Clark's name has generated significant buzz during training camp, and the Packers don’t want to lose him on the waiver wire. Clark has four catches for 34 yards and a touchdown through three exhibition games.

LaDarius Gunter, cornerback: It would be a dramatic fall if Gunter went from No. 1 corner a year ago to potentially getting cut in 2017, and Gunter is squarely on the roster bubble. The same lack of speed that plagued Gunter at times last year proved highly problematic during the first two weeks of camp. He gave up a number of deep balls down the sideline and struggled when asked to make up ground. But cornerbacks coach Joe Whitt Jr. moved Gunter to the slot around the midway point of camp, and that decision triggered a small revival. With his size and length, Gunter brings a different element to the “star” position than teammates Quinten Rollins and Damarious Randall. At this point, Gunter is fighting for one of the last two spots at the cornerback position.

Tom has 5 Things To Watch during tonight’s game:

Keep your programs handy tomorrow night, #Packers fans. There will be some unfamiliar names. https://t.co/3Yhkihrhf7

I gave some thoughts on the signing:

.@AaronNagler on Ahmad Brooks signing: "You have to think this can only spell good things for Dom Capers' defense going forward." pic.twitter.com/gdupjuPxgl

If you missed Pete Dougherty’s chat yesterday, you can catch a replay here:

It's time to talk #Packers! Join @PeteDougherty in his chat now with your questions ahead of tomorrow's game. https://t.co/fCMf1uUKeDpic.twitter.com/rb4LT4t9QI

Get ready to hear a lot of Tony Romo early in the season:

Four of the #Packers' first five games will be called by former #Cowboys QBs. https://t.co/IEVuLQF8Tz

.@undisputed | Greg Jennings thought Brett Favre quit on the #Packers during a 2007 game against the Cowboys pic.twitter.com/gx1zLE4DFj

What does the Stafford mega-deal mean for Rodgers? https://t.co/kJJ8nY96I6pic.twitter.com/qHkDp1kV9N

The Packers Wire looks at the players with the most to lose tonight:

5 players with most to lose in Packers' preseason finale vs. Rams https://t.co/mOL0oii5WC

Rodgers and Brett Hundley went with the Men In Black as their theme for the team’s Welcome Back Luncheon:

Here come the Men In Black 😎

One fan apparently wanted a bit more than a “hello.”

Apparently a hello just wouldn't suffice! #Packers fan kisses @AaronRodgers12 on head at Welcome Back Lunch. He plays it off perfectly. pic.twitter.com/orb85VpFp6

Rob Demovsky writes on the kind of player the Packers are getting in Ahmad Brooks:

It’s always a good time to take a look back at Homer and Favre:

The Packers’ are playing the L.A. Rams tonight (still feels weird to be calling them that again) which signed legendary back Eric Dickerson to a one day deal so he could retire with the club:

Hall of Fame RB Eric Dickerson will sign a 1-day deal to retire with the L.A. Rams 24 years after his final NFL season. pic.twitter.com/8RJEmlIDJi