Packers return to practice minus only Bulaga

The only player missing on the Green Bay Packers' first day of practice after roster cuts was right tackle Bryan Bulaga.

Packers return to practice minus only Bulaga

Ryan Wood and Aaron Nagler discuss a busy weekend from Ted Thompson and the Green Bay Packers and the contract extension for guard Lane Taylor. 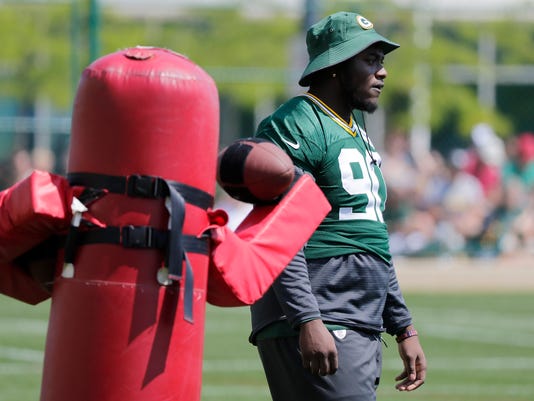 GREEN BAY - After a three-day break in which the players found out who was coming and going, the Green Bay Packers returned to practice Monday.

And they appeared to be in pretty good shape where injuries are concerned.

The only previously injured player on the 53-man roster who did not take part in the workout was right tackle Bryan Bulaga, who is recovering from a right ankle sprain. The Packers don't have to release an injury report until Wednesday, but last week coach Mike McCarthy said he did not have a major concern regarding Bulaga's availability for the season opener Sunday.

Five players who sat out the Los Angeles Rams exhibition Thursday because of injury took part in the Packers' first practice of Week 1.

RELATED: For the Packers this season, the goals haven't changed

The most surprising development was the return of rookie defensive tackle Montravius Adams, who had been out since undergoing foot surgery the first week of training camp. Adams took part in all of the individual drills. He said after practice that he did not take part in any team drills and is working to regain the form and confidence he once had in his foot.

After missing all but a day of training camp, it's going to take several weeks for Adams to be ready to play in a game. But the Packers want to start the process as soon as possible because they think Adams can help their pass rush this season.

“It was all right,’’ Adams said. “I could tell I'm not back to the same person. But it was a good first step. Right now, I just have to make sure I'm healthy. If I'm not healthy it doesn't matter.

"No player is 100 percent, but anybody can be mentally 100 percent, so I'm just trying to make sure I'm there. It was a good day."

In addition, safety Kentrell Brice, who injured his shoulder in the Rams game, practiced.

The Packers are off Tuesday and then will practice Wednesday, Thursday and Saturday before facing the Seattle Seahawks on Sunday at Lambeau Field.