Opposite Sideline: Drama not slowing down Steelers

The lowdown on the Green Bay Packers' next opponent from a beat writer who covers that team.

Opposite Sideline: Drama not slowing down Steelers

Aaron Nagler speaks with Chris Adamski of The Pittsburgh Tribune-Review about the Packers' upcoming opponent, the Pittsburgh Steelers. 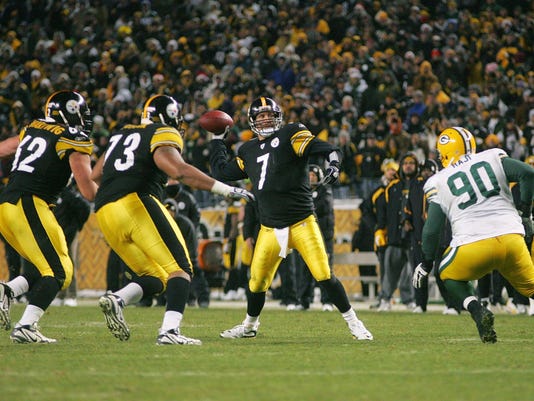 Steelers quarterback Ben Roethlisberger looks to pass during a December 2009 game against the Packers.(Photo: Getty Images)

The lowdown on the Green Bay Packers' next opponent from a beat writer who covers that team.

The Green Bay Packers couldn’t muster a single point at home against the Baltimore Ravens last Sunday and now head to Pittsburgh to take on the Steelers in a prime-time matchup that has the potential to get out of hand quickly for the reeling Packers.

To get a better idea of what kind of team Green Bay will be facing Sunday night, we caught up with Steelers beat writer Chris Adamski of the Pittsburgh Tribune-Review. You can find part of our exchange below and also in the video above.

1. How will Marcus Gilbert's suspension affect the Steelers' offensive line?

In terms of how it has functioned in 2017, the answer is “not much.” And that’s not a knock on Gilbert, whom many around here heavily campaigned for him to make the Pro Bowl last season (if there were separate categories for left and right tackles, he perhaps would have made it). But this season he has already missed significant time because of a nagging hamstring injury that has limited him to only three full games.

Chris Hubbard has been more than adequate in filling in; he’s been the Steelers’ right tackle for the majority of the snaps in six of their 10 games. He’s not Gilbert – but he almost assuredly will be a starter somewhere in the league next season, as Gilbert’s fortune came at a perfect time for him (it’s Hubbard’s contract year).

2. How real is the Steelers' perceived tendency to play down to an inferior opponent?

Some of it is very real, some of it has become sort of larger-than-life exaggerated urban myth, some of it the cause of circumstance. Two examples of the latter: last season, a loss at the 1-4 Dolphins was seen at the time as a stinker. Well, Miami won nine of 10 and made the playoffs. The season before, a loss at the 1-5 Chiefs was a disaster. Well, Kansas City never lost again that regular season.

Still, there are other examples of just purely bad teams beating Mike Tomlin’s Steelers. Too many to excuse, even in a league in which parity reigns. (The most glaring example was laying an egg at a 4-10 Baltimore – which was starting newly-acquired Ryan Mallette – two days after Christmas 2015 that knocked the Steelers out of a playoff position). It happened earlier this season when the Mike Glennon Bears (2-7 in all other games) beat the Steelers in overtime.

The bad news for the Packers? The vast majority of these losing-as-a-big-favorite games for the Tomlin Steelers have been on the road.

3. How has T.J. Watt played so far in his rookie campaign?

A month or so ago, there was legitimate chatter he was a defensive rookie of the year type. Now, that seems far-fetched. Watt has appeared to hit something of a rookie wall – or maybe opponents are adjusting to him. He was a revelation during summer workouts and training camp, easily passing the proverbial “eye test” as a standout.

He had a pair of sacks on his first preseason series, and then a pair of sacks in his NFL regular-season debut. A groin injury slowed him, and since coming back he hasn’t been as productive or disruptive. But there’s no doubting he has playmaking ability – be it sacks, batted-down passes, interceptions… Watt seems to have “it.” It just hasn’t shown much over the past month or so.