Morning Buzz: All the pressure is on the Packers

Morning Buzz: All the pressure is on the Packers

Aaron Nagler takes to Facebook Live to talk the latest on Packers and answer your questions. 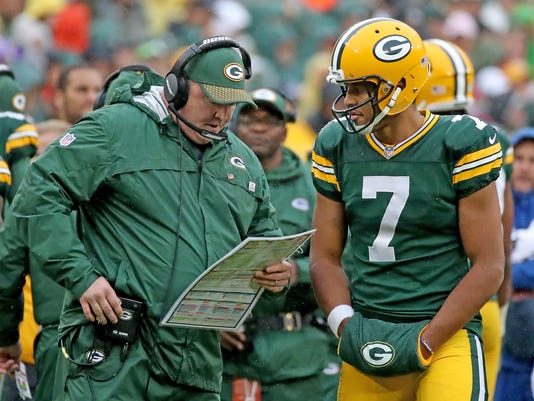 We’ll start with Pete Dougherty’s latest column which looks at the pressure around the Packers not to be the first team this season to lose to the Cleveland Browns.

The Browns are the undisputed worst team in the NFL. They’ve won only one of their last 31 games.

The Packers, playing on the road with a backup starting at quarterback, are a 3 ½-point favorite. That’s nothing like the 13-point favorite they were in '97, but it’s the first time they’re been favored in three road games with Brett Hundley at quarterback.

Yes, if the Packers don't beat the Browns, they'll be ridiculed nationally and vilified locally. It would confirm the worst take on their team: that they’re nothing without Rodgers.

It doesn’t matter that they’ve already won two games with Hundley at quarterback. A loss Sunday would be unforgivable.

From a psychological standpoint, coach Mike McCarthy is fortunate this is essentially a must-win game for his 6-6 team – a loss all-but-mathematically would knock them from the playoff race. That urgency could move Cleveland’s winless record from front-and-center in his players’ minds.

In what is a serious blow to the Packers' defense, the team placed rookie cornerback Kevin King on injured reserve Wednesday:

King suffered a torn labrum in college and said he started having trouble with the shoulder in his senior year. https://t.co/zvTLF0zh2t

Aaron Rodgers put on a bit of a show throwing the ball at practice Wednesday:

Rodgers showed good zip on his passes, especially on out routes to the sideline. https://t.co/k6fZV5mC1o

Michael Clark was surprised he got the call up to the 53 -man roster:

Michael Clark: “They just told me I was doing a good job and that they felt it was the right thing to do to bring me up.” https://t.co/GrM8Vbtibb

The New York Times reported that Goodell's extension is for an additional five years. https://t.co/DWc1JBi5qx

Elsewhere, the Playbook crew previews Sunday’s game against the Browns:

I joined the Locked On Browns podcast to give them the lowdown on the Packers:

and here is the latest @lockedonbrowns "Packers Prep" with my man @AaronNagler everything you need for Sundays game. Also this game is huge in the eyes of everybody Packers related. #Brownshttps://t.co/ONcnG1zgOV

The Power Sweep looks at the curious use of Jeff Janis and Trevor Davis:

Packers WRs Jeff Janis and Trevor Davis the only 2 NFL WRs who have been on a roster since Week 1 and who have played over 70% of their snaps on special teams. It's a tremendous waste of a roster spot and a questionable deployment of resources. https://t.co/28cQf4xbH8

Rob Demovsky looks at the play of Randall Cobb:

Hard for Packers' Randall Cobb to deliver without the ball in his hands https://t.co/SlhSqR4LDM

Dean Lowry joined some rare company this past Sunday:

Ike Taylor looks at the overtime drive against Tampa Bay:

The Packers Wire looks at the lack of impact from the defensive rookie class:

Packers failing to get impact on defense from rookie draft picks https://t.co/ahawyPQXW9

Brian Baldinger breaks down the final play against the Bucs:

.@packers@Showtyme_33 goes 20 yards to paydirt in OT for only run of the day and the Pack keep playoff dreams alive #BaldyBreakdownspic.twitter.com/izao8Z5ENV

It’s that time of the year again. If you haven’t voted for your favorite #Packers players go vote. If you have, go vote again. 👉👉👉👉👉 https://t.co/WPhVeqxETRpic.twitter.com/7vUwcJ1FSO

That @Big__Blake50 should man the middle of the @packers defense for a long, long time. Gets better every week. Pro Bowl level performance this season. pic.twitter.com/futMyLhQVe

Clay Matthews will have family in the house on Sunday:

#Packers LB Clay Matthews said his dad, Clay, who played for #Browns, will be at game Sunday in Cleveland. Added his father "is at peace" with his career & not winning a Super Bowl, also not lobbying to make the @ProFootballHOF