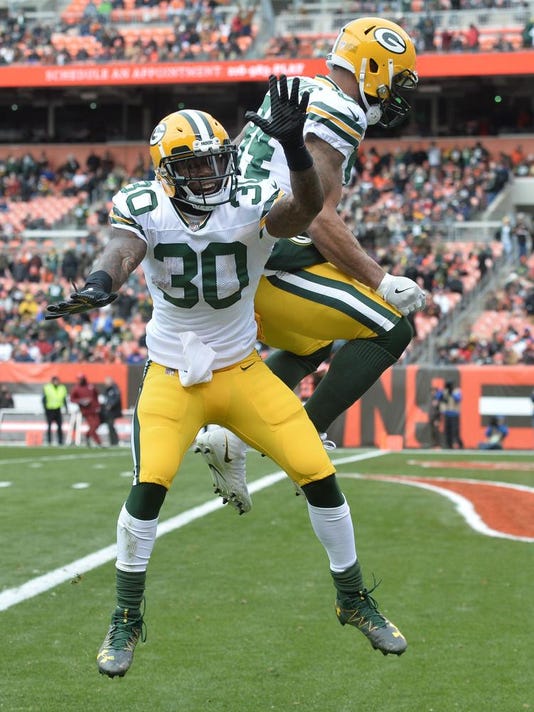 Welcome to your Morning Buzz, rounding up news and views regarding the Green Bay Packers  from around the web and here at PackersNews.com. Grab a strong cup of coffee and get caught up on everything you need to know about the Packers after their overtime victory in Cleveland.

We’ll start with Pete Dougherty’s look at what is still an uphill climb to make the postseason for the Packers.

Somehow, the Green Bay Packers turned the most humiliating of defeats into an inspiring comeback win that saved their 2017 season for another week.

The Packers’ rally from a two-touchdown deficit in the fourth quarter to beat the Cleveland Browns in overtime was the ultimate survive-any-way-you-can victory. That it was against the NFL’s only winless team matters not a wit. A win is a win is a win, and the Packers’ only charge Sunday was staying in the hunt.

Now they’re looking at the very real prospect of getting back Aaron Rodgers from a broken collarbone this week, and with that, a world of possibilities open. But at 7-6, they almost surely have to win their final three games, including the next two against NFC contenders: at Carolina (9-4) and at home against NFC North leader Minnesota (10-3).

You might think McCarthy is maddeningly conservative — except for those times when he’s sickeningly aggressive. https://t.co/3Opgp7RsZ3

Tom also looks at another stellar outing from Damarious Randall:

“He had one catch,” Randall said. “Any more questions?” https://t.co/xXwCq9JWOi

Great Win for them but let’s be serious.. Considering several of our disadvantages as a team, this kid couldn’t hold my jock strap on my worst day lol..@RandallTimehttps://t.co/ennvwjTMUH

Ryan Wood writes on Brett Hundley’s play in the clutch:

“He plays his best football when the game is on the line. You can’t teach that. He’s a winner.” https://t.co/mBuWOqFQU6

Stu Courtney has this week’s Insider:

Who gets your thumbs up/down for Week 14, #Packers fans? https://t.co/ALqtAfTg0u

Michael Cohen has five quick takeaways from the game:

Another week, another walk-off win for Brett Hundley and the #Packers. https://t.co/IIjak9I6w1

Tom and Michael break everything down on the latest Packers Podcast:

I listened to voicemails from Packers fans after the game:

New from JSOnline and PackersNews: Listening to Packers fans' voicemails after the overtime win in Cleveland https://t.co/MK5xrQwxKP#Packers

Elsewhere, Michael joined NBC26 to talk about the game:

Rob Demovsky writes on the Packers giving reason for Aaron Rodgers to return:

The Packers made history Sunday:

Today's victory gives the Packers three overtime wins in one season for the first time in franchise history.

The Packers rode the wave with Brett Hundley:

Packers might have survived riding the wave with Brett Hundley https://t.co/A9OliGL4rM

Speaking of Adams, he had a response for LeBron James:

Everyone is getting excited about the possible return of Aaron Rodgers:

"We're like a zombie. We're undead. We refuse to just go down, which is a nice characteristic you want for a team"

The NFL has highlights from the game on their YouTube channel: