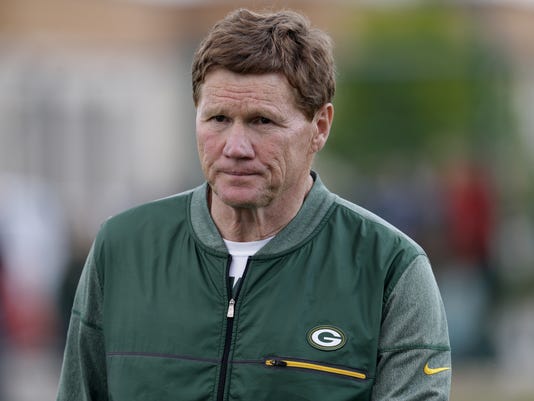 We’ll start with Tom Silverstein’s column on what the Packers are looking for in their new general manager.

Saying he will keep an open mind while selecting Ted Thompson’s replacement as Green Bay Packers general manager, president Mark Murphy made it clear Tuesday that candidates don’t need to have a scouting background to be considered.

It was a public acknowledgment that Russ Ball, the Packers’ vice president of football operations/finance — whom many people in the organization expect to get the job — won’t be hindered by the fact he has held only administrative positions.

The Packers have never had a general manager who wasn’t a player, on-field coach or scout and their last two, Thompson and Ron Wolf, had decades of experience evaluating talent before taking over the job.

The only thing Murphy will require of his hire is that he accept Mike McCarthy as his head coach.

On the same day Murphy addressed reporters on his decision to move Thompson to an advisory position and begin the search for a successor, he confirmed McCarthy had been signed to a one-year contract extension during the season.

Mike McCarthy is still in the Packers plans:

Murphy said McCarthy will remain the head coach. "Mike is our man." https://t.co/6B24hLLYCs

Pete Dougherty writes that Reggie McKenzie could be a possibility:

Russ Ball? Eliot Wolf? John Schneider? Who would you pick as the #Packers' next general manager? https://t.co/B3WsPemS0r

A look at 5 hits and 5 misses from Ted Thompson’s drafts:

Mark Murphy won’t box in a new GM with ideas on how the job should be done:

If the #Packers' new GM wants to be more active in free agency, Mark Murphy won't stop them. https://t.co/MBA5MLvNU5

Some players were at a loss for words when asked to explain the defensive woes. https://t.co/fSQboPD1CR

Ted Thompson thank you for bringing me to Green Bay in 2006 and giving me a chance to play in the green and gold. Enjoy your new role, We’ll always have SBXLV @packers#GoPackGo

Rob Demovsky spoke with Highsmith about his jump to Cleveland:

Details on Alonzo Highsmith's decision to leave the Packers for the Browns: https://t.co/rO0ZQRER8U

Michelle Bruton writes that you can’t always get what you want:

On @CheeseheadTV: Green and Bold: You Can't Always Keep Your Homegrown Talent https://t.co/sPb0CSD0CR#Packerspic.twitter.com/ImRubIPELA

Adam Schein gives his take on the Thompson move:

LeRoy Butler did not make the latest cut for the Hall of Fame:

THANK YOU TO ALL THE FANS THAT VOTED FOR ME TO MAKE THE HOF, sorry to say i am not a FINALIST THIS CLASS, but being a semi finalist was awesome, i know one day my name will be called, so better luck next year packer fans, lets get JERRY KRAMER IN!!

At https://t.co/DpWOlcUvDF: #Packers FS Clinton-Dix should have been removed from the lineup by the coaches and replaced by someone that was interested in playing after his listless, playing-not-to-get-hurt showing Sunday against the #Lions. His tape for 60 minutes was awful.

The Packers could change things up on offense as well:

Someone thinks the Packers are underachieving: