Rounding up the best NFL draft content with just over a week until the big event. 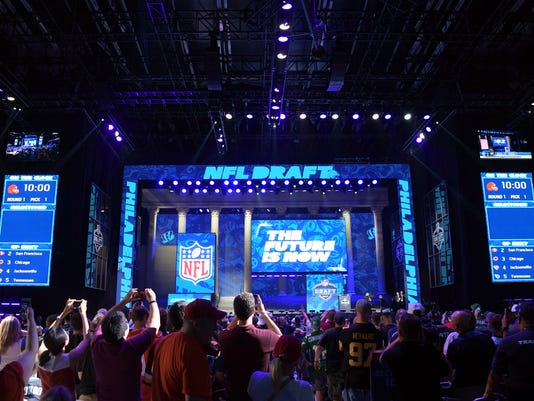 A general view of the draft theater during the first round the 2017 NFL Draft at the Philadelphia Museum of Art.(Photo: Kirby Lee/USA TODAY Sports)

With just over a week until the NFL draft, the buzz is building all around the top of the draft and rumors are swirling about teams looking to jump up and grab a quarterback.

NFL Media’s Daniel Jeremiah and Bucky Brooks got draft fans buzzing the other day by dropping the following:

What does it all mean? Only eight more days until we find out.

ESPN’s Kevin Seifert has a great feature on South Dakota State tight end Dallas Goedert, who some consider to be the best tight end in the draft:

How does a tight end from a tiny South Dakota town get first-round @NFL draft buzz? Dallas Goedert’s story begins with a miracle. Our story: https://t.co/YvKL2AUrMe

Longtime NFL Matchup producer and tape maven Greg Cosell has been sharing his evaluations of various draft prospects and they are very much worth your time.

Today's evaluation is Lamar Jackson. A lot there, and a lot of factors and variables as you transition him to the NFL. Smart reasonable people will have different points of view re: Jackson. There's no question he will generate much discussion in NFL organizations. pic.twitter.com/0e0MBuqLKa

USA Today Sports looks at the best fits for the Top 5 QBs in this year’s draft:

Kalen Ballage is an intriguing running back prospect out of Arizona State. Matty Brown has a great breakdown of his game over at Inside the Pylon:

Kalen Ballage may not have his entire game all together quite yet, but he is a very intriguing athletic player. Come see what @mattyfbrown has to say about the athletic runningback's potential fit at the next level! #sports#football#ASU#NFLdrafthttps://t.co/X2JWok8aLx

One of the most inspirational stories in the 2018 NFL Draft belongs to @IndianaFootball's Ian Thomas. pic.twitter.com/wABw5clRCG

Pro Football Focus continues to get to the bottom of various draft narratives:

. @PFF_Steve tears down some (and confirms others) popular NFL Draft narrativeshttps://t.co/bi4h7hQaHVpic.twitter.com/sl39jIcUWZ

Everybody has some draft crushes:

Draft crushes: we all have 'em. Here are ours. https://t.co/XGcNjh395L

Fitzpatrick himself broke down his game on Get Up!

Joe Marino has sleepers for every position on the offensive side of the ball:

My top offensive sleeper at each position for the 2018 #NFLDrafthttps://t.co/x3YVHm4Yns

Matt Miller digs into why the drafts consensus top receiver isn’t getting the usual hype:

Where's the Love for Calvin Ridley? Why the Draft's Top WR Doesn't Get More Hype https://t.co/FffO7BcEcT via @BleacherReport

Charley Casserly gives us a draft history lesson on one of the biggest trades the league has ever seen:

The story behind the @Redskins trade with the @Saints ”The Ricky Williams Trade” where the Saints traded 8 picks and we in turn used some of them to trade back up for future Hall of Famer Champ Bailey @NFLDraft@nflnetworkpic.twitter.com/QR5upPFQDO