Aaron Rodgers passed for only 189 yards and one touchdown with an interception Thursday, a rare poor showing in Week 1

Aaron Rodgers (still) may go down as the most successful opening act in Packers quarterbacking history.

To do so, he'll have to avoid performances such as the clunker he unloaded Thursday night at CenturyLink Field.

Green Bay had the honor of opening a season against a defending Super Bowl champion for the first time. They weren't up to the task falling 36-16 to the Seahawks.

Given the one-sided outcome, the Packers might petition for the Lions at Lambeau Field to usher in 2015.

The Seahawks confounded at every turn. They outdid Green Bay here and they proved cagier there.

Green Bay's ace in the hole is Rodgers. When he's on, the Packers have the look of a contender.

When he struggles, well, Seattle demonstrated just what can happen.

A case can be made that Rodgers has been more ready to kick off a season than any passer in team history. His rating of 101.4 in his first six openers was greater than that of Brett Favre (82.8) or Lynn Dickey (79.8) the two gentlemen who rank second and third.

Green Bay Packers center Corey Linsley (63) looks back at quarterback Aaron Rodgers (12) for signals during the game against the Seattle Seahawks at CenturyLink Field in Seattle on Sept. 4, 2014. Jim Matthews/Press-Gazette Media
Fullscreen 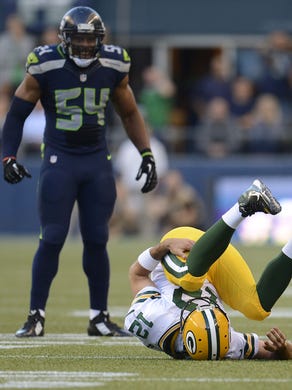 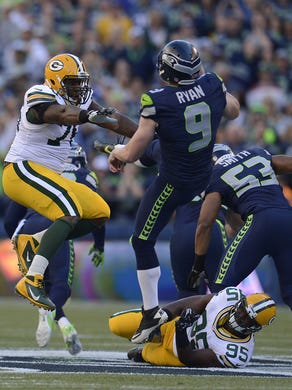 Green Bay Packers defensive tackle Mike Daniels (76) runs into Seattle Seahawks punter Jon Ryan (9) in the first quarter during their Week 1 game at CenturyLink Field in Seattle. Daniels was called for a penalty on the play. File/Press-Gazette Media
Fullscreen

Rodgers dialed up something special in his first NFL start. His TD toss to Korey Hall opened Green Bay's scoring, and the young quarterback (115.5 rating) didn't throw an interception in a 24-19 win over the Vikings.

He was exceptional against the Saints in 2011. Scoring passes to three different receivers lifted his rating (132.1) and helped the Packers escape with a 42-34 win.

His first half at Lambeau Field that evening was sublime. Greg Jennings, Jordy Nelson and Randall Cobb all snared a TD pass as Rodgers went 18 of 24 for 227 yards (143.6).

The first two quarters have been crucial the 16 times the Packers have opened on the road. In nine of their 10 wins, they held halftime leads.

But Pittsburgh, which won but twice that season, was no Seattle. The Seahawks brought with them the best record from the prior year (13-3) of any team Green Bay has faced in a season opener on the road.

Thursday they demonstrated why they win so often.