Big outing has Nelson off to record start

Big outing has Nelson off to record start 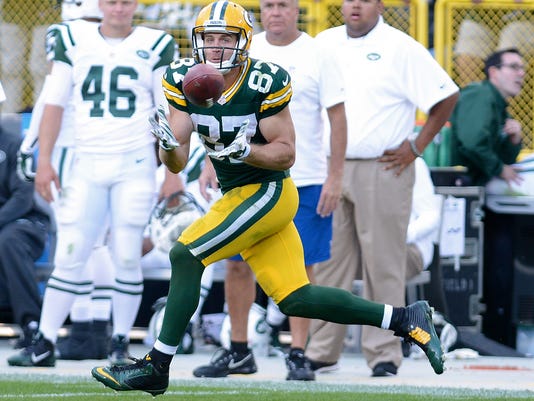 Packers receiver Jordy Nelson hauls in a catch that he would take 80 yards for a touchdown in the fourth quarter.(Photo: Kyle Bursaw/Press-Gazette Media)

Jordy Nelson is off to the best start by a receiver in Packers history.

His timing is impeccable as Green Bay needed everything he could provide in mounting the second-greatest come-from-behind win in Lambeau Field history.

Nelson snagged nine passes for a career-best 209 yards as the Packers rallied past the Jets 31-24. The seven-year veteran accumulated more yards than all of New York's receivers (176) put together.

Nelson has become the go-to receiver in Green Bay. He set personal bests with 85 receptions for 1,314 yards last season.

No. 87 shows no signs of slowing down. He caught nine passes in Seattle in the opener and matched that against the Jets.

His 18 catches are the most by a Packers receiver in the first two games of a season. Ken Payne had been the record holder with 17, including 12 against the Broncos in Week 2 in 1975. 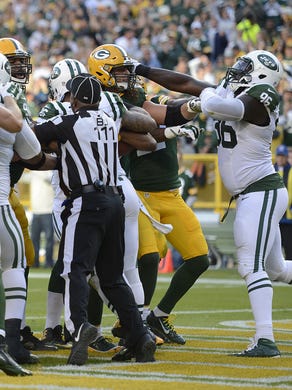 Green Bay Packers quarterback Aaron Rodgers and Corey Linsley congratulate each other after the Packers scored on a 80-yard touchdown reception against the New York Jets. Evan Siegle/Press-Gazette Media/@PGevansiegle
Fullscreen 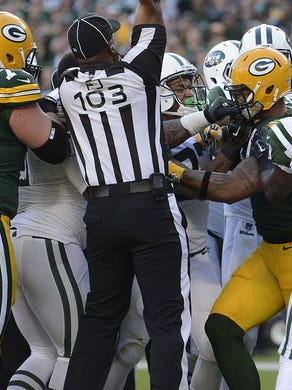 Green Bay Packers tight end Andrew Quarless (81) and New York Jets defensive lineman Sheldon Richardson (91) get into a scuffle at the end of a play in the third quarter during Sunday's game at Lambeau Field. Evan Siegle/Press-Gazette Media/@PGevansiegle
Fullscreen

Green Bay Packers receiver Jordy Nelson runs with the ball after making a catch in the fourth quarter during Sunday's game against the New York Jets at Lambeau Field. Evan Siegle/Press-Gazette Media/@PGevansiegle
Fullscreen

Green Bay Packers receivers Randall Cobb and Jordy Nelson share smiles to the crowd as they walk off the field after Sunday's game at Lambeau Field. The Packers defeated the Jets 31-24. Evan Siegle/Press-Gazette Media/@PGevansiegle
Fullscreen 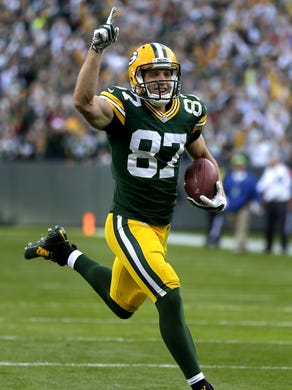 Green Bay Packers Aaron Rodgers is about to be hit by Jets lineman Leger Douzable (78) as he blows past Derek Sherrod (78) against the New York Jets at Lambeau Field. Jim Matthews/Press-Gazette Media
Fullscreen

Green Bay Packers safeties Sam Shields (37) and Morgan Burnett (42) break up a fourth down pass to receiver Jeremy Kerley (11) in the end zone to seal the win against the New York Jets at Lambeau Field. Jim Matthews/Press-Gazette Media
Fullscreen

Green Bay Packers safeties Sam Shields (37) and Morgan Burnett (42) break up a fourth down pass to receiver Jeremy Kerley (11) in the end zone to seal the win against the New York Jets at Lambeau Field. Jim Matthews/Press-Gazette Media
Fullscreen 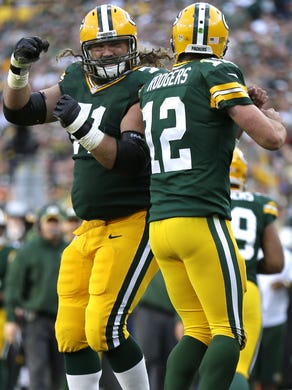 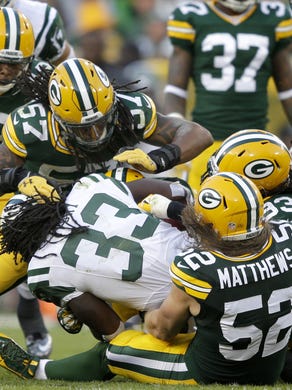 Nelson has been targeted a whopping 30 times. Randall Cobb is the only other player in double figures at 15.

One catch was a scoring drive in itself. After faking a handoff to Eddie Lacy, quarterback Aaron Rodgers found Nelson near midfield and the elusive receiver outraced Jets cornerback Dee Milliner to the end zone.

The score was the final one of the game and gave Green Bay its largest lead.

The excitement that play generated was missing early. The Packers managed minus-1 yard on their first five offensive plays and fell behind 14-0.

A 31-yard Mason Crosby field goal cut the deficit to 11. But Geno Smith directed the Jets to a third touchdown in as many possessions and New York went up 21-3 early in the second quarter.

Only once before had the Packers come back from 18 or more points down at Lambeau Field. Don Majkowski threw for 354 yards and three TDs as Green Bay rallied from 21 down to beat the Saints 35-34 on Sept. 17, 1989.

Nelson had two receptions to help the Packers to their first lead. Catches of 11 and 33 yards made up the bulk of a 67-yard march that culminated in Rodgers' 1-yard scoring pass to Randall Cobb.

Rodgers then connected with Cobb on a 2-point conversion and Green Bay went up 24-21.

Nelson had two catches in the fourth quarter. His second, for 15 yards on third down, allowed the Packers to run out the clock.

Don Hutson became the first Packer to secure 100 passes in an 18-game span in the early 1940s. Nelson has become the most recent.

In his last 18 regular-season games, Nelson has caught 103 passes for 1,606 yards. He's caught five or more passes in 11 of those games and has gained 100 or more yards six times.

Nelson's big outing against the Jets is more evidence that the gifted receiver should be considered among the greatest to have played for the Green and Gold. His nine receptions moved him into a tie with fullback William Henderson (320 catches) for 11th place on the team's all-time receiving list.

Packers players with the most catches in the first two games of a season.