Maiorana: Bills can ease draft picks into roles but they're the hunted in improved AFC East 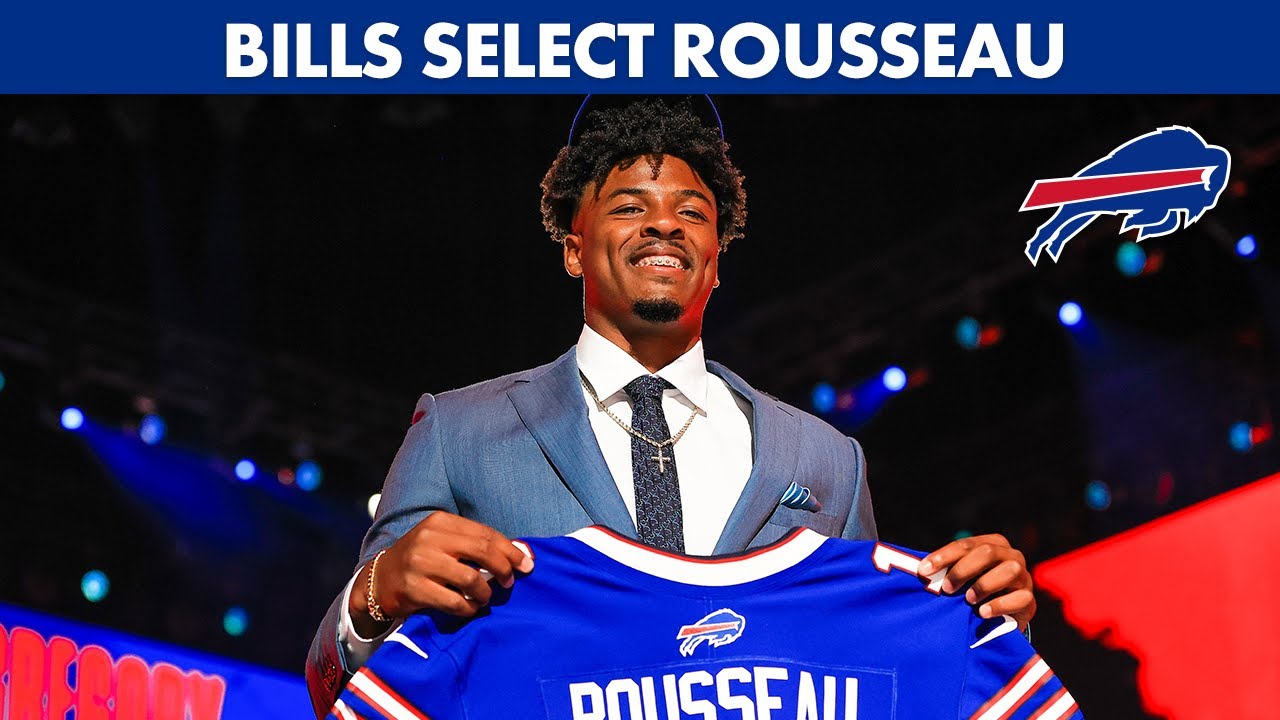 Picking as late as they did on the first two days of the 2021 NFL Draft, rounds one through three when teams procure the bulk of their future starters and key contributors, fans will have to be patient with the Buffalo Bills’ 2021 class.

Back in those awful days when the team missed the postseason for 17 years running, the Bills were picking early in almost every round. Not only is it generally easier to hit home runs – or at the very least triples and doubles – on the first two days, but those players will typically play meaningful roles right away.

But coming off an appearance in the AFC Championship Game, the Bills made the 30th, 61st, and 93rd picks on Thursday and Friday. And in defensive ends Greg Rousseau and Carlos Basham, and offensive tackle Spencer Brown, they selected three players who will be afforded the benefit of getting thrown into the choppy waters of the NFL this season with life preservers around their necks.

The Bills were in an enviable position in this draft because just about every starting spot on their team is already set. Therefore, without a single glaring need, they were able to make their picks with an eye toward the long term rather than the short term.

“We wanted as many impact players this year as we can, but we brought back a lot of our guys who started and played a lot of minutes for us on the way to the AFC Championship Game,” Bills general manager Brandon Beane said Saturday night.

Rousseau and Basham will be part of an edge rusher rotation that includes veterans Jerry Hughes and Mario Addison, plus young players like 2020 second-round pick A.J. Epenesa and 2021 free agent signee Efe Obada. There will be no rushing either of them into a major role.

Beyond those two, Brown and the rest of this class — fifth-round offensive tackle Tommy Doyle, the three sixth-rounders, wide receiver Marquez Stevenson and defensive backs Damar Hamlin and Rachad Wildgoose, and seventh-round offensive guard Jack Anderson — will face an uphill battle getting big playing time in 2021, or possibly even making the team.

Here are my observations on what took place in this draft:

The AFC East got better

The Bills are now the hunted in the division after winning their first title since 1995, and it sure looks like the Patriots, Dolphins and Jets will be well-armed for the pursuit.

After watching the Bills score 501 points last season, the division rivals realized they were going to need to upgrade their own offenses, and between the draft and free agency, they certainly did.

In the first round Thursday the Jets took quarterback Zach Wilson No. 2 overall and guard Alijah Vera-Tucker at No. 14, then added wide receiver Elijah Moore with the second pick of the second round. He joins Corey Davis, Denzel Mims and Jamison Crowder to form a pretty good foursome.

The Dolphins chose wide receiver Jaylen Waddle Thursday to team up with Will Fuller, DeVante Parker and Preston Williams, another nice four-deep receiver group. They also added tight end Hunter Long in the third round who will pair up with talented Mike Gesicki.

And the Patriots’ passing game — whether it’s Cam Newton at quarterback or No. 15 overall pick Mac Jones — will be better with the free agent additions of tight ends Jonnu Smith and Hunter Henry, plus receivers Kendrick Bourne and Nelson Agholor. They also drafted an interesting running back in the fourth round, Rhamondre Stevenson, in the fourth round.

“They all got better,” general manager Brandon Beane said. “They got some young talent. They'll definitely be guys that we’ll have to contend with and stop; guys that had great success. Our division from free agency (and the draft), it's going to be really tough. We knew it would be, but that's what makes it fun and we got to do our job to continue to find players to offset what they've done.”

Not picking a CB early not ideal

Given all the talent that came into the division, it just didn’t make sense to me that Beane didn’t pick a cornerback in the early rounds. Taking Rousseau in the first round is a bit of a boom or bust because he played only one season as a starter in college, but the value seemed right at that point. Particularly if he booms and doesn’t bust.

Basham may turn out to be a fine player, but not taking one of the corners still on the board could prove to be a mistake. Unless the Bills pick up a veteran free agent before the season begins, Levi Wallace is probably starting again, and the depth behind him is questionable at best.

“There were some good corners on the board, but the guys we had high values on, they got taken before we picked each time,” Beane said at the end of Friday night’s session. “It’s a matter of where you are on the board and what the value is.”

The player Beane finally took, Wildgoose, has outside-inside diversity and he also played a lot of zone coverage at Wisconsin which could help him in his jump to the NFL.

If some felt it was strange that Beane went edge rusher back-to-back in the first two rounds, the feeling was the same when he took the offensive tackles, Brown in the third round and Doyle in the fifth.

Again, Beane said that’s how the board fell, but the Bills have Dion Dawkins signed long term, and Daryl Williams will be in Buffalo at least for 2021 and possibly for two years after that.

At best, Brown and Doyle will compete for the swing tackle job as the backup at both positions along with veteran free agent signee Bobby Hart.

Brown and Doyle are both 6-foot-8, and they will have to prove that they can win with technique and athleticism because edge rushers might be able to dip and drive past them on their pass rushes. “We think these guys can bend enough to lower their pad level so they don’t lose leverage,” Beane said.

Imagine you’re the University of Houston standout and you’re coming to a team with Stefon Diggs, Cole Beasley, Emmanuel Sanders, Gabriel Davis and Isaiah McKenzie, five players who are locks to make the 53-man roster.

Then you have receivers like Isaiah Hodgins, Jake Kumerow, Brandon Powell and Duke Williams in the mix, all of whom, with the exception of Hodgins, have played in NFL games.

“I’m excited to be around those type of guys, learn some things from those guys,” Stevenson said. “I know they’re veterans, Cole Beasley, Stefon Diggs, and the other guys also.”

Stevenson is going to have to really impress on special teams as a return man if he hopes to get on the field in 2021. At Houston, he averaged 26.1 yards on 34 kickoff returns in his four seasons there and Beane said that’s an aspect of his game that looks promising.

Stevenson will have a couple guys in his corner as he makes the transition to the NFL. Tre’Davious White has been a mentor of his since he was a little boy as both men grew up in Shreveport, Louisiana.

“I first met him, I was under 10 years old,” Stevenson said. “So, I met him at a young age. Me and his little brother, we were actually best friends growing up so I was always around. I’ve been following his path ever since he went to high school, Green Oaks to LSU and now to Buffalo.”

Stevenson was also a former roommate of Buffalo’s first-round pick in 2019, Ed Oliver.

“We talk all the time also,” he said. “Just being around those guys, they’re telling me how it is up there. Me seeing their progression also, I know what to take it. For us to end up in the same place, I mean, it’s crazy.”

In the sixth round, the Bills picked Hamlin for what we can assume is his special teams’ play. ESPN’s McShay said he loved the pick at that stage of the draft, calling it a home run.

“I can guarantee it right now.... he will make the 53-man roster as a special teams maven,” McShay gushed.

It’s probably not out of the question. Behind starting safeties Jordan Poyer and Micah Hyde, the Bills have only Jaquan Johnson and Josh Thomas now that Dean Marlowe has moved on. Hamlin will have a chance if he’s as good as McShay thinks.

Jack Anderson is a Little Richie

The seventh-round pick not only looks a little like former Bills guard Richie Incognito, not only in the face and the body but with his well-tattooed arms, the two are actually friends and share the same agent.

Anderson said Saturday that he has been in contact with Incognito, tapping into his NFL knowledge, and he said during the draft process that he’s been called “Little Richie.”

It might be a good comp because Anderson was a player who was known to have a bit of a nasty streak, something Incognito made a career out of.

► Maiorana: Patience will be required with Bills 2021 draft class

► Round 1: Bills upgrade their pass rush by choosing Gregory Rousseau in first round

► Round 2: Bills double down on edge rushers as they pick Wake Forest's Carlos Basham

► Round 3: Bills address offensive line in third round by picking tackle Spencer Brown

► Round 6: Bills add to their depth at wide receiver with speedy sixth-round pick Marquez Stevenson

► Round 6: Buffalo Bills address secondary with back-to-back physical defensive backs in sixth round