Dallas still reigns supreme upfront, but one team might be poised to overtake the top spot. 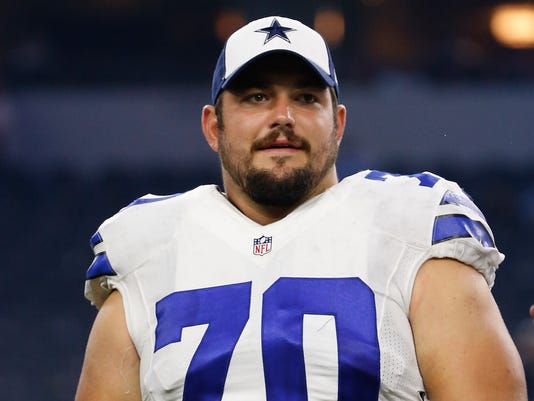 NFL rosters are essentially set until training camps open later this month. In the meantime, USA TODAY Sports has analyzed each team's depth chart and is ranking units throughout the league.

1. Dallas Cowboys: When a greenhorn backfield brings home a rookie of the year award along with a rushing title, the "supporting cast" must be special. QB Dak Prescott and RB Ezekiel Elliott readily admit their 2016 success was enabled by a front regarded as the NFL's best for several seasons. Any unit featuring three all-pros (LT Tyron Smith, RG Zack Martin, C Travis Frederick) is, by definition, elite. But Dallas' hold on the top spot appears tenuous after LG Ron Leary left in free agency, and RT Doug Free retired. La'El Collins struggled inside last year and must prove he can be an NFL tackle, while new LG Chaz Green has played sparingly.

2. Tennessee Titans: RT Jack Conklin mauled his way to all-pro honors as a rookie. He and equally chippy Taylor Lewan could be the league's top tackle tandem for the next decade. Given the way Tennessee ran the ball down opponents' throats in 2016, the continued cohesion with QB Marcus Mariota and maintained continuity, this quintet seems poised to overtake Dallas.

3. Oakland Raiders: Though QB Derek Carr's broken leg scuttled Oakland's hopes in 2016, don't forget his line allowed the fewest sacks (18) in the league. There's a question at right tackle heading into camp, but is there any interior trio better than C Rodney Hudson and Gs Gabe Jackson and Kelechi Osemele?

4. Philadelphia Eagles: Perhaps the telling stat of the Eagles' 2016 season was their 5-1 record when RT Lane Johnson played vs. a 2-8 mark during his suspension. Johnson's presence also had a notable effect on QB Carson Wentz's play. C Jason Kelce must prove he hasn't become the weak link, but Philly looks formidable assuming good health and behavior from its front five.

5. Atlanta Falcons: They were charmed in 2016, C Alex Mack's arrival galvanizing the only line that remained intact all season. That's changed with Chris Chester's retirement, but this remains a top-shelf group that should have little trouble breaking in a right guard.

9. Pittsburgh Steelers: C Maurkice Pouncey and Gs David DeCastro and Ramon Foster are stout up the gut. LT Alejandro Villanueva has come a long way and needs a new contract.

10. Green Bay Packers: They're down some initials after losing T.J. Lang and JC Tretter in free agency. But Aaron Rodgers should still feel quite secure with Ts David Bakhtiari and Bryan Bulaga manning the edges.

11. New England Patriots: Assistant Dante Scarnecchia's emergence from retirement in 2016 was quite welcomed for a group that struggled during his absence. Continuity was also a huge factor after injuries took a toll in 2015. Ts Nate Solder and Marcus Cannon are the foundation.

12. Detroit Lions: The torn shoulder labrum LT Taylor Decker suffered last month is a costly blow, likely to shelve him at least half the season. At least the right side of the line shouldn't be a concern after free agency netted T Ricky Wagner and G T.J. Lang.

13. Chicago Bears: Excellent up the middle, with C Cody Whitehair producing a strong rookie season, while vets Josh Sitton and Kyle Long form one of the game's best guard combos — when healthy. But deficiencies at tackle were a reason Chicago's quarterbacks were under siege in 2016.

14. Kansas City Chiefs: G Laurent Duvernay-Tardif leads a solid, if unspectacular, unit that should probably be a bit better given the resources that have been allocated.

15. Buffalo Bills: It's a testament to the blocking when you produce the top-ranked run game. But there should be pause given LT Cordy Glenn's nagging injuries have carried into the offseason, and Tyrod Taylor suffered a league-high 42 sacks.

16. Miami Dolphins: With three first rounders, it should be strong group. But questions linger as Laremy Tunsil moves from guard to take over for departed LT Branden Albert. And C Mike Pouncey, who hasn't played a full season since 2012, is still trying to shake hip problems.

17. Baltimore Ravens: Marshal Yanda has probably been the game's best guard for a half-decade. LT Ronnie Stanley looks like a keeper. But with RT Ricky Wagner and C Jeremy Zuttah gone, there's work to do.

18. Jacksonville Jaguars: The protection of QB Blake Bortles should be markedly improved given the trade for LT Branden Albert and the second-round pick spent on Cam Robinson, who still needs a position. C Brandon Linder is the rock.

USA TODAY Sports' Lorenzo Reyes says that these five position battles will be the most exciting to watch throughout NFL training camps.

19. Arizona Cardinals: Lot of flux with Ts Jared Veldheer and D.J. Humphries flipping sides — Humphries is apparently now ready to watch Carson Palmer's blind side — and one of the guard jobs open.

20. Indianapolis Colts: LT Anthony Castonzo, G Jack Mewhort and C Ryan Kelly should be the foundation of an effective unit. But they need to stop getting QB Andrew Luck broken.

21. New York Giants: They've endured slings and arrows, and there's no sugarcoating the offense's inability to run. But did you know the Giants' 22 sacks allowed in 2016 were fewest in the NFC? As far as guards go, Justin Pugh's a pretty good one. But the organization is taking a leap of faith that young Ts Ereck Flowers and Bobby Hart, who too often look overmatched, will rise to the occasion.

22. Carolina Panthers: They must stabilize after Cam Newton was pummeled in 2016. New LT Matt Kalil hopes to revitalize his career, and it should help playing alongside brother Ryan, still an all-pro caliber center. Gs Andrew Norwell and Trai Turner can be better.

24. Los Angeles Chargers: QB Philip Rivers has deserved far better for far too long. GM Tom Telesco finally went to work remedying the situation, signing LT Russell Okung then drafting Forrest Lamp and Dan Feeney in the second and third rounds, respectively. But with Matt Slauson apparently switching back to guard from center, the line may have to try several combinations before jelling.

25. Denver Broncos: They couldn't run the ball and failed to adequately protect their young passers. So GM John Elway drafted LT Garett Bolles in the first round after signing G Ron Leary and T Menelik Watson. C Matt Paradis, who graded as Pro Football Focus' top center in 2016, is recovering from surgery to both hips.

26. Tampa Bay Buccaneers: Changes inside as Ali Marpet moves from guard to center after a strong rookie showing. And G J.R. Sweezy is ready to make his Bucs debut after a back injury marred his first year in Tampa. LT Donovan Smith needs to have a breakout.

WATCH: Five players who need to step up

USA TODAY Sports NFL reporter Lorenzo Reyes looks at the five players who need to take their games to another level if their teams are going to have a shot at making the playoffs this season.

27. Minnesota Vikings: Decimated by injuries, it was basically the team's undoing a year ago. Free agency brought a reset with the acquisition of Ts Riley Reiff and Mike Remmers. Rookie Pat Elflein comes highly regarded from Ohio State.

28. Houston Texans: Given the quarterback issues, it's imperative the blocking improve. But LT Duane Brown is unhappy with his contract, C Nick Martin is an unknown quantity — he is Zack Martin's brother, for what it's worth — after losing his rookie season to an ankle injury, and RT Derek Newton won't be back from two ruptured patellar tendons this year.

29. San Francisco 49ers: In LT Joe Staley, C Jeremy Zuttah and G Josh Garnett, a first-round pick in 2016, there's ability here. But like everything with the Niners in 2017, the learning curve is bound to be long and painful.

30. New York Jets: Unrecognizable after being capably anchored for a decade by C Nick Mangold and LT D'Brickashaw Ferguson. G Brian Winters may be the only one of the current bunch with a long shelf life.

31. Cincinnati Bengals: Major recalibration after the loss of LT Andrew Whitworth and RG Kevin Zeitler in free agency. Time for third-year Ts Cedric Ogbuehi, who takes over for Whitworth, and Jake Fisher, never a full-time starter, to deliver.

32. Seattle Seahawks: Simply stated, their cap is spent elsewhere, leaving mostly smoke and mirrors for assistant Tom Cable. That wasn't sufficient in 2016 as the run game tanked, and QB Russell Wilson took a beating. But they're sticking with project LT George Fant, moving Germain Ifedi to right tackle and hoping Luke Joeckel can blossom at guard. 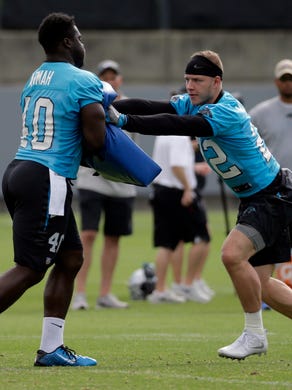 Los Angeles Chargers Melvin Gordon (28) runs a drill during an NFL mini-camp held at the the Chargers facility Thursday, June 15, 2017, in San Diego. The mini-camp was the last Chargers' event to be held in San Diego before the team moves to Los Angeles. Denis Poroy, AP
Fullscreen 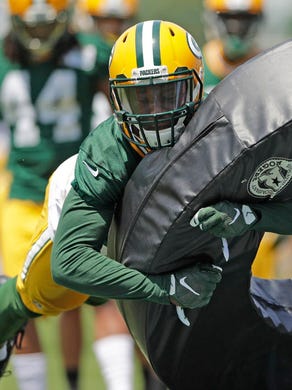 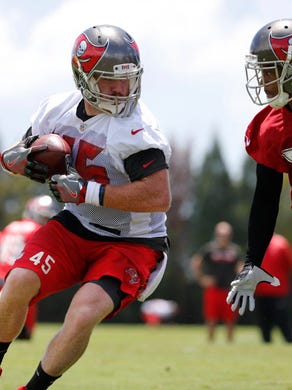 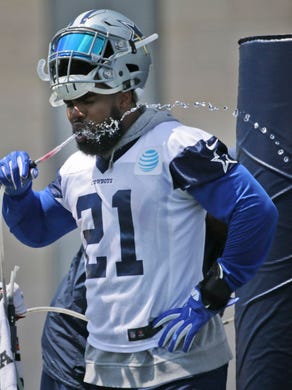 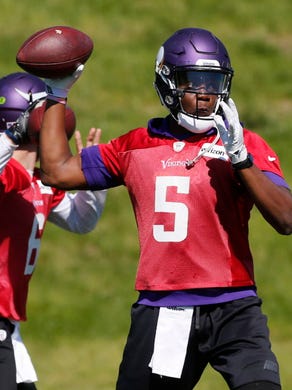 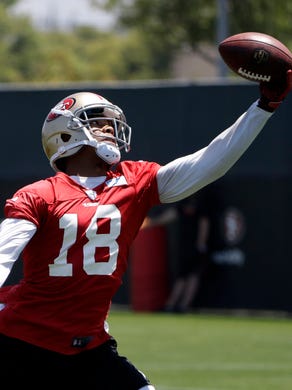