Changing of the guard on defensive line

Changing of the guard on defensive line 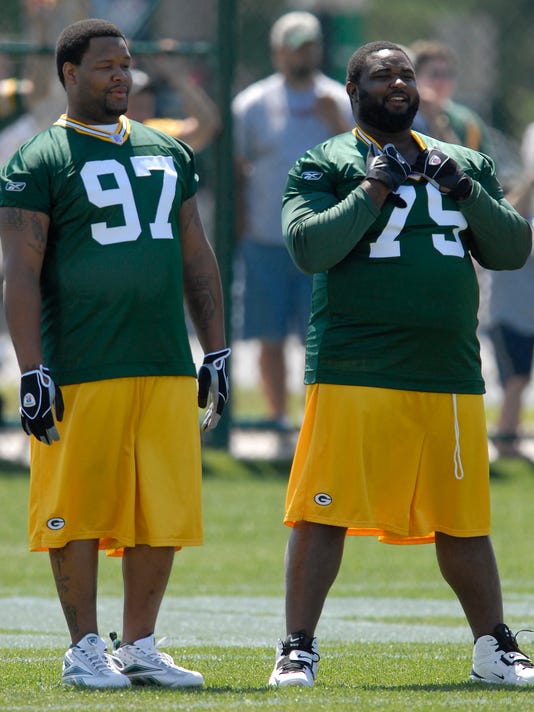 Green Bay Packers defensive tackles Johnny Jolly, left, and Ryan Pickett have combined for 255 regular-season games played, but the two veterans may not return in the 2014 season.(Photo: File/Press-Gazette Media)

For the moment, the old guard is gone. Unless something changes in the next four weeks, life without Ryan Pickett and Johnny Jolly may become a reality for the Green Bay Packers' defensive line.

That would leave the Packers without two-thirds of their starting base defensive line from a year ago and without 18 years of NFL experience. The nine players listed as strictly defensive linemen on the Packers' offseason roster combine for only 17 years of experience.

New leaders must emerge. Third-year pro Mike Daniels has his hand raised, and B.J. Raji re-signed with the Packers in March because he felt something special brewing.

But how do you replace two of the locker room's most respected veterans who combined for 255 regular-season games played? That's life in the NFL.

Packers coach Mike McCarthy hasn't shut the door on bringing back Pickett or Jolly, but for now the room underwent a metamorphosis this offseason. It's younger with an average age of 24.1 years and no one older than 28. A bit lighter, too.

The Packers boasted the third-best run defense through the first seven weeks of last season, but the momentum was lost. Pickett battled a knee injury and Jolly finished the season on injured reserve because of a bulging disk that required surgery in January.

Pickett, who'll turn 35 in October, recently told Sirius XM radio he intends to play a 14th NFL season, preferably in Green Bay. Jolly's agent, Jack Bechta, told Press-Gazette Media on Friday his client has been cleared by his doctors from his C-5/C-6 spinal fusion surgery and is just waiting for a call.

The Packers have one roster spot after releasing running back Johnathan Franklin because of a career-ending neck injury. Regardless of whether Pickett or Jolly return, the Packers' defensive line has to rebuild its run defense, which plummeted to 25th by season's end.

It starts with Raji, who came back on a one-year, $4 million deal. He played in all 16 games, but finished with only 17 tackles and was shut out six times. The Packers were 1-5 in those contests.

"Just getting back to fundamentals," said Raji on the key to rebounding. "It's not about how much, the volume that you do, it's the purpose and attitude which you do it with. And I think we all have it in our minds. ... I think we all understand that to get back to where we want to get to, we have some things that we have to shore up on defense."

The Packers implemented a lot of changes to the defense this offseason, starting with Raji moving back to nose tackle in the 3-4 base. Daniels and 2013 first-round pick Datone Jones might get the first crack at putting a hand in the dirt next to Raji.

Their combined listed weight of 585 pounds is roughly 80 pounds lighter than Pickett and Jolly, but Daniels and Jones reflect the versatility and athleticism the Packers wanted to better utilize.

Daniels played roughly half of the Packers' snaps in 2013, but led the defensive line in sacks (6<AF>1/2<XA>) and pressures (39), according to Pro Football Focus. A tenacious but sawed-off rusher, he's added weight to better position himself for a three-down role.

The Packers had big plans for the 6-foot-4, 285-pound Jones, but an early-camp ankle injury forced him into being mostly an inside rusher in the dime subpackage. He still played in all 16 games and was second on the line behind Daniels with three sacks.

The 2013 first-round pick stayed in Green Bay this winter and worked to put the injury behind him. He's hungry to carve out a larger niche in the defense, and defensive coordinator Dom Capers is scheming for a second-year jump.

"We play a lot of sub, so right now with Pick and Johnny not being here, he's kind of moved up," Trgovac said. "He's kind of moving up that ladder right now and he'll get some chances to play first, second, third down, obviously some Okie. He'll get a shot at all the deal. That will be up to him how he does in training camp."

There are other options. The Packers signed veteran defensive lineman Letroy Guion, who started his last 28 games with Minnesota. Guion, 27, can play anywhere on the line, but he mostly spelled Raji at nose during the offseason.

Third-round pick Khryi Thornton, second-year pro Josh Boyd and 2012 second-round pick Jerel Worthy all hope to get in the rotation, though Worthy didn't participate in offseason practices open to the media. His recovery from a torn anterior cruciate ligament limited him to two games last season.

Watching how Daniels blossomed in his sophomore campaign, Capers is banking on Boyd and Jones to make progress in Year 2.

"We're hoping that Josh can make the same kind of progress that Mike Daniels made," Capers said. "Mike's one of the hardest workers we have. He's got a great defensive temperament. He's strong. He's explosive. We hope he can just pick up where he left off last year and we're anticipating that Josh is going to take a step."

During the offseason program, there was no question Daniels was the loudest voice in the room. A former team captain at the University of Iowa, the 6-foot, 300-pound lineman is calling for a "meaner" disposition on defense.

Jolly, who turned 31 in February, seemed to bring that out of the defense upon his return from a three-year suspension for violating the league policy on substance abuse, but the defense must carry it through an entire season.

Daniels is ready to lead the fight. If Pickett or Jolly return, it means one more established veteran joining the fray. If not, the young linemen are ready to carry the torch.

"I'm very comfortable. If something has to be said, I'm going to say it," Daniels said. "If somebody has a problem with it, then we're grown men. We play a violent game. We get paid to be violent, so why not? If you deck somebody in the locker room because you had a disagreement, there's not going to be any sensitivity training. It's a barbaric sport, so that's how you're going to have to approach it. I'm tired of getting our face punched in by other teams. I'm not used to that."