Ha Ha Clinton-Dix should provide an immediate upgrade for the Packers at safety.(Photo: Evan Siegle/Press-Gazette Media)

In practice all offseason, Micah Hyde took the first snap of Green Bay Packers team drills as the starting safety opposite Morgan Burnett.

That's a sign the team is giving Hyde a serious look at a new position after he played strictly cornerback last year.

But make no mistake, general manager Ted Thompson selected Ha Ha Clinton-Dix with the No. 21 pick overall in this year's draft to immediately shore up what's been a weak link at the back end of the defense since Nick Collins' career-ending neck injury in Week 2 of the 2011 season.

That puts the smart money on Clinton-Dix starting at safety in the NFL's Thursday night regular-season opener Sept. 4 at Seattle. The Packers need more playmaking on the defensive side of the ball after their scoring defense has finished 19th, 11th and tied for 24th in the past three seasons, and their two most notable personnel changes this year are signing outside pass rusher Julius Peppers in free agency and drafting Clinton-Dix in the first round.

LINEBACKERS: Packers need most out of aging Peppers

"Obviously, you pick a guy No. 1 you hope he's going to help you be a better defense," said Dom Capers, the Packers' defensive coordinator. "He's played really the highest level of (college) competiton.

"He's played a defensive system that I'm certainly familiar with, I coordinated (coach) Nick (Saban's) defense in 2006 at Miami. His defensive coordinator (at Alabama) was a secondary coach for me in 2006. The volume of stuff he's had to do and learn because of their system there carries over well for him coming in and learning our system."

The Packers tried to make-do at safety after Collins' injury with marginal-at-best NFL players in Charlie Peprah in 2011, and M.D. Jennings and Jerron McMillian the past two years. Last season, the safeties bottomed out with no interceptions, the first time the Packers have been interception-less at safety for as far back as the position can be easily identified in their media guide, which is 1952.

Assuming Clinton-Dix beats out Hyde, the Packers will have two relatively tall, rangy starters. Their height is identical — Clinton-Dix and Burnett measured 6-13/8 at their respective NFL scouting combines — and they're essentially equal in weight (Clinton-Dix was 208 pounds at the combine, and Burnett remains listed at the same 209 pounds he weighed at his combine).

Burnett tested as the superior athlete. Though he didn't work out at his combine because of a hamstring injury, his campus workout at Georgia Tech was among the best of all safeties in his draft class, combine or Pro Day, and significantly better than Clinton-Dix.

Burnett also was more of a ball hawk in college — both played three years, and Burnett had 14 interceptions to Clinton-Dix's seven.

But the teams that liked Clinton-Dix most in this draft consider him a good if not great athlete whose greatest asset is feel for the game.

"There are some guys I've been around and coached that are 4.6(-second) something or 4.7 but play like 4.5 guys because they take good angles," safeties coach Darren Perry said when asked about Clinton-Dix's speed. "They know what they're doing, they keep themselves out of bad situations, therefore they never get exposed."

Both are more free safeties than strong, though Clinton-Dix probably is the more strong-safety type of the two. Regardless, with their size, they should provide a more interchangeable pair than most teams have, which could help Capers disguise his defensive calls for pass coverage and run support.

The Packers also are hoping an upgrade opposite Burnett will help him become the player they projected when Thompson last summer signed him to a new five-year contract that's paying him $12.5 million in the first two years combined and averages $5.2 million overall. 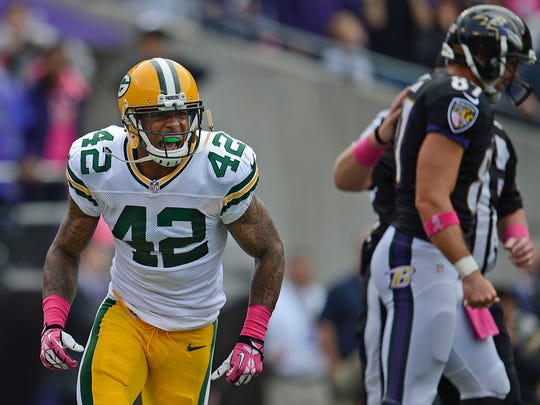 The 25-year-old Burnett had five interceptions in 32 games in '11 and '12 combined before being shut out last season in 13 games — he missed the first three games because of a hamstring injury. He also finished second on the team in tackles (106) and fourth in passes defended (nine).

"I think Morgan's a heck of a football player," Perry said. "Critics may not agree, but Morgan's going to be fine. He's still a young player, ascending."

Though Clinton-Dix is the likely starter, the 2013 fifth-round pick Hyde's chances can't be dismissed after he showed playmaking instincts in coverage, blitzing and tackling as a slot cornerback in nickel and dime personnel last year. His long speed (4.56 seconds in the 40) is only slightly better than Clinton-Dix's and vertical jump (33 inches) was the same, and Hyde also is smaller (5-11¾, 197).

Since early in the offseason before the Packers drafted Clinton-Dix, coach Mike McCarthy has talked of finding ways to get Hyde on the field more, and the move to safety was the best option. Last season Hyde played 419 snaps (39.9 percent of the defensive total) in the nickel and dime roles, and finished eighth on the team in tackles (54) plus had a sack, four passes defended and no interceptions.

But unless Hyde beats out Clinton-Dix, he could have trouble getting extensive playing time. If Casey Hayward is past the hamstring issues that ruined his '13 season, he has to be considered the front-runner for the nickel cornerback job. Which could leave Hyde as the dime cornerback and injury fill-in, though Capers also might find other game plan-specific roles.

"We think (Hyde) is another good football player," Capers said, "and you want to find packages where you can him on the field where he has a chance to make plays."

The Packers also see Hayward's return as an upgrade to their nickel defense, assuming Sam Shields and Tramon Williams are the starting cornerbacks again. Capers' defense is coming off a season in which it had the fewest interceptions (11, which ranked No. 26 in the NFL) and worst opponent passer rating (95.9, No. 25 in the league) in his five seasons as their coordinator.

Hayward, a second-round pick in '12, had a strong rookie year as the nickel cornerback. He didn't tackle well as a blitzer from his slot coverage position, but he led the team in interceptions (six) and passes defended (25). Last season the recurring hamstring injury limited him to three nondescript games.

"He showed he has playmaking ability," Capers said of Hayward as a rookie. "Last year was kind of a lost year for him, so we went from getting six interceptions out of Casey to really not getting much. Yeah, it's encouraging to see him coming back."

Shields and Williams return as the presumptive starters at what's probably the team's deepest position going into training camp, with Hayward, Hyde and Davon House counted among the cornerbacks.

Shields, 26, has made the huge leap from undrafted rookie in '10 to one of the best players in the NFL at his position. He turned down contract extension offers last year, and the Packers ended up paying a premium to keep him off the free-agent market in the spring. Thompson is paying Shields $14 million this year as part of a four-year deal that averages $9.75 million a season, which ties for fifth-highest average salary among all cornerbacks in the league.

"I honestly believe he has two more years of ascending and then he's going to play at that level for another four years," cornerbacks coach Joe Whitt said. "That's six years of just really good football ahead of him and by then he's 32. He might have more, I don't know."

The 31-year-old Williams' level of play dropped for much of the past three seasons after a severe nerve injury in his shoulder in the '11 opener. But he had three interceptions in the second half of last year and appeared to cover and tackle near the level he did in '10, when he was one of the Packers' best defensive players in their Super Bowl run.

"If you're looking for much better play than (the second half of last year), you're not going to get it from anybody in the league," Whitt said. "Now, can we get it for 16 games and onto the playoffs and next year? I'm a firm believer if he's healthy, we're going to get it."