Quarless is the likely starter, but third-round pick Rodgers could push for big role 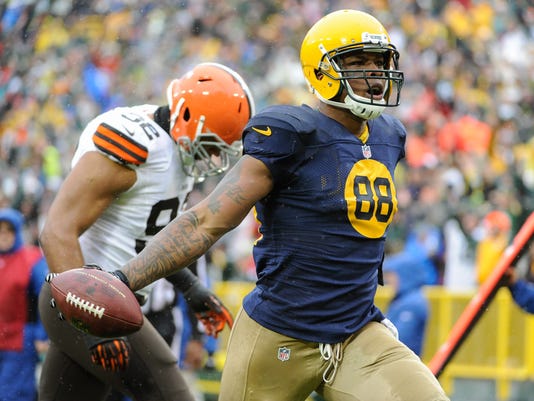 With no Jermichael Finley, the Packers will need someone to step up into a playmaking role at tight end. (Photo: File/USA TODAY Sports )

As often as not, an NFL team's draft class produces a player who wasn't selected for an immediate significant role but ends up playing one anyway.

If you're looking for that kind of possibility in their draft class this year, keep an eye on third-round pick Richard Rodgers, for a couple of reasons.

For one, the Packers have playing time for the taking at tight end, where Jermichael Finley's career with them appears to be over because of a neck injury. Also, in non-padded offseason practices, Rodgers stood out among the rookie class because of his catching skills and an ability to get open despite 4.87-second speed in the 40 that's slowish for his position.

Tight end is among the tougher positions for rookies to be more than bit players. But maybe Rodgers will be the exception. 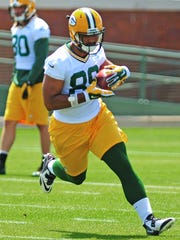 The Packers are trying to develop new playmakers in the passing game after significant personnel turnover the past couple of seasons with the departure of Greg Jennings last year, and James Jones and Finley this year.

The likely loss of Finley, who remains unsigned after his surgeon cleared him to play earlier this summer, leaves a hole in the Packers' passing game despite his shortcomings in catching, consistency and durability. Defenses had to game plan for his size and athleticism, and for the past couple of years he was one of the Packers' three most dangerous receiving weapons. When Randall Cobb went out with a broken leg last October, Finley was talented enough to take over the role as slot receiver until he injured his neck the next game.

Without Finley, Andrew Quarless is the presumptive starter after re-signing this offseason for two years at an average of $1.5 million a season. But the Packers have three young players in Rodgers, Brandon Bostick and Colt Lyerla who are more talented in the passing game and could take on meaningful roles depending on their growth through training camp and the long NFL season.

Andrew Quarless is the likely starter for the Packers at tight end.  (Photo: File/Press-Gazette Media )

Quarless played all 16 games last year after missing 17 months because of multiple blown ligaments in his knee, though he wasn't the same player, especially as a blocker, as he was pre-injury. He hasn't shown the speed to threaten the defense deep but had a career-high 32 catches last season. However, he missed all practices this spring because of an undisclosed injury.

"We need to get better with our fundamentals as far as our footwork in the run game and our pad level," Fontenot said of Quarless. "In the pass game, we need to make a bigger impact. We have to run routes more efficiently. I think the time that Andrew spent off the field rehabbing and getting his knee back to health cost him — not unlike anyone else in that position. If you spend two seasons off the field, it's going to have an effect."

LINEBACKERS: Packers need to get most out of aging Peppers

Rodgers has shown the on-field maturity of the son of a football coach, which he is. His father, Richard Sr., is the Carolina Panthers' special teams coordinator.

"There haven't been too many days where we have not walked off the field and reviewed film and felt very good about the things he is doing," coach Mike McCarthy said of Rodgers at the end of offseason practices.

Bostick, the converted Division II college receiver, has the speed (4.59 seconds at his campus workout in 2012) and receiving skills to make plays all over the field. He missed most of the offseason practices recovering from foot surgery after catching seven passes over a four-game span before sustaining a broken foot last December.

"His body type is definitely a challenge for the opponent with some of the things he's able to do," McCarty said, "particularly his ability to get down the field in coverage. So I think he definitely took a step last year, and I'd like to see him do the same (this year)."

Lyerla is a wild card, and though he's probably more of a developmental player, his high level of ability keeps all possibilities open. The undrafted rookie's physical talents were well documented when the Packers brought him in for their rookie minicamp in May, as were his off-field issues with reliability and drug use that led to his departure from the team at the University of Oregon last season.

"The guy I have watched play football is a kid that's explosive and can be a difference-maker when he gets his hands on the ball," Fontenot said.

Packers receivers Jordy Nelson (87) and Randall Cobb (18) will be the top targets in the passing game.  (Photo: File/Press-Gazette Media )

Receivers Jordy Nelson (40 touchdown catches the past four seasons, which is No. 4 in the NFL over that span) and a healthy Cobb (turns only 24 in August) will be the top two targets in the passing game.

The No. 3 receiver probably will be either third-year pro Jarrett Boykin (49 catches last season) or second-round pick Davante Adams of Fresno State. And second-year pros Chris Harper and Myles White, fifth-round pick Jared Abbrederis, and seventh-rounder Jeff Janis will be battling for one or two spots on the 53-man roster.

"It might not be the big names like we had in the past when we had the whole stable of guys," quarterback Aaron Rodgers said of his receiving corps, "but I think you could definitely see us keeping six guys there in that position, because we are a pretty deep group.

"Obviously, (Boykin) coming along from last year is going to get a lot of looks, and then the young guys as a whole are coming along. I don't like to make a lot of predictions in helmets and shorts, but there's been a lot of plays made (in practice)."