During a passing period early in the Green Bay Packers' padded practice Monday, Richard Rodgers ran a skinny post route through the middle seam of the defense and slipped past backup safety Chris Banjo.

Quarterback Aaron Rodgers threw a strike, and Rodgers made the half-diving catch just behind Bando for another big gain.

Yes, the completion would have been more noteworthy if Richard Rodgers had made it against Morgan Burnett, Micah Hyde or Ha Ha Clinton-Dix.

And no, Rodgers hasn't made a play like that in every practice, offseason and now training camp, since the team drafted him in the third round in May. But he's done it enough to be hard not to notice in what looks like a highly competitive battle for playing time now that Jermichael Finley no longer sits atop the depth chart.

"That's what you get out of a third-round tight end," said second-year pro Jake Stoneburner, a fellow tight end. "I think he's proving other people wrong, because I think some questioned, 'Why Richard in the third round?' But he's a heck of a player. He brings a different dimension to the (tight ends)."

In fact, Rodgers has been the Packers' best tight end through three days of training camp, including camp's first practice in pads Monday morning. 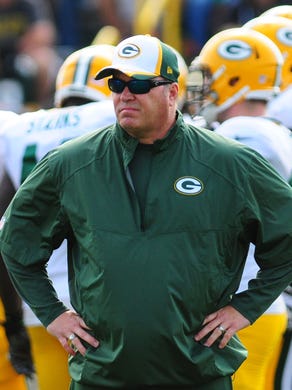 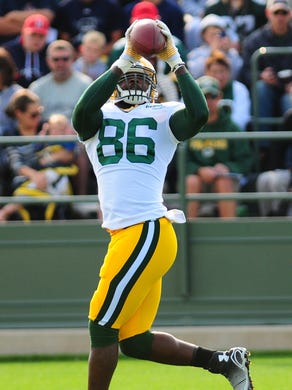 Take that for what it's worth. Performances vacillate in camp, especially with rookies, and it's the play over several weeks, not several days, that matters. But Rodgers also stood out in offseason practices, which makes his good start in camp more credible.

When the Packers open the season at Seattle in 6½ weeks, the coaching staff still might feel more secure starting fifth-year pro Andrew Quarless, who has been working as the No. 1 tight end. But early on in camp, Rodgers is making a strong case to get on the field and has outperformed Quarless, Brandon Bostick and the rest of the tight ends.

"(Rodgers) definitely has really good hands, and he's strong, he kind of bodies you out," Hyde said after practice Monday. "You can tell he's a pretty big, thick guy. When you try to get your hands on him, it's like you're hitting a wall. He's a tough guy to guard."

Though general manager Ted Thompson's selection of Rodgers is looking better by the day, it had the feel of a reach when he selected Rodgers in the third round.

Rodgers has excellent size – he's 6-foot-4 and about 270 pounds, which is heavy even for his position. But his testing at the NFL scouting combine raised questions about his athleticism.

Rodgers' 4.88-second 40-yard dash ranked 14th among the 15 tight ends who ran at the combine, and his 31½-inch vertical jump was 11th among the 17 who jumped. According to Tony Villotti of NationalFootballPost.com, the average 40 time for tight ends at the combine from 1999 to 2013 was 4.79 seconds, or nearly one-tenth of a second faster than Rodgers. The average vertical was a shade under 33 inches, or 1½ inches higher than Rodgers.

"I don't know if I've seen a tight end as thick as he is lower body-wise," cornerback Tramon Williams said. "Upper body he looks like an athlete, and he's thick in his lower body."

Still, the Packers rated Rodgers' hands as the best of the tight ends in his draft class and took him at No. 98 overall after five tight ends went in the top 65.

Whatever Rodgers' athletic limitations, he's shown good strength and length as a receiving target in the middle of the field. And at about 270 pounds – the Packers list him at 257, but indications are he's closer to 270 – Rodgers should have the bulk to be at least a decent blocker.

"I don't think he's as fast as Finley was, and Finley had a little shake to him also," Williams said. "But as far as the size, the body, catching ability, (Rodgers) has it all. The size of his body definitely is going to be a safety blanket for the quarterback. We still have some other tight ends that can get the job done, but he's intriguing."

Quarless, in the meantime, still has most of camp to show himself, though he hasn't done anything to draw notice so far.

Quarless didn't practice during the offseason because of an undisclosed injury, and it's unclear how much that might be affecting his play early in camp. But he hasn't made any receptions of note in team drills through three days, and in the initial half-line run drills of camp Monday he appeared to get pushed around on a couple of snaps. He hasn't been the same blocker since blowing out a knee in December 2011.

Among the other tight ends, the second-year pro Bostick has as much receiving talent as any and says his post-surgical foot is full strength after he missed most of the offseason recovering. He's had two noteworthy catches in team drills through three practices: in non-padded practices Saturday and Sunday, respectively, he had a 20-yarder on a crossing route on a regular team drill and an 8-yarder that converted a third down in a no-huddle period.

Stoneburner flashed his receiving skills Monday with a one-handed catch on a back-shoulder pass down the middle seam with linebacker Sam Barrington in tight coverage. Stoneburner is probably the weakest blocker of the group.

Fourth-year pro Ryan Taylor's chances of making the team probably depend most on his play on special teams.

And among the two undrafted rookies, Justin Perillo is off to a better start than Colt Lyerla.

Perillo, who played in college at Maine, hasn't made any attention-grabbing plays but has caught the few short throws to him in team drills. He appeared to block OK in the half-line run drills Monday.

Lyerla dropped his only two chances in team drills Saturday and has had no other passes thrown his way in his relatively limited snaps in 11-on-11.