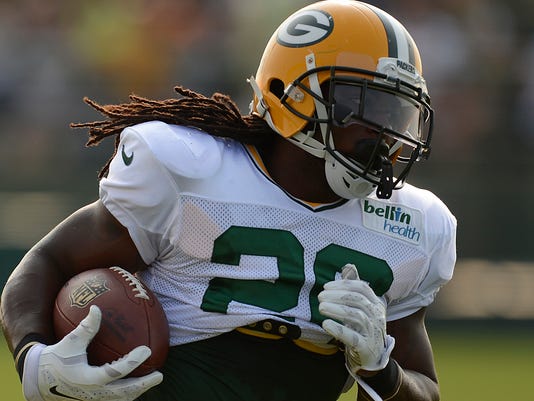 The Green Bay Packers during the Mike McCarthy era never have employed a kickoff return specialist. You'd have to go back to 2003, Antonio Chatman's first season in Green Bay, to find a player who did that job exclusively.

Instead, the Packers have assigned the duties to young skill-position players trying to prove themselves. That approach has had mixed results for the team, but has been a launching pad for young players on the rise.

Now, Micah Hyde is on a projection similar to the ones Tramon Williams, Jordy Nelson, Sam Shields and Randall Cobb experienced. All were the main kick returner until being removed for bigger roles on offense or defense.

For Hyde, a starting safety job could be his to lose, and that appears to be good news for DuJuan Harris, the 5-foot-8, 203-pound running back who missed all of last year with a patellar tendon injury.

Harris, who turns 26 on Sept. 3, has been getting reps with the first-team kick return unit in training camp. While he's shown he possesses the necessary skills, he has little experience in the role.

In four years of college football at Troy, he returned 14 kicks for a 19.9-yard average. In his first season in the NFL, 2011 in Jacksonville, he had 14 returns for a 22-yard average.

RELATED: Abbrederis out for season with torn ACL

"Been doing it since high school," Harris said. "I haven't done much since I've been in the pros. Did it my rookie year.

"When I got here, I didn't do it, it was like the middle of the season. I was just practicing, I didn't get back deep during the game."

"No. 1, he's a good runner," Slocum said. "I think he's got good instincts, he's got good speed. He did do it when he was in Jacksonville a little bit.

"He's catching the ball well, ball security's always a big deal there, but I think he can be a productive guy."

Kick return production has been spotty for the Packers since 2006, McCarthy's first season. They've ranked between 19th and 31st in average return yardage every season except 2011 and 2012, when they ranked 11th and 10th. In those two seasons, Cobb averaged 26.3 yards on 72 returns.

But Cobb, like Nelson, Shields and Williams before him, earned a starting position and became too valuable to risk injury on kickoff returns.

Now, it might be Hyde's turn to focus on the safety position, opening an opportunity for Harris.

"I'll just say this," Slocum said, "he's a good returner, he's got the skill set. We've not made any decisions right now.

"DuJuan, Micah Hyde and several other guys are still part of the equation there. As we go through these preseason games, we'll look at it, evaluate it, look at our final roster and make decisions on exactly who's going to do what."

Harris also is in the mix as the main backup to starting running back Eddie Lacy. He'll battle James Starks for carries, but the trio's different skill sets make for an intriguing 1-2-3 punch.

"I think it's like earth, wind and fire," left tackle David Bakhtiari said. "Eddie's earth, James is fire and DuJuan is wind. I mean he's just so quick, quick back and he's got power, too, for his size, which is pretty remarkable."

Most 5-8 NFL running backs are speed- not power-oriented, but Harris packs a punch at 203 pounds.

"I just remember one play where he just destroyed a linebacker coming across on a crossfire," Bakhtiari said, "which was pretty awesome."

Each of the three has been the primary back at some point in Green Bay. Harris started four games, including two playoff games, after joining the team in December 2012. He was considered the starter by McCarthy entering last season's training camp even though he injured a knee during OTAs and had a large cyst removed from his chest during the offseason, missing minicamp.

He was placed on season-ending injured reserve last August after reinjuring the knee during the third preseason game. But he said his knee is feeling great and that any rust from last season's absence is all but gone.

"A little rust. A little bit. Not too much," he said. "I got most of it out in the OTAs. So, I got my legs underneath me. I feel I'm starting to understand the offense a lot better. I'm moving around better now, I'm not looking a little confused."

His biggest contribution this season, though, likely will come on special teams, where Slocum said Harris could see time on all four punt and kick units.

"Last year was tough but I took a negative and turned it into a positive," Harris said. "I learned a lot from it and I'm coming back a lot hungrier and I'm ready to help out the team.

"You tend to appreciate things a lot more when they're taken away from you. I appreciated it a lot then, but now ... it was tough watching the team struggle and I can't ... I'm not saying I really would have made a big difference, but I didn't like to watch those guys struggle. They're my teammates and I'm just happy to be back with them now."