The Packers set an attendance record for Family Night with 67,336 fans in attendance 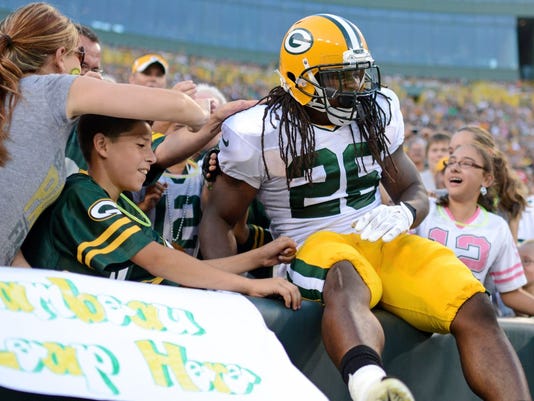 The Packers set an attendance record for Family Night with 67,336 packing into the Lambeau Field for what generally can be seen for free on other days of training camp.

The organization added a few bells and whistles to the usual festivities, including a BMX and laser show, but it was practically the same setup as most training camp practices.

Afterward, team President and CEO Mark Murphy maintained the switch to a practice was a football decision and any decision to move back to a scrimmage would be made under the same umbrella.

Murphy said bringing in another team to scrimmage is "a little more difficult to do with the new collective bargaining agreement."

"I think we'll get feedback from the fans," Murphy said. "I think from a fan's perspective, it was a whole day. People got here at 8 o'clock and there were a lot of activities in the parking lot and the Atrium. So I think it's still a good value for a family event."

The injury that caused tight end Andrew Quarless to miss the entire offseason program was a leg muscle injury.

However, the fifth-year tight end returned for the first day of training camp last week and is now the veteran voice in a group minus Jermichael Finley.

While missing the offseason program didn't help Quarless' case for the starting job, it is a positive sign the injury wasn't related to his surgically repaired knee that caused him to miss the 2012 season.

• A year ago, center JC Tretter stood on crutches while watching the Family Night scrimmage. On Saturday night, he was lining up as the team's starting center.

Tretter got off to a difficult start to training camp with two losses to nose tackle B.J. Raji in one-on-ones last weekend, but said he is finding his rhythm on the line and with Rodgers.

"We have another week going into Tennessee and then we'll just keep growing and moving on from there," Tretter said. "It's going to be a process, but I think it's coming together pretty well."

Center Corey Linsley returned after sitting out one day of practice with a shoulder injury.

• Raji got his ankle rolled up on during a passing drill later in practice and didn't return, though he maintains he could have. He said he expects to be back when the team returns to practice on Monday.

"I could have gone back (in), yeah, but actually my reps that were scheduled," Raji said. "That was going to be my last thing I was doing tonight anyway."

• Receiver Jeff Janis hasn't been cleared to return, but is expecting to return to practice Monday from his recent battle with shingles.

"I'm just going to slowly get back into it and knock the rust off," Janis said. "Hopefully be ready for the first preseason game."

• Rookie receiver Davante Adams has started to heat up. The second-round pick hauled in a sideline pass from Matt Flynn during an early team period over cornerback Antonio Dennard, who had good coverage.

"I'm starting to get a lot of help from my receiver coach (Edgar Bennett) and the vets making sure I understand everything a lot better," Adams said. "I"m just trying to make sure I'm getting everything. The less I have to think about stuff, the faster I'll be able to move on the field."

• The flags were flying again with NFL referees placing a greater emphasis on defensive holding and contact in the passing game. On an estimated 20 reps in the receiver-defensive back coverage drill, the officials threw 10 flags. "At the end of the day, I think they are going to be more strict on some of the things in the preseason and we'll just have to adjust our game to how they call it in the preseason," cornerback Casey Hayward said.