Insider: Thumbs up to Peppers, down to Guion

Julius Peppers came to play in the half-line drill Tuesday.

Insider: Thumbs up to Peppers, down to Guion 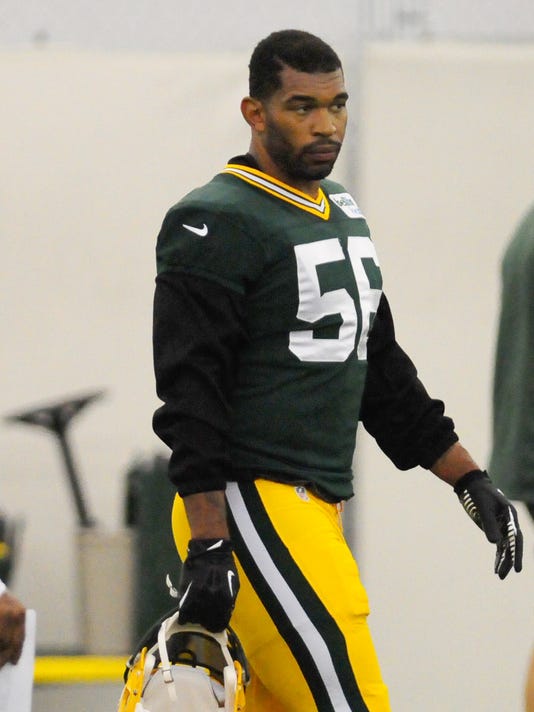 Julius Peppers came to play in the half-line drill Tuesday.

After quickly shedding fullback Ina Liaina, he wrapped up running back Michael Hill in the backfield. On the next play, he beat rookie offensive lineman John Fullington handily and forced the running back into traffic.

Sure, it was scout-team competition, but it's what you expect to see from an eight-time Pro Bowler. The Packers signed him to a three-year deal with a $7.5 million signing bonus in March to help put pressure on the quarterback, but he'll also be counted on in the run game.

Peppers took a bad angle in the Packers' preseason opener against Tennessee on a Shonn Greene 14-yard touchdown run, but bounced back with a tackle for a loss and quarterback hurry during his 22 snaps in Saturday's 21-7 win over St. Louis.

"I like everything he's done," defensive coordinator Dom Capers said. "He's come in here, been very serious, very professional. For a guy to play inside and do the things inside, and now be able to bump out there and do the things we're asking him to do, he's got great flexibility."

The clock is ticking on Letroy Guion.

The Packers got a good look at the 27-year-old defensive lineman during his six seasons in Minnesota, but so far haven't been able to see much of him in their uniform because of a hamstring injury he suffered a week before training camp.

He didn't practice during Tuesday's padded session, making it unlikely he'll play in Friday's third preseason game against Oakland. Guion traveled with the team to St. Louis last week, which led to some suspicion he could be close to a return. However, he remains on the team's non-football injury list.

"He's been hurt, so we're not really talking about injured guys," defensive line coach Mike Trgovac said. "But Letroy is a seven-year vet. Letroy is in my ear. We have plenty of walk-throughs and stuff like that he's been involved in. He's a seven-year vet, so he'll get his game back fast."

The Packers signed Guion to a one-year deal with a $100,000 signing bonus in March to help round out a young defensive line corps. His absence has given the team a chance to look at a number of younger players, but also lacking any linemen older than 25 outside of sixth-year veteran B.J. Raji.

-- The Packers limited cornerback Casey Hayward's workload Tuesday, being mindful of the torn hamstring that ended his 2013 season after only three games.

-- Rookie outside linebacker Jayrone Elliott picked up some extra work on special teams because of Brandon Bostick's lower-leg injury. After recording three sacks in eight plays against the Rams, Elliott was working for the first time with the No. 1 punt team. He also started practice outside with the defensive starters instead of with the scout defense inside the Hutson Center.

-- Rookie offensive lineman Corey Linsley worked at guard for the first time in camp during some team periods. A fifth-round pick in May's draft, Linsley had seen all of his reps as the No. 2 center behind JC Tretter up until this point, but it will be important to diversify his skill set as a likely backup lineman on the 53-man roster. Third-string center Garth Gerhart also worked some guard, as well.

-- Receiver Jarrett Boykin still has the edge in the battle for the No. 3 receiver spot, but he had an ugly drop fly through his hands uncovered in the end zone from Aaron Rodgers in a red-zone period.

-- Defensive lineman Datone Jones had an error in judgment when he swatted a ball out of backup quarterback Scott Tolzien's hands while in pursuit during a team period. Quarterbacks aren't to be touched.