He had the receiver in his sights. No way Ha Ha Clinton-Dix was letting Seattle's Ricardo Lockette past him. Here was the Green Bay Packers' first-round draft pick against an undrafted journeyman, one-on-one. Back turned to the end zone, the rookie safety was ready.

Clinton-Dix had good position. With nothing but green field surrounding them, Lockette had the better odds. Open space is a receiver's best friend.

"You have to keep your feet moving as long as possible," Clinton-Dix explained.

Five yards from Lockette, Clinton-Dix planted both feet and waited. Two yards away, he lunged for Lockette's left leg, the one closest to the sideline. Clinton-Dix tried wrapping both arms around him.

He got nothing but air.

It was the rookie's "Welcome to the NFL" moment. Clinton-Dix slammed to the turf as Lockette raced past for a 33-yard touchdown. The rookie couldn't believe it. Later, he consulted the film, studying each frame until he found what he did wrong.

His regret was a familiar one inside the Packers' locker room this week. Each player saw the same thing when they watched the film. Time after time, defenders had a chance to make a play, only to come up empty.

Inside linebacker Brad Jones had both arms wrapped around Seahawks running back Marshawn Lynch in the backfield, but let him slip away. Fellow inside linebacker A.J. Hawk had a free shot at scrambling quarterback Russell Wilson, but whiffed. Defensive lineman Josh Boyd clung to the hem of Lynch's jersey, but couldn't hold his grasp as Lynch trotted into the end zone.

And that was only one third-quarter drive.

An old, familiar nemesis returned in Seattle. The Packers missed 18 tackles, tied for most in the NFL in Week 1, according to Pro Football Focus. It was an extension of last season, when Green Bay's 116 missed tackles tied for 12th-most. In two of the past three seasons, the Packers have missed more than 100 tackles. 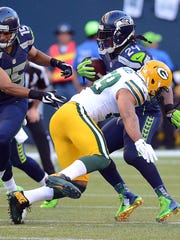 This game coming up won't be much easier. With their "ground and pound" mantra, the Jets could be a tough matchup for a team struggling to tackle. They showcase a similar rushing attack that gave the Packers fits, built on power and a determination to run downhill.

The Packers know they need to be ready. This week, they must wrap up.

No lengthy explanation was needed. When Packers coach Mike McCarthy watched the film last week, he saw the same mistake over and over.

For McCarthy, it was more than the missed tackles. He railed against sloppy fundamentals. Players didn't run through the ball carrier. They left their feet, lunging and often missing.

Disgusted, McCarthy offered his breakdown less than 24 hours after the debacle.

"Our footwork was poor," McCarthy said, clutching the podium in front of him. "When you start leaving your feet to tackle people, it puts you in a compromising position. The biggest part of our tackling issue was the fundamentals of footwork and running through the near hip and the ability to come to balance in stressful situations. We just didn't do a very good job of it."

When a ball carrier slips through a defender's arms, it's easy to blame the would-be tackler. Often, though, the missed tackle originates somewhere else.

Team tackling, as Packers defensive coordinator Dom Capers calls it, demands each player maintain proper leverage. Against temptation, they must stay true to their assignment. The goal is to tackle in confined boxes, to eliminate the open space receivers and running backs use so well.

When it's done correctly, team tackling is a swarm of defenders converging to the ball. All it takes is one player missing an assignment, though, and bad angles lead to sloppy technique.

That's when defenders leave their feet.

"The better your leverage, where you've got people closing from outside-in and inside-out, and the better your gap control is, the more it closes those running seams down," Capers said. "So it's a lot easier to make a tackle in a constricted area than it is when the area is opened up."

Tackling may be the trickiest football skill to practice.

The Packers, like most NFL teams, refrain from live tackling drills. Roster limitations put a premium on keeping players healthy. Most coaches view live tackling as an unnecessary gamble.

The Packers balance the risk and reward. They do half-speed drills, emphasizing proper technique in slow motion to avoid injury. Capers said the drill takes a player through the stages of tackling. The hope is to commit fundamentals to muscle memory.

But half-speed drills don't provide preparation for the speed of a game.

"You can't tackle at practice," veteran Julius Peppers said. "It's only a limited number of guys in here. You've got to get guys ready for the game, so you try as best as you can to wrap 'em up, form 'em up, and thud. But as far as taking to the ground and tackling, you can't get that simulation in practice at all."

Fundamentals are important, the second-year safety said. Tackling is also about intangibles.

"It's all about effort," Hyde said. "It's about being in position, keeping your feet moving, and effort. If you want to get a guy on the ground, you can. I think we have to realize that."

Of course, the other team is trying, too. Lynch broke eight tackles last week, but that's his signature. Last year, his 86 broken tackles were the most Pro Football Focus had tracked in its seven-year history.

Jets running back Chris Ivory doesn't have the nickname, but he matched Lynch on opening weekend. Ivory plays a similar role for the Jets. While Chris Johnson provides the speed and flash, Ivory is the power.

The 6-foot, 220-pounder also broke eight tackles in New York's opener against Oakland, tying Lynch for second-most in the NFL.

The Packers know a familiar challenge is coming. Boyd saw Ivory's 102-yard performance on film. He said Green Bay's defense will be ready.

"I think it's just a mindset, you know," Boyd said. "We weren't in the right mindset when we played Seattle. It's always a mindset to be able to tackle guys. We've just got to bring that mindset next game."