From absolute chaos, a touchdown for the ages

From absolute chaos, a touchdown for the ages 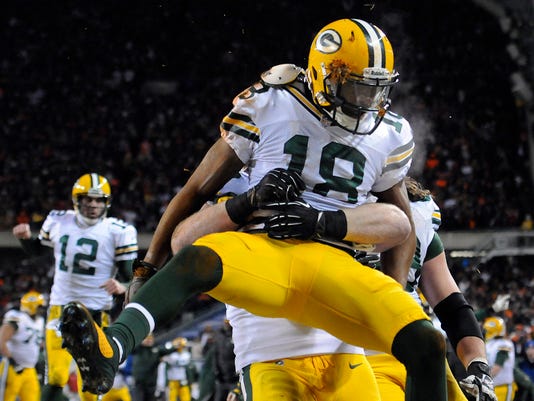 Green Bay receiver Randall Cobb is picked up by teammate John Kuhn after scoring on a 48-yard touchdown reception from Aaron Rodgers against Chicago at Soldier Field.(Photo: File/Press-Gazette Media)

A field goal would've been plenty. Near the end of a turbulent season, the Green Bay Packers weren't about to get greedy.

They were 87 yards from Soldier Field's end zone. Down a point to the Chicago Bears, this was crunch time. If the first 15¾ games of the Packers' 2013 season taught anything, it was to expect a bumpy ride.

Their quarterback was playing his first game in two months. Their record hadn't sat on .500 this late in five years. Surely, game-winning points wouldn't come easy.

As right guard T.J. Lang trotted out to the 13-yard line with the rest of Green Bay's offense, he was thinking baby steps.

"We just kept telling ourselves, 'Hey, all we need is a field goal. Let's just make the plays to get down into field goal range,' " Lang said.

What came next was instant folklore.

Fans from both sides will remember Aaron Rodgers' 48-yard touchdown pass to Randall Cobb on fourth-and-8 with 38 seconds left. Here was another play joining the long list of moments that have built the NFL's greatest rivalry. The touchdown handed Green Bay its third straight NFC North division crown.

Even before Rodgers-to-Cobb, the final Packers drive of the 2013 regular season was worth remembering. Over six minutes and 15 plays, there were enough twists and turns to fill a Stephen King novel. It's worth reliving as the Packers prepare for their return to Soldier Field, where they will play the Bears at noon Sunday.

"It was a great team drive," Rodgers told Press-Gazette Media in a one-on-one interview Thursday. "We accomplished our goal there. We won the division on that drive. We'd gone through a lot of adversity throughout the season, both individually and collectively. There were some tough losing streaks and some tough injuries. When we needed a play, so many guys were able to step up and do their job — and then some.

"They came together to achieve a special feeling." 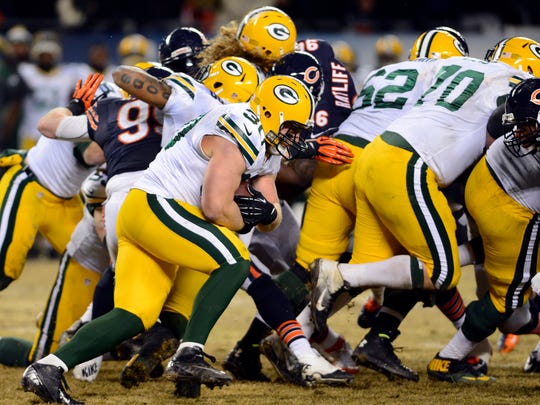 John Kuhn (30) picks up a crucial first down on last December’s final drive against the Chicago Bears. (Photo: File/Press-Gazette Media)

The Packers fullback prevented Julius Peppers from blowing up the final fourth-and-8 with a sack. It was a big play, but maybe not Kuhn's biggest.

Rodgers said another fourth down breathed life into that final drive. From the 22-yard line, Green Bay needed 3 inches. Kuhn got the ball.

"Coach Mike pretty much put everything in that call, because we were backed up in our own end zone," Kuhn said earlier this week. "So, I couldn't let him down. I had to try to get the first down.

"When you're in those situations, you don't think in terms of 'what ifs'. You just try to execute what you've been taught."

Still, the "what-ifs" are intriguing.

On the previous play, it looked like running back Eddie Lacy crossed the first-down marker. At the very least, it was close. McCarthy reached into his pocket, grabbed the red challenge flag.

With players pleading to give them a chance on fourth down, McCarthy stuffed the flag back into his pocket.

"To Mike's credit, he listened to his players," Rodgers said. "We were all calling for them to go for it. And then, absolute chaos breaks out that not many people talk about or know."

For one, McCarthy's decision to go for fourth down came late in the play clock. The Packers broke their huddle with nine seconds left. Depending on perspective, the snap either came with one second left, or with the clock expired. Rodgers used every tick to get the offense in proper alignment.

Out of the huddle, receiver Jarrett Boykin split wide right. Rodgers said he was supposed to go left. The mistake exposed left tackle David Bakhtiari as the far player on that side of the field, an illegal formation that would cost the Packers 5 yards.

Tight end Ryan Taylor motioned from the right slot to the left side with six seconds on the play clock. With two seconds left, Rodgers told Taylor to scoot up to the line of scrimmage, covering Bakhtiari.

"The last second, we were able to get Ryan up on the line of scrimmage and set for a second," Rodgers said. "I turned and handed to John and faked a pitch to Randall. As I turned around, all I could see was (Bears safety) Major Wright waving his hands in front of him, meaning we hadn't gotten the first down. I looked at the spot, and it felt like we might have a chance to get it."

By a yard, the Packers got their first down. Crisis averted.

There were more close calls with disaster up ahead.

Rodgers felt his calf muscles clench tight as soon as he peeled himself from the grass.

He had just picked up a third-and-3 with his legs. In the open field, Rodgers dodged Bears linebacker Lance Briggs. He dove to the 35-yard line, past the first-down marker.

Then, nothing but shooting pain in his legs.

"That was the calf-cramping play," Rodgers said. "Mike was worried if I was injured or not, and I wasn't injured. I was just cramping so bad. Both of them just locked up on me.

"It's hard to do in the cold, but I think I hadn't played a lot of plays in about 2½ months. Thankfully, I was able to get past that and complete a couple balls."

None were more important than four plays later.

On fourth-and-1, receiver Jordy Nelson split wide left to the field side against cornerback Zackary Bowman. One-on-one, Rodgers went to his playmaker.

"It was a low throw and a tough catch, and he comes up with it," Rodgers said.

All the pieces were in place. The final outcome seemed inevitable. On Fox's telecast, broadcaster Joe Buck set the scene. After a disappointing 2012 season, Packers kicker Mason Crosby could get a chance to boot Green Bay into the playoffs.

Everyone expected a field goal.

Near midfield, under the two-minute warning, Rodgers sensed it was time to take his shots. Tight end Andrew Quarless was open down the left sideline on first down, but Rodgers underthrew him. Nelson was open on a post to the right, but he dropped the pass.

The incompletion set up fourth-and-8 and one of the most shocking plays in the rivalry's 188-game history.

Julius Peppers can smile about it now. Standing at his locker Thursday afternoon, he relived Cobb's touchdown from the losing side.

How close was Peppers to sacking Rodgers on fourth-and-8?

Peppers came free off the snap. His right hand slipped off Rodgers' thigh as the quarterback escaped his grasp. If not for Kuhn's block, Peppers said he's preparing to play the Packers this week instead of returning to Chicago to face his former team.

Rodgers rolled left, turned his eyes downfield, but he wasn't looking for Cobb. Nelson was at the marker, running a route designed to pick up the first down. He was Rodgers' first choice, but Wright leveled Nelson before he could throw the football.

"If you look at the last play on the film — on the TV copy — you see Jordy basically get knocked down by Major Wright, who's coming from across the field," Rodgers said. "No call on the illegal contact. He was the first guy I was looking at. As he gets knocked down, then I take my eyes downfield.

"As I move to my left slightly, I see Randall."

All alone at the 20-yard line, Cobb waved his hand to make sure his quarterback didn't miss him. There was nobody within 10 yards.

The throw was more difficult than it looked. Into a steady wind, Rodgers said he compensated right as the football left his hand.

Lang was blocking two players when he looked up and saw the football in midair.

"I didn't really know what was going on," Lang said. "Looked up and saw the ball in the air, saw Randall wide open, and it was just one of those things where you had to kind of double take, like, 'Holy crap, that just happened.' To see a guy wide open, you kind of watch the ball, it all goes in slow motion. The first thing going through your mind is, 'Catch the damn ball, Randall!' "

Lang said the adversity Green Bay faced in those six minutes was emblematic of the season. The Packers picked up three first downs, all on third- or fourth-down conversions. They overcame dropped passes, missed assignments, a bad snap. Their night ended with a celebration in the visitors' locker room.

Just a field goal? The Packers got a lot more than that.

"In your career, you only get a certain amount of plays that are going to stick with you like that," Lang said. "When somebody asks, 'Which play sticks out to you?' That's obviously one of those plays. You reminisce on that. I think it's good to go back and look and kind of re-feel those feelings again of just how big of a play it was.

"So yeah, it's just one of those plays I don't think anybody will ever forget."