Time and downs are currency for an NFL comeback, but it doesn't hurt to have Rodgers as your quarterback. 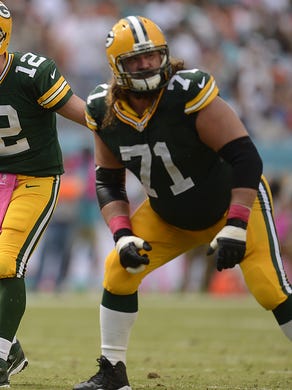 Green Bay Packers break from the huddle in the first quarter during Sunday's game against the Miami Dolphins at Sun Life Stadium. Evan Siegle/Press-Gazette Media
Fullscreen

Green Bay Packers receiver Randall Cobb (18) runs with the ball after making a catch in the first quarter during Sunday's game against the Miami Dolphins at Sun Life Stadium. Evan Siegle/Press-Gazette Media
Fullscreen

Green Bay Packers guard T.J. Lang (70) dives for the football after a Packers fumble in the fourth quarter during Sunday's game against the Miami Dolphins at Sun Life Stadium. Evan Siegle/Press-Gazette Media
Fullscreen

Green Bay Packers receiver Davante Adams (17) runs with the ball after making a catch against the Miami Dolphins in the third quarter during Sunday's game at Sun Life Stadium. Evan Siegle/Press-Gazette Media
Fullscreen

At right, Heidi D'Agostino, from Naples but originally from Hortonville, Wis., Angie Plaisance, middle, and Anne D'Agostino, both from Naples, soak up the sun while tailgating before the Green Bay Packers at Sun Life Stadium. Evan Siegle/Press-Gazette Media
Fullscreen

Whitney Riley, from Rockton, Ill., has some fun with the Miami Dolphins mascot before the Green Bay Packers at Sun Life Stadium. Evan Siegle/Press-Gazette Media
Fullscreen

Anthony "The Pack Daddy" Leonard, from Texas, has some fun with tailgaters before the Green Bay Packers at Sun Life Stadium. Evan Siegle/Press-Gazette Media
Fullscreen

Tom Clements doesn't know the exact origins of his 'Time and downs' catchphrase.

Off the top of his head, the Green Bay Packers' offensive coordinator believes he might have pulled it from long-time NFL assistant coach Jimmy Raye during their time together with the Kansas City Chiefs 14 years ago.

Regardless, it's a motto Clements likes to pass down to his players as a reminder you always have a chance to win in the NFL so long as there's time on the clock and downs left to utilize.

From Day One, it's a message Aaron Rodgers heard loud and clear.

"We say that when we install 2-minute in the off-season, when we install it first in training camp," Clements said. "Periodically when we practice it, it happens that we might have 3 seconds on the clock and we end up getting a touchdown. We always say if you have time and downs you have a chance."

"You have a better chance," Clements deadpanned.

The Aaron Rodgers the Packers' locker room universally respects and admires was in full effect when he engineered an 11-play, 60-yard touchdown drive in the final two minutes of Sunday's 27-24 comeback victory over the Miami Dolphins at Sun Life Stadium.

It's the kind of brilliance his teammates and coaches have come to expect from the leader who told all the outside voices to R-E-L-A-X after the offense's lackluster performance in a 19-7 loss to Detroit last month.

Those five letters bear responsibility. By uttering them, Rodgers placed the weight of the Packers' offense on his shoulders.

The Packers have gone on to win their next three contests, though Sunday's game required Rodgers to pull more than one rabbit out of his hat during the game-winning drive. His 4-yard touchdown pass to tight end Andrew Quarless with 3 seconds reflected his mastery of the back-shoulder throw.

A lesser quarterback might have been swallowed up in the moment and forced an impromptu turnover to send the Packers to 3-3 on the season. Not Rodgers, who has now thrown 172 passes without an interception.

No, this was his domain. Whether it was staying in the pocket, scrambling for extra yards or using his feet to extend a play, Rodgers did it all playing under a scorching Miami sun. Every move the Dolphins made, he had the perfect counter.

It was Madden Football with Rodgers playing the role of that pesky neighborhood kid who made you smash your controller against the wall in disgust play after play.

"I'd probably say he's the most dangerous in the NFL on the extended plays," Quarless said. "We know that's the type of quarterback he is. He's going to make the plays, he's going to extend the plays, and we've got to be there to support him."

Many of the plays Rodgers created against the Dolphins really had no business being successful. His 18-yard dart on fourth-and-10 to Nelson on the final drive came as Olivier Vernon drove him into the turf.

In the third quarter, he shook unblocked Dolphins linebacker Koa Misi on a rollout, giving Randall Cobb enough time to find an opening for a 5-yard touchdown pass delivered through a sea of white jerseys.

It was the seventh time Rodgers has connected with Cobb on a touchdown in six games.

"That's hard," Clements said of the play. "Because he really couldn't square his shoulders. He was under duress. He had to really accelerate to get around a contain rusher. He had to throw it slightly back across his body without squaring his shoulders. There aren't a lot of guys who can do that."

The fear with Rodgers always has been his penchant for holding onto the football. It's no secret he'd just as soon hold onto the football than relinquishing the ball to another team. It's what has allowed him to toss 203 touchdowns against 53 interceptions.

The downside is the sacks and collisions. Rodgers suffered two concussions during the Packers' Super Bowl season in 2010. As he's gotten older, he's learned the value in giving himself up rather than trying to channel his inner-Eddie Lacy.

Rodgers hasn't taken matters into his own hands as often this season. His 2.3 carries per game is the lowest of his career, but he busted out a season-high seven scrambles for 34 yards against the Dolphins.

With the middle of the field open in the first quarter, he audibled into one 8-yard keeper for first down. Otherwise, Rodgers mostly slid or ran out of bounds with the exception of absorbing Reshad Jones' form tackle late in the fourth.

"That's where you can't have your cake and eat it too," McCarthy said. "He's the best in the business at it, has been a long time. There is risk involved, but I think he's smarter, more mature with some of his decisions. When I see him slide, I'm happy about that. It's a good thing. Because there was a day when it didn't slide."

Sunday wasn't all sunshine and rainbows. The Packers' offense hit the skids after Rodgers went 5-for-5 for 69 yards and a touchdown pass to Jordy Nelson on the team's first scoring drive.

Unable to take advantage of two first-half turnovers, the door stayed open for a Dolphins' second-half rally. After Green Bay's offense went three-and-out for the first time in the fourth quarter, quarterback Ryan Tannehill steered Miami to its first lead of the game with 9:13 left.

Rodgers was at his best when the game was on the line, though. As seconds ticked down, he had the fortitude to call the quick screen to rookie Davante Adams off a fake spike. Of course, it worked. His next pass to Quarless won the game and built upon his legend.

"He's a great player," Clements said. "And great players make great plays, especially in difficult circumstances. We're kind of spoiled because he does so many great things consistently. So we just hope he keeps on doing them."

There have been a lot of memorable moments in Rodgers' seven seasons as the team's starting quarterback. His near-perfect performance in Atlanta during the 2010 NFC playoffs. His three touchdowns in Super Bowl XLV. Last year's playoff-clinching touchdown pass to Cobb.

The Packers are used to it. Sure, it was just one regular-season win, but Sunday underscored the level Rodgers is playing at and just how few are in his atmosphere.

Time and downs are currency for an NFL comeback as Clements says, but it doesn't hurt to have Rodgers as your quarterback, either.

"That's an everyday thing for him," center Corey Linsley said. "It doesn't surprise me anymore. The first time I was shocked, but that's like the 100th time he's done that. You appreciate it every time he does it, but it's just another day in the life for him, I guess."