Packers, Saints gear up for shootout

Packers, Saints gear up for shootout

Packers receiver Randall Cobb returns a kick 108 yards for a touchdown against the Saints during the 2011 season opener.(Photo: File/Gannett Wisconsin Media)

Two offenses have lit the NFL on fire for the better part of the past decade with a similar script.

Yes, it would appear all the elements are in place for another high-scoring affair when Aaron Rodgers and the Green Bay Packers travel to face Drew Brees and the New Orleans Saints on Sunday.

At least that's been the trend since Ted Thompson hired Mike McCarthy on Jan. 12, 2006, and Mickey Loomis tabbed Sean Payton as his coach a week later.

The teams have met four times since with each claiming two victories. Since Rodgers took over in 2008, the Packers' and Saints' average combined score of 70.3 points per game is the second-most between opposing teams that have met at least three times since 2008 behind the New York Giants and Saints (75.7), according to Elias Sports Bureau.

It's what you'd expect from two of the league's most prolific offenses. The Saints have finished every season since 2006 inside the top 10 in total offense with the Packers outside of that just once (13th in 2012).

This year has been a work in progress for both teams. The Saints rank second in total offense (437.0 yards per game), but are tied for 29th in turnover margin (minus-8).

Meanwhile, the Packers are fourth in points scored (28.4 per contest), but 25th in total yards (325.4). Despite the early ups and downs, both teams are expecting fireworks inside the Superdome. 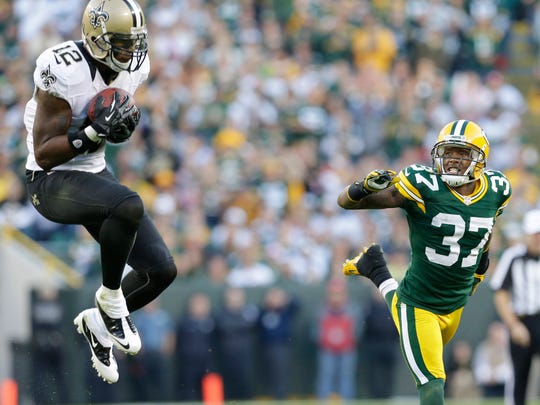 "I think you go in every game shooting all your bullets," McCarthy said. "I mean, hopefully you're hitting them and they're not hitting you. So, we'll see how it goes. I think you definitely, as you put your plan together, the play style of the football team, obviously where you're playing is a factor here. It's on turf, I mean this is going to be a fast environment. So it's an important game for both teams."

The key to the potent offensive attack has been the premier play of Rodgers and Brees, who each have piloted a Super Bowl team and combine for 11 Pro Bowls.

Rodgers' first and only trip to the Superdome is one he'd like to forget, a 51-29 shellacking in his 11th NFL start in 2008. It was one of only three times in his NFL career he threw three interceptions in a game.

After getting run out of Louisiana, Rodgers battled back with a 312-yard effort with three touchdowns in a 42-34 win over the Saints in 2011, when Brees threw for 419 yards and three scores of his own.

Brees was even better in the teams' last meeting in 2012, but his 446 passing yards and three scores weren't enough to topple Rodgers' 319 yards and four touchdowns in a 28-27 triumph.

Brees has been hit-and-miss for the 2-4 Saints this season. He's thrown seven interceptions in six games. Three of the team's four losses have come by 3 points or less.

That's why every player who spoke in the Packers' locker room Wednesday said they're preparing for a team that's better than its record indicates, especially when one of the NFL's few elite quarterbacks is leading the charge. 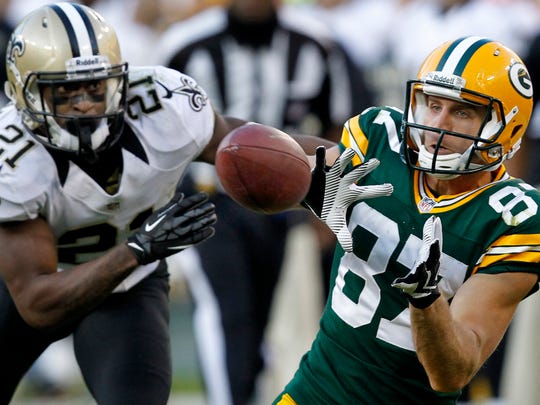 "The thing about Drew is you know you're going to be in for a high-scoring game," outside linebacker Clay Matthews said. "With the offense in which they possess, how he's able to get rid of the ball so quickly; kind of make defenses pay. We've really got to take advantage of that and that being really just trying to get after him and making our plays when we need to."

Rodgers says he doesn't go into such a game with the mindset of preparing for a shootout. His focus is on efficiency on first and second down. Succeed there, and you're better positioned for manageable third-down conversions and explosive plays.

It's worked well to this point. Rodgers has only one interception on 211 pass attempts, which puts him on pace for two this season. He had six when he was honored as the NFL's MVP in 2011.

It's helped propel the Packers to the league lead in turnover differential (plus-10). When it comes to shootouts, he's also 17-3 since 2010 when throwing for more than 300 yards.

"Aaron is one of the best. He's one of the greatest," Brees said in a conference call with Green Bay media Wednesday. "The year that he's having has been, you just kind of shake your head. He's so impressive. Anytime there's a guy like that on the other side of the ball, you know you have to be at your best and it seems like all the little things in a game like this, all the little details are magnified. It's not one of these, 'Hey, we've got to be perfect.' Nobody is perfect. But you have to be pretty darn close."

Packers cornerback Davon House doesn't see many differences between the quarterback he faces in practice and the one he's game-planning for Sunday. Rodgers might have the stronger arm, but both can general an offense with little outside assistance.

Brees believes that's one of the lasting benefits of playing in a scheme for so long. Even when Payton was suspended for the entire 2012 season because of the Bountygate scandal, Brees still was running his offense.

There are a lot of parallels in McCarthy and Payton's scheme, too. Traditionally, both have a pass-first mentality and prefer running in a zebra personnel package of three receivers, one tight end and one running back.

Brees doesn't have Rodgers' perimeter weapons or a reigning NFL offensive rookie of the year in his backfield, but All-Pro tight end Jimmy Graham is a good equalizer.

"Really feeling like we evolve each year, with our personnel and as this game evolves," Brees said. "We always try to stay ahead of the curve. Aaron can say the same thing about being there with McCarthy and being in that system for a long time. There's just a comfort level there and a lot of confidence going into every game, just feeling like we've been through so much together, so many different situations. You never, or rarely, encounter something that you haven't seen before or done before."

Payton and McCarthy are the last remaining members of the head-coaching class of 2006. With a combined record of 162-90-1, their teams rank first (plus-568) and second (plus-560), respectively, when it comes to point differential over that stretch.

Many will try to draw the same connection between Rodgers with Brees, but that's not how the Packers' quarterback views things.

The only certainty is two explosive offenses will meet and in all likelihood points will be scored.

"You're not playing against him," Rodgers said of Brees. "This is the Saints against the Packers."