Insider: Thumbs up to Jordy Nelson

Insider: Thumbs up to Jordy Nelson

The victory allowed Green Bay (6-3) to remain one game behind NFC North-leading Detroit (7-2), which rallied in the final minute Sunday to defeat Miami 20-16. In their final seven games this season, the Lions' opponents are 32-31 overall and the Packers' opponents are 33-29. Green Bay hosts Detroit in the final weekend of the regular season, likely for the division title.

It could be argued that this game turned when Chicago decided to start Jay Cutler at quarterback. After all, Cutler entered the game 1-9 as a Bears starter vs. Green Bay. He had thrown 20 interceptions to 12 touchdowns.

When nickel back Micah Hyde jumped a pass route by tight end Martellus Bennett and picked off Cutler only 8 minutes, 58 seconds into the game, it looked like the same old script playing out. Four plays later, Aaron Rodgers connected with Andrew Quarless for a 4-yard touchdown, a 14-0 lead and, as it turned out, the ballgame.

Green Bay Packers running back Eddie Lacy, #27, is tackled by Chicago Bears strong safety Ryan Mundy during a run in the game against the Chicago Bears. Joshua Bessex/Post-Crescent Media
Fullscreen 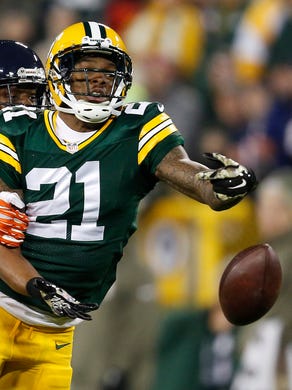 Green Bay Packers quarterback Aaron Rodgers acknowledges the crowd as he runs off the field after the Packers defeated the Chicago Bears. Evan Siegle/Press-Gazette Media
Fullscreen 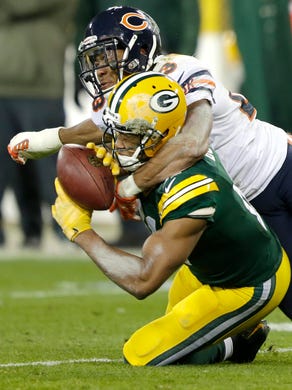 Green Bay Packers linebacker Julius Peppers feels their domination of the Chicago Bears was a more accurate reflection of what the defense can be. Evan Siegle/Press-Gazette Media
Fullscreen

Inspector Tom Behm with the Wisconsin State Patrol salutes as the national anthem is performed along with fireworks, flags and special red, white and blue cards held by fans. Kyle Bursaw/Press-Gazette Media/@kbursaw
Fullscreen

A fan stands up and cheers in during the first half. Kyle Bursaw/Press-Gazette Media/@kbursaw
Fullscreen

One of the Packers cheerleaders performs during a timeout. Kyle Bursaw/Press-Gazette Media/@kbursaw
Fullscreen 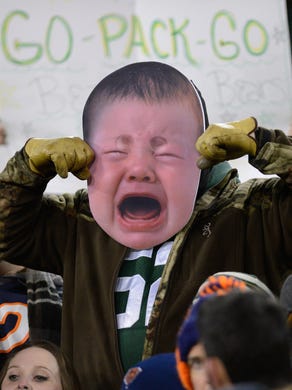 A fan displays his crying baby face after the Packers score in the first quarter. Kyle Bursaw/Press-Gazette Media/@kbursaw
Fullscreen

Green Bay Packers quarterback Aaron Rodgers (12) looks for a receiver to flick a pass to as he is brought down by Chicago Bears defensive tackle Jeremiah Ratliff (90). Kyle Bursaw/Press-Gazette Media/@kbursaw
Fullscreen 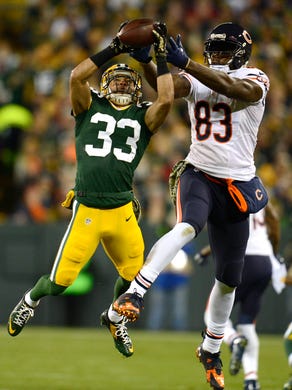 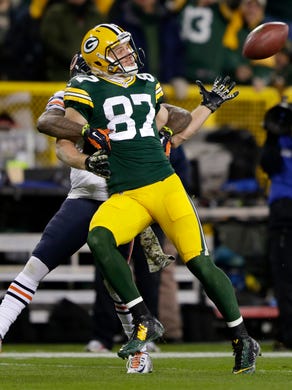 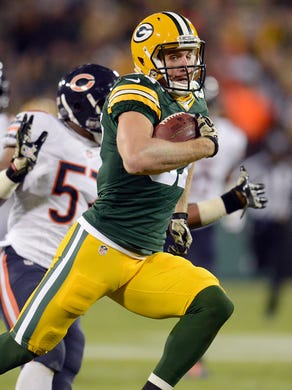 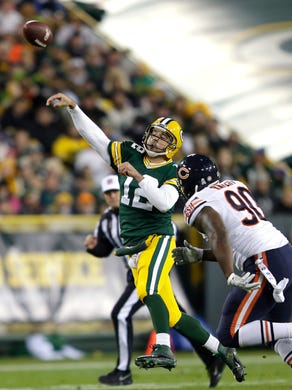 Green Bay Packers receiver Jordy Nelson (87) makes a catch over the middle which he took in for a touchdown against the Chicago Bears. Wm.Glasheen/P-C Media
Fullscreen 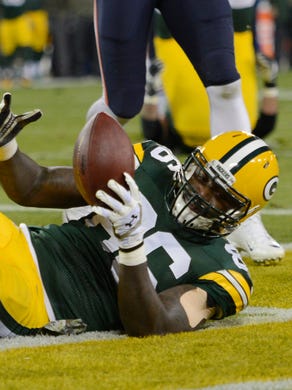 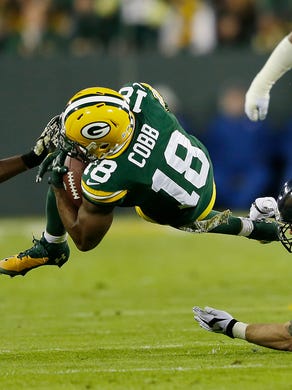 Green Bay Packers receiver Randall Cobb (18) gets hit after making a catch in the first quarter against the Chicago Bears. Wm.Glasheen/P-C Media
Fullscreen

Fans watch from the stands before Sunday night's game between the Green Bay Packers and the Chicago Bears at Lambeau Field. Evan Siegle/Press-Gazette Media
Fullscreen

Fans look on from the stands before the Packers-Bears game at Lambeau Field. Wm.Glasheen/P-C Media
Fullscreen 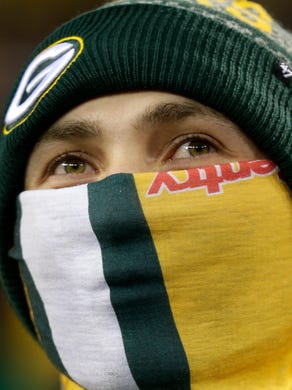 Fans bundled up to fight the cold during the Packers-Bears game at Lambeau Field. Wm.Glasheen/P-C Media
Fullscreen

Jordy Nelson just keeps getting wide open deep down the right sideline. It happened again on the first play of the second quarter when Chicago cornerback Tim Jennings released Nelson to a safety who wasn't there to help.

The result was a 73-yard touchdown, his fourth TD reception of 50 or more yards this season. Then, on Green Bay's next possession, Nelson caught a 40-yard touchdown pass and the rout was on.

Nelson moved up the ranks in the Packers record book, passing Billy Howton for eighth place in touchdown receptions with 44 and Carroll Dale for 10th place in receiving yards with 5,479.

When Aaron Rodgers came out to play in the second half, with a 42-0 lead and fresh off a hamstring tweak, is was a curious decision.

When he returned for the second series of the second half, it was just plain arrogant. What was there to be gained? Records, certainly. But exposing him to a humiliated Bears defense and risking injury was just not smart.

The game was essentially over by halftime. It should have been Matt Flynn's turn to mop up. Flynn finally took over with 7:44 left in the third quarter.

-- The Bears had given up a franchise-record 38 first-half points to the New England Patriots in their most-recent game. On Sunday, the Packers broke that record with 42 first-half points. It should be noted that the Bears franchise dates to 1919.

-- Green Bay has beaten Chicago nine times in the past 10 meetings, but the Bears still hold a 93-91-6 edge in the series, including two playoff games. The last time Green Bay led the overall series: 1932, when it was 11-10-5 against Chicago.

-- Aaron Rodgers is 21-3 against the Bears as the starting quarterback. He's also won nine in a row against Chicago in games he's thrown at least five passes … meaning, don't count the first game last season when he was knocked out early with a broken collarbone.

RAVE: The Packers' defense against the run, which entered Sunday night's game as the worst in the NFL, came to play against the Bears. Granted, this one was out of reach early and Chicago was forced to throw to try to catch up. But before that, Green Bay effectively shut down running back Matt Forte, holding him to six yards on four first-quarter carries. Forte finished with 54 yards on 17 carries (a 3.2-yard average) after torching the Packers for 122 yards in the teams' first matchup this season. In that game, the Bears totaled 235 rushing yards. Then, two weeks ago, Green Bay allowed New Orleans to roll up 193 rushing yards, 172 from Mark Ingram. Sunday marked the first time in 11 games (12 counting the playoffs) that the Packers didn't allow more than 100 yards rushing. The return from injury of safety Morgan Burnett cannot be understated in Green Bay's success.

RANT: Did the Packers get a bit lackadaisical after Casey Hayward returned a Jay Cutler interception 82 yards for a touchdown and a 55-7 lead? It sure looked like it on the ensuing kickoff, when Chicago's Chris Williams raced 101 yards through Green Bay's kick coverage unit for a touchdown. Even the usually reliable Mason Crosby couldn't get a hand on Williams.