The structure of the Green Bay Packers' nickel defense hasn't changed on the surface, but it has evolved

The structure of the Green Bay Packers' nickel defense hasn't changed on the surface.

The foundation still consists of five defensive backs, four linebackers and two defensive linemen, but a closer look reveals an evolution that's taken place through the course of this season.

It took some trial-and-error to identify packages to meet the Packers' offseason mantra of "More personnel. Less scheme," but coordinator Dom Capers seem to have latched onto something in the first two games after the bye week.

It started with Clay Matthews' insertion next to A.J. Hawk at inside linebacker in last week's 55-14 win over Chicago. His sideline-to-sideline athleticism has added spontaneity to the defense and allows Matthews to be at the focal point of the entire defense.

Insider: Thumbs up to Matthews, down to special teams

Philadelphia offensive coordinator Pat Shurmur told reporters in the week leading up to Sunday's 53-20 blowout that he believed Capers hadn't shown everything with Matthews. He was right.

The latest development saw Matthews line up as the fifth rusher on the line next to an outside linebacker on 16 occasions, which basically allowed the Packers' defense to remain in its nickel subpackage throughout the meaningful portions of Sunday's game.

Or whatever you want to call it.

"He can still do all the things that we've done with him: moving him from outside to inside, and in that package he starts inside and moves outside," Capers said. "It does give you some versatility and I think flexibility. They have to do decide how they're going to define him. Are they going to define him as a Mike or define him as a defensive end? You try to tie that into your packages that maybe creates a little more for them, put more on their plate."

The Packers barely have used their base defenses since the bye week, preferring to stick with the extra defensive back and banking on the unpredictability of Matthews' placement that has generated a much-needed boost for the defense.

It's not just Matthews, either. Since a 44-23 wake-up call in New Orleans, the line has been more disruptive, the outside pass rush has been more consistent and the platoon of Micah Hyde and Casey Hayward has increased the production from the slot cornerback spot in the nickel defense.

Green Bay Packers linebacker Julius Peppers is lost in a sea of fans while celebrating his interception for a touchdown in the third quarter against the Philadelphia Eagles at Lambeau Field. Evan Siegle/Press-Gazette Media
Fullscreen 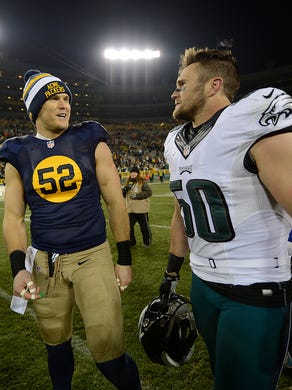 Philadelphia Eagles quarterback Mark Sanchez (3) tries to pick up the football after the Eagles fumbled the ball in the fourth quarter against the Green Bay Packers at Lambeau Field. Evan Siegle/Press-Gazette Media
Fullscreen

Green Bay Packers cornerback Tramon Williams (38) is congratulated by teammate Ha Ha Clinton-Dix (21) after Williams made an interception in the fourth quarter against the Philadelphia Eagles at Lambeau Field. Evan Siegle/Press-Gazette Media
Fullscreen

Green Bay Packers cornerback Tramon Williams (38) is congratulated by his teammates after Williams made an interception in the fourth quarter against the Philadelphia Eagles at Lambeau Field. Evan Siegle/Press-Gazette Media
Fullscreen

Green Bay Packers cornerback Tramon Williams (38) is congratulated by teammate Casey Hayward (29) after Williams made an interception in the fourth quarter against the Philadelphia Eagles at Lambeau Field. Evan Siegle/Press-Gazette Media
Fullscreen

Green Bay Packers linebacker Julius Peppers (56) runs with the ball after making an interception in the third quarter against the Philadelphia Eagles at Lambeau Field. Peppers ran back the interception for a touchdown. Evan Siegle/Press-Gazette Media
Fullscreen

Green Bay Packers quarterback Aaron Rodgers (12) signals for a first down after making a run in the third quarter against the Philadelphia Eagles at Lambeau Field. Evan Siegle/Press-Gazette Media
Fullscreen

Green Bay Packers quarterback Aaron Rodgers acknowledges the crowd as he runs off the field after a 53-20 win over the Philadelphia Eagles at Lambeau Field. Evan Siegle/Press-Gazette Media
Fullscreen

Green Bay Packers' Micah Hyde (33) is all smiles after getting doused with beer while taking part in a Lambeau Leap after returning a punt for a 75-yard touchdown against the Philadelphia Eagles at Lambeau Field. Evan Siegle/Press-Gazette Media
Fullscreen

Chris Schroeder, from Delaware, shows off his sign as he stands near the 50-foot-tall chrome replica of the Vince Lombardi Trophy near the American Family Insurance Gate at Lambeau Field. Evan Siegle/Press-Gazette Media
Fullscreen

At right, Alex Rickert, from Elmhurst, Ill., and Sam Knoblauch, from Des Moines, Iowa, are all smiles as they play a game of bean bag toss while tailgating at Lambeau Field. Evan Siegle/Press-Gazette Media
Fullscreen

A tailgater reacts after being hit by a snowball wile playing catch in the parking lot of Lambeau Field. Joshua Bessex/P-C Media
Fullscreen

Both players have grabbed interceptions in the Packers' last two wins with Hayward also returning a fumble for a touchdown in Sunday's 53-20 win over the Eagles. The production is a throwback to the kind the defense grew fat on when Charles Woodson was at top form in 2009 and 2010.

They're just doing it with more than one player.

"When you see individuals going in and out of packages, part of it is what we feel is best for the opponent, but part of it is the production of that particular individual," Packers coach Mike McCarthy said. "I'm very pleased with the way we have the different combinations of playing these guys. Our perimeter group is playing extremely well, particularly taking the ball away. So giving these guys these opportunities is important."

Although the Packers list Hyde as a starting safety, they like Hyde into the slot because he's one of the secondary's best run-defenders whereas Hayward's ball-hawking attributes correlate best to coverage.

It's a change from the past few years where the Packers have typically left the slot cornerback alone. Woodson predominately roamed there until he broke his collarbone and Hayward replaced him midway through 2012.

That's where Hayward remained until a recurring hamstring injury limited him to three games last year and dropped the responsibility into Hyde's lap. It was Hyde's job the rest of the season with some peppering of Tramon Williams.

The Packers have used all three in the slot this year, but turned to Hyde the past two weeks because of Chicago and Philadelphia's penchant for three-receiver packages. On Sunday, the defense also had LeSean McCoy and Darren Sproles to contend with in the backfield.

Hayward still received playing time, too. As Capers illustrates, the defensive backs' snaps against the Eagles tended to mimic wherever Matthews was playing.

"We knew both of those guys were very capable," Capers said. "So on first and second down in the personnel group where Clay is playing the inside, Micah gives us a little bit more physical presence out there, where we know Casey gives us really good coverage ability and ball skills and the ability to make big plays. So we like the idea that we can rotate those guys and put them in different situations."

NFL rankings haven't been kind to the Packers' run defense, which could be why it hasn't felt pressed to send out its 3-4 base defense more readily since the bye. Positioned 30th in most yards allowed per game (139.2) and 28th in yards per attempt (4.5), they've started to turn things around the past two weeks in allowing only 164 yards on 55 carries (3.0 yards per attempt) without a touchdown.

Maybe even more importantly, they've eliminated explosive plays. After Mark Ingram gashed the defense continually en route to 172 rushing yards, no rusher has gained more than 13 yards on a single carry the past two weeks.

Without any bona-fide run-stuffing linemen, the defense has taken an all-hands-on-deck mentality with able-bodied defensive backs like Hyde, and safeties Morgan Burnett and Ha Ha Clinton-Dix, and outside linebacker Nick Perry taking Matthews' starting spot outside.

The X-factor remains Matthews, whose presence in the defense isn't tied directly to one position. A fixture in the linebacker-heavy NASCAR dime package earlier this year, the Packers keep pulling out new tricks.

"I think we're just kind of moving around our ready list, frankly," McCarthy said. "It isn't like we're drawing up new things. These are concepts and schemes that we've been working on since Day 1. The idea of moving Clay around on our defense is something that we talked about back in April."

The Packers' newest version of their nickel package seems to be a compromise of a dime defense (six defensive backs) and what they were trying to accomplish with their 4-3 (or quad) scheme in the first month of the season.

It freed Matthews up to take down Eagles quarterback Mark Sanchez on third-and-2 at the start of the second quarter, sling-shooting around the outside with Hayward for an uncontested 10-yard sack.

What will the Packers draw up next? Capers says he has some more ideas and it starts with a nameless position for their four-time Pro Bowler in the heart of their defense.

-- Ryan Wood contributed to this report.​

The Green Bay Packers took the Philadelphia Eagles out of their element at Lambeau Field. Ryan, Wes and Pete break down Sunday's 53-20 romp. (Nov. 16, 2014)