With Tom Brady under constant pressure, it was just a matter of time before the Packers defense broke through. 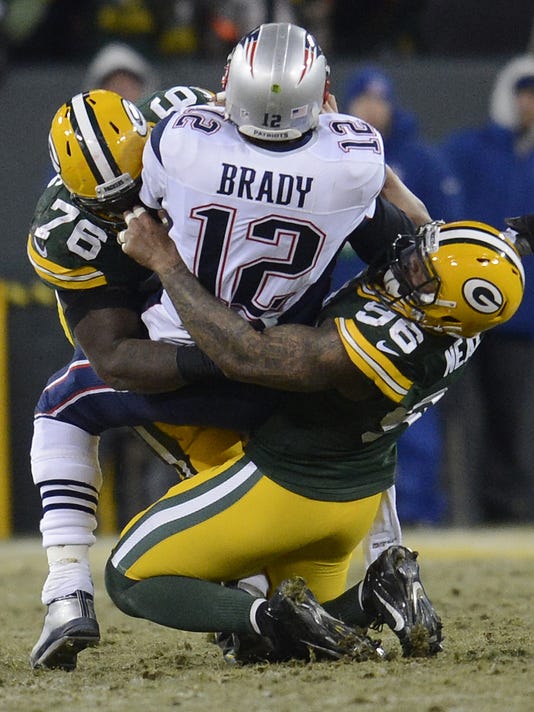 "I mean, Mike Daniels beat the hell out of his dude," Neal quipped.

None of them got to Brady.

Pass after pass, Brady's quick release beat the Packers' pressure. This is why cornerback Tramon Williams said playing the Patriots is the ultimate "mental challenge." Everything can be right, all the pieces in place, and it still might not matter.

Neal didn't fret. With Brady under constant pressure, he knew it was just a matter of time before the Packers broke through.

They couldn't have picked a better moment. With New England facing third-and-9 from Green Bay's 20-yard line — within striking distance of a potential game-winning touchdown — the Patriots' offensive line finally caved. Fittingly, it was Neal who helped bring Brady to the ground.

"I was beating the guy off the corner the whole time," Neal said of Patriots left tackle Nate Solder. "Brady finally held the ball. He was getting rid of it quick, but that particular play — I think Clay had a good coverage — and I was able to beat (Solder) off the edge." 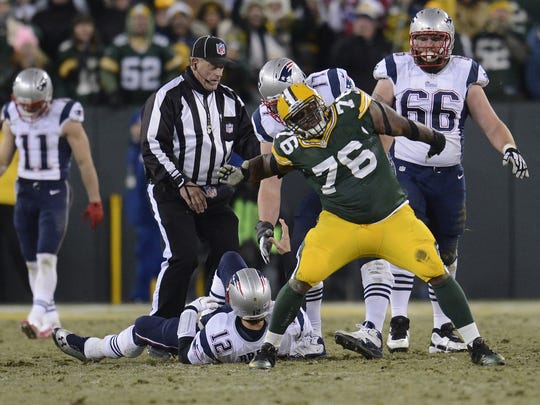 Daniels finished off the sack, and the Packers used their ensuing possession to run out the clock on a 26-21 win — including a difficult third-and-4 completion from Aaron Rodgers to Randall Cobb. But make no mistake, Sunday was a long-awaited signature performance for Green Bay's defense.

New England entered Lambeau Field with the NFL's best record. The Patriots crushed opponents during a seven-game winning streak, which was the NFL's longest. Six wins came by more than two touchdowns. Six times, they scored at least 34 points.

"You've seen — especially these last couple weeks — how potent their offense has been putting up points at will against some great, quality opponents," Matthews said.

The Patriots' offense was the best test the NFL had to offer. Before Sunday, they led the league in scoring (32.5 points per game) and average scoring margin (plus-11.8). They were sixth in yards, averaging 385.9 per game.

It was a daunting challenge for the Packers' defense to match, a test most experts expected them to fail. They didn't flinch. Green Bay forced New England into four punts, against three touchdowns. It handled short-field situations, and constant adversity.

By the end, a statement was made. Every bit as important as their now NFC-leading 9-3 record, the Packers' ability to quell the Patriots' red-hot offense is why they've become a trendy Super Bowl pick.

"As a defense, we've been playing very well these past four weeks," Matthews said. "We finally seem to be carrying our own weight in light of how well the offense has been playing. It's great to see we can string this together. We're not riding the roller coaster that we've done maybe in the first half of the season. So we're feeling good.

"There's still room for improvement, but it's just about putting it together. We feel like we can be just as good as anyone else out there. I feel like we've shown it."

For Green Bay's defense, overcoming the challenge an elite quarterback presents was an important hurdle to clear. Earlier this season, the Packers were unable to handle Seattle Seahawks quarterback Russell Wilson. A month ago, they faltered against New Orleans Saints quarterback Drew Brees.

In past seasons, Green Bay has bowed out in the playoffs against New York Giants quarterback Eli Manning (once) and San Francisco 49ers quarterback Colin Kaepernick (twice).

All four have played in the Super Bowl. There are four championship rings among them. Against Brady – the cream of the crop – Green Bay finally crossed the threshold.

Brady's 245 passing yards were the fewest he's had since the winning streak began. His 62.9 completion percentage was among his lowest of the season. Everything centered on the Packers constant pressure.

Neal said he could sense Brady was a little off. Arguably the league's most accurate passer, Brady uncharacteristically missed open receivers. Whether it was a bounce pass to tight end Rob Gronkowski, or sailing a throw over receiver Julian Edelman's head, Brady's usual sharpness was lacking.

"Most definitely," Neal said. "Whenever you make Brady have to slide around in the pocket and step up, I'm not saying he's bad at it. He's really good at it, but that's not what he likes to do. He likes to be able to get those throws out quick and timely, and whenever you can make him move around in the pocket and he can't get that timing down, it makes it a little bit difficult for any quarterback."

With four games left, the comparisons are about to get lofty. When Green Bay went on its Super Bowl run in 2010, the defense helped lead the way. The Packers led the league in scoring defense that season. They were fifth in yards.

They haven't reached that level since.

With an elite quarterback, Green Bay's defense has been the missing piece preventing the franchise from winning another championship. Statistically, the Packers haven't approached their 2010 dominance this season — they are 15th in scoring defense, 23rd in yards — but those rankings have been significantly better since returning from their bye one month ago.

At his locker, Williams was asked if the consistency Green Bay's defense showed in November is beginning to feel familiar. After beating one of the NFL's best quarterbacks, the Packers cornerback smiled wide.

"I was here in 2010, but I don't remember being 9-3 at this point in time," Williams said. "Every year is different. I don't actually have that same, exact feeling, but I have a really, really good feeling just of consistent, tough, playoff play that we need to have.

"You never know what can happen right now. It's still tight. We've still got games to play, we've still got quality opponents to play."