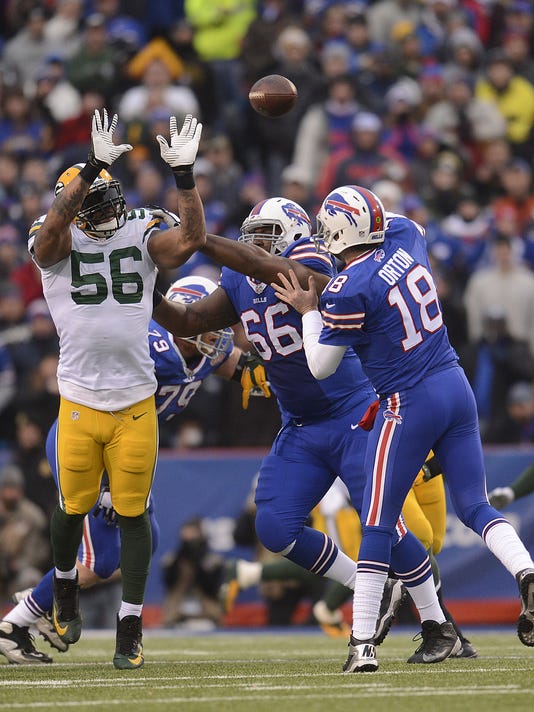 Across the locker room, David Bakhtiari sees one of the reasons he's become an ascending left tackle in his second NFL season.

Four times, he said, Peppers knocked him on his back with a counter move inside.

Young players learn from surviving matchups against great ones. What did Peppers teach Bakhtiari as a rookie?

"Don't lean. Always be ready for them to come back inside," Bakhtiari said. "Because of him, it's always in the back of my mind. I have yet to see a guy be able to do what he did to me last year. I definitely attribute that to working with him."

Peppers smiled when last season's game was mentioned Thursday. Of course he remembers. It's not often a veteran pass rusher with more than 100 career sacks gets to prey on a rookie left tackle.

A year ago, Peppers knew a countermove to the inside would be successful against Bakhtiari. Since arriving from Chicago, he hasn't seen the Packers left tackle repeat the mistake.

"I see that he's improved in that area," Peppers said. "He doesn't give that up anymore. So, I don't want to take credit for that, but if I helped him improve in that area then I can definitely see the difference."

Their relationship is one of mutual respect. Peppers, the one player who has called Bakhtiari an opponent and teammate, has watched the youngster develop into a promising left tackle. Bakhtiari has observed Peppers' transformation from team outsider to one of the Packers' leaders.

Peppers was voted one of six playoff captains this week. He's one of two defensive captains, along with fifth-year safety Morgan Burnett.

"It speaks volumes," Bakhtiari said of how quickly Peppers earned the respect of his teammates.

Packers coach Mike McCarthy said Peppers has a commanding presence in the locker room. It's in one-on-one interactions where the veteran's leadership really shines. Asked when he noticed Peppers inserting himself as a leader, McCarthy said he distinctly remembers the outside linebacker reaching out to Bakhtiari.

"David competed against him twice last year, and he was giving him insight on things he felt, how he viewed him as a left tackle," McCarthy said. "I know David was thankful for that and got a lot out of that conversation."

Bakhtiari helped Peppers, too. Just in a different way.

Peppers told Press-Gazette Media it was "a little awkward" when he first arrived in Green Bay.

His new teammates were longtime rivals. Peppers spent four seasons trying to beat the Packers when he was with the Bears. He left friendships in Chicago. With Green Bay, he had to build new relationships.

Peppers is an elder statesman now, a guiding voice. At first, he had to find his way. Peppers said Bakhtiari helped ease his transition.

Peppers and Bakhtiari couldn't be further apart inside Green Bay's football-shaped locker room. Their lockers are on opposite points, split lengthwise down the middle. It didn't prevent them from connecting.

Peppers said he spoke to Bakhtiari about work ethic, what it took to be a professional. It's the same message he gives all young players. His goal, he said, is to pass those values on to the generation behind him.

In Bakhtiari, he already recognized those principles.

"I could tell that was one of the guys that has his head on right, and he knew how to work," Peppers said.

Even now, Peppers doesn't say much. He can give inspiring speeches — teammates still rave about his pregame pep talk before the Packers hosted the Bears in November — but Peppers often prefers to lead by example.

Bakhtiari said Peppers' quiet, reserved demeanor made those early conversations special. He's impressed how quickly Peppers commanded respect from his teammates, both in the locker room and on the field.

"It's not just how he carried himself, but he is just a physical specimen above all," Bakhtiari said. "I think any room he walks into outside of football later on in his life, he'll command and demand respect because — excuse my French — no one wants to (expletive) with him. I can't see him walking into a room and no one giving him immediate respect to begin with."

Bakhtiari doesn't miss lining up across from Peppers in games. Now, he's glad their battles happen in practice, behind closed doors.

"The ability to work with him and not have to block him in games, but only in practice, is definitely a big advantage," Bakhtiari said.

There is "a period of development" in the early years of a player's career, Peppers said. Improvements should be made each week. He sees it with Bakhtiari. A jump has been made from his first to second season.

Among offensive tackles playing at least 75 percent of their team's snaps, Bakhtiari ranks fifth with 16 hurries allowed and tied for eighth with 26 total pressures allowed, according to ProFootballFocus. With two games left, his six sacks allowed are four less than his rookie year.

"When I played against him when he was a rookie, he was a solid player," Peppers said. "He played above his years in the league. He played like a veteran already. Coming here and being his teammate, watching practices, you can see why he's such a good player.

"He practices well, he speaks with his play — he doesn't really say a lot — and he works hard. All of that stuff, it makes sense because of his work ethic, the type of player he is."

McCarthy said Bakhtiari is having an "excellent" season. It's too early in Bakhtiari's career to project his ceiling, but, minimally, he appears to be the Packers' left tackle for the future. Bakhtiari has started every game in his career, 31 straight. Not bad for a fourth-round pick counting just a shade more than $455,000 against the salary cap.

McCarthy has said multiple times this season that the Packers have the best offensive line of his tenure. One significant reason is the consistent, solid play at left tackle.

Campen isn't surprised Bakhtiari never repeated the mistake he made against Peppers last season. Whenever an error is made, he said, Bakhtiari usually knows what went wrong by the time he returns to the sideline. The ability to correct on the fly is an important part of being a professional, Campen said.

For left tackles, success is gauged the same way. It's an unforgiving position. Mishaps are impossible to hide. When a left tackle is noticed on the field, it's almost always for negative reasons.

The good thing for Bakhtiari? Peppers said he doesn't notice his teammate at all when he watches film.

"And that's a good thing," Peppers said, pointing for emphasis. "I haven't noticed him at all during the games. He has very good balance, good footwork, and he's a fighter. More than anything, he fights. When you're playing that position, you've got to be competitive. He's one of the good competitors, so that's what makes him good."