The Packers have won four consecutive NFC North championships but only one game in the postseason during that time.

Green Bay Packers running back Eddie Lacy reacts after dropping a pass in the second half of a wild-card playoff game against the San Francisco 49ers on Jan. 5, 2014, at Lambeau Field.(Photo: Wm.Glasheen/P-C Media)

Andrew Quarless is one of the lucky few who needed only one season to capture the greatest prize the NFL can offer.

The rookie tight end walked into a Green Bay Packers' locker room primed for an historic playoff push in 2010. He witnessed the team's miraculous rise from the NFC sixth seed to Super Bowl champions.

If only the formula was that easy to replicate.

"Looking back at it, it's something that I don't want to say I take for granted, but just coming in fresh it's kind of hard to really grasp what's really happening, especially at the time," said Quarless, who's completing his fifth NFL season.

"That's why I'm on all the young guys right now just really trying to let them know this is serious and we really have a chance at this."

The reality is 12 teams enter the playoffs each year. Only one ends up happy. The Packers have won four consecutive NFC North championships since their 31-25 victory over Pittsburgh in Super Bowl XLV, but only one game in the postseason.

They parlayed the most explosive offensive campaign in franchise history to 15 regular-season wins in 2011. However, it did the Packers little good when the New York Giants ended their season in the divisional round of the playoffs with a 37-20 upset.

In 2012, Green Bay turned back the Joe Webb-led Minnesota Vikings 24-10 in the wild-card round only to give up 579 yards to Colin Kaepernick and the San Francisco 49ers the following week in a 45-31 loss.

The Packers had another crack at the 49ers last year at Lambeau Field, but a mesh of missed opportunities led to a narrow but nevertheless demoralizing 23-20 defeat. When asked about the three early exits on Monday, it's that loss coach Mike McCarthy points to as the most difficult to swallow. 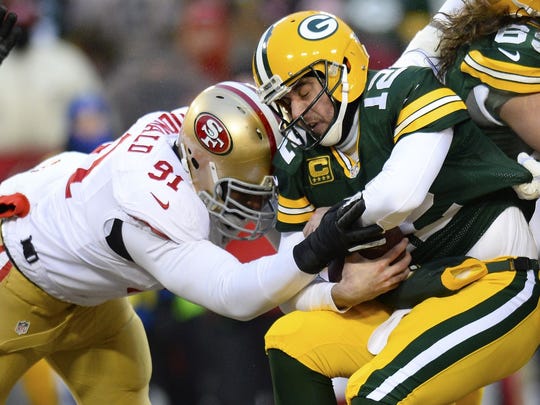 The organization made sweeping changes this offseason to the defensive philosophy and instituted a number of new measures to help curtail the rash of injuries that have affected them in recent years.

All of those efforts culminate this Sunday when Green Bay hosts the Dallas Cowboys at Lambeau Field with a trip to the NFC championship on the line. It's the first time in NFL history a team with an 8-0 home record will be squaring off against a squad that's 8-0 on the road.

Twenty players on the active roster remain from the 2010 Super Bowl team. The rest, including 13-year veteran Julius Peppers, are trying to nab their own piece of history. Those who have been here for the recent departures from the playoffs are also seeking their own bit of redemption.

"(I'm) tired of losing in January," said cornerback Davon House, who was drafted in 2011. "Three years in a row we lost during this time and (I) don't want to lose any more in January. This means a lot."

Rodgers said on his ESPN Wisconsin radio show this week the team's production in the playoffs "hasn't been good enough." The Packers have only been outscored 115-95 in those four games but averaged roughly a 100 fewer yards per game to the opposition.

What advantage do Packers really have in cold?

Quarless admits the one-and-done performances can put "a chip on your shoulder." Left guard Josh Sitton believes it's what's made this year's team "extremely hungry" to reverse its fortunes.

At the same time, the Packers pride themselves on being able to press the reset button. The past is the past. Right now, McCarthy wants his team to stay true to itself.

"It's a different team, every year is different," Rodgers said Wednesday. "This group seems to be a little hungrier. We're a few years now removed from the Super Bowl and there's a lot of guys who weren't a part of that run who are big contributors for us. It's fun to see those guys and their hunger to get there.

"We have the same drive, I think as a veteran who's been there, it might be even greater than the young guys who don't realize how special these times can be. We're one of four remaining teams in the NFC and we have a great opportunity in front of us."

So do the early exits create more pressure? Receiver Jordy Nelson doesn't think so. There have been lessons in the losses, though. These moments are fleeting. Regular-season successes have no bearing on postseason performance.

"I don't think there's more pressure. I think you do cherish them," Nelson said. "I realized that the year after we lost to the Giants after the Super Bowl. The Super Bowl run was awesome and then how quick it was over.

The newest fad in the NFL is to judge coaches and teams not only in terms of overall consistency, but also playoff performance. The Cincinnati Bengals have vastly improved under Marvin Lewis following a tumultuous ride through the 1990s.

Following the Bengals' 26-10 loss to Indianapolis Sunday, the only topic national media wanted to discuss is Cincinnati's sixth consecutive playoff loss under Lewis and quarterback Andy Dalton's inability to win in the postseason.

There's a lot on the line for the Cowboys, too. It's Dallas' first playoff appearance since 2009. Sunday's 24-20 comeback win over Detroit was only the Cowboys' second postseason victory since 1996.

The Packers understand what's at stake in their sixth consecutive appearance under McCarthy. There's a fine line between success and failure. This Sunday the Packers hope to take another step towards defining their legacy.

"These games are big," defensive back Micah Hyde said. "It's win or go home. We understand that. We've kind of had that mentality the last couple weeks. Coach has done a good job with that. Now the game is here and we just have to go out and perform."