Insider: Thumbs up to Quarless, down to Brad Jones

Insider: Thumbs up to Quarless, down to Brad Jones 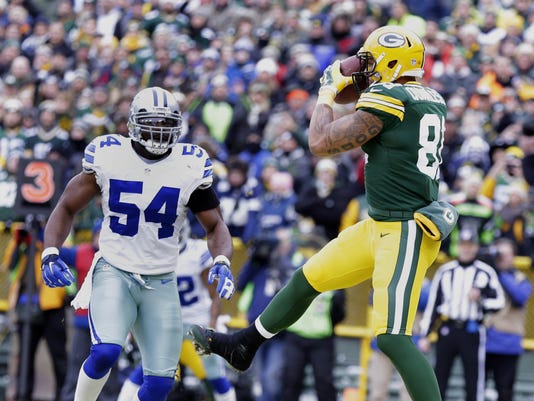 What we know: The Packers will be traveling to Seattle for the second time this season, this time with a Super Bowl berth at stake. What we don't know: How much Aaron Rodgers' calf injury will limit him against one of the NFL's best defenses. The key for Green Bay will be controlling the tempo by keeping its offense on the field. Three-and-outs could doom them next week.

Andrew Quarless had several problems Sunday — including a second-quarter missed block that forced Aaron Rodgers to throw incomplete and two false-start penalties — but on Green Bay's fourth-quarter go-ahead scoring drive, the fifth-year tight end came up big. On first down from the Packers' 20, Quarless caught a 13-yard pass from Rodgers. Later in the series, in Dallas territory, he made a key block to spring Randall Cobb for a 14-yard swing pass play. Then, on the next two plays, he caught consecutive passes of 6 and 8 yards to put Green Bay at the 13-yard line. The Packers went ahead 26-21 on the next play, a touchdown pass to Richard Rodgers. Quarless also had the Packers' first touchdown when he got open in the back of the end zone on their opening drive.

Brad Jones had another mistake-prone performance. The sixth-year linebacker, who plays exclusively on defense in the dime package and on special teams, was called for two penalties. The first helped keep alive the Cowboys' first scoring drive when he was called for holding DeMarco Murray on a third-and-4 play from the Dallas 44-yard line, giving the Cowboys a first down. Later on a kickoff return, a holding call on Jones forced the Packers to start the series at their 10-yard line. He wasn't effective as the dime linebacker either. It might be time for a change.

The go-ahead touchdown pass from Aaron Rodgers to Richard Rodgers was huge. It gave the Packers a 26-21 lead that they never relinquished. But the game seemed to turn in that direction on the previous series when Dallas was trying to respond to a Green Bay touchdown near the end of the third quarter. Up 21-20, the Cowboys were forced to give the ball back to the Packers after consecutive sacks — Nick Perry on the first and Perry and Mike Daniels on the second — set up a third-and-23 situation. Dallas couldn't convert and punted. Green Bay went ahead on its next series.

• Starting left guard Josh Sitton was back on the protection units for field goals and point-after kicks. It's the first time he's been back on those units since injuring his toe in Week 8 at New Orleans.

• With eight points, kicker Mason Crosby set a franchise record for most points scored in the regular season and postseason combined. He has 1,122, surpassing Ryan Longwell's 1,119. Crosby also extended his franchise record with his 10th and 11th consecutive postseason field goals.

• With 316 passing yards, Aaron Rodgers became the first quarterback in Packers history to have four 300-yard games in the postseason.

• Green Bay is 17-5 all-time at home during the postseason.

• The Packers reported no injuries. At one point, defensive tackle Josh Boyd left the field with an unspecified injury, but he returned later in the game. Boyd entered the game having been limited in practice with a knee injury. 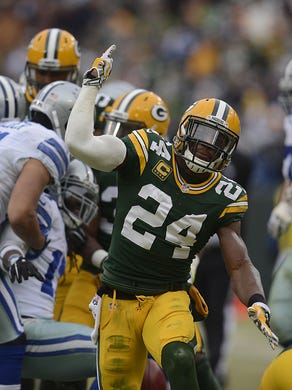 Green Bay Packers receiver Randall Cobb (18) is congratulated by his teammates after making a catch for a first down against the Dallas Cowboys. Evan Siegle/P-G Media/@PGevansiegle
Fullscreen

Green Bay Packers running back Eddie Lacy (27) breaks away for a run against the Dallas Cowboys. Evan Siegle/P-G Media/@PGevansiegle
Fullscreen

Green Bay Packers running back Eddie Lacy (27) breaks away for a run against the Dallas Cowboys. Evan Siegle/P-G Media/@PGevansiegle
Fullscreen 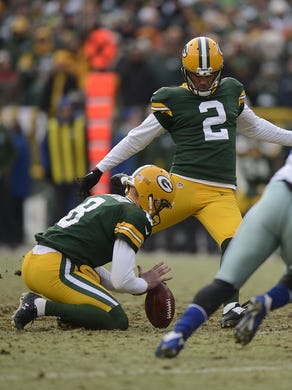 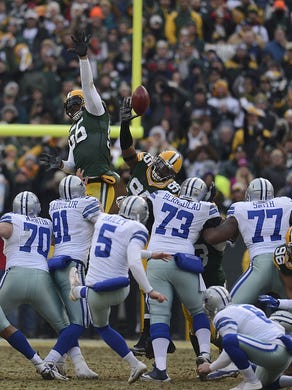 Green Bay Packers receiver Jordy Nelson (87) pulls in a catch past Dallas Cowboys cornerback Brandon Carr (39) in the second quarter. The catch was called back because of a Packers penalty. Evan Siegle/P-G Media/@PGevansiegle
Fullscreen 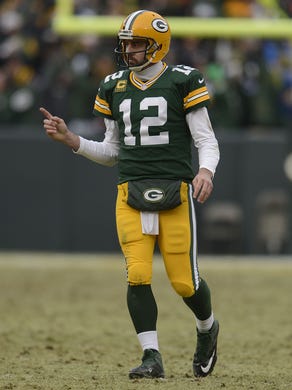 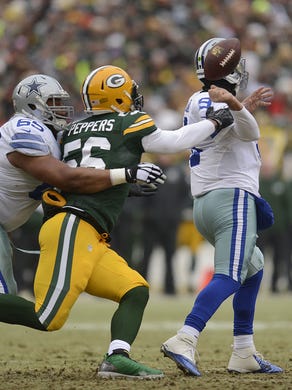 Dallas Cowboys quarterback Tony Romo (9) waits to hear the calling after a reception by wide receiver Dez Bryant (88) on the one yard line late in the fourth quarter was challenged. Green Bay took over on downs when the challenge was in their favor. Dan Powers/P-C Media
Fullscreen 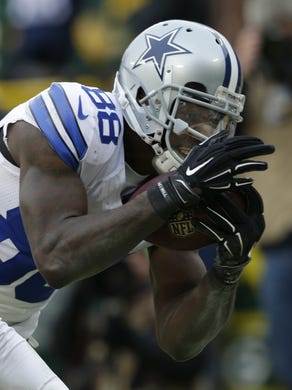 Green Bay Packers cornerback Sam Shields (37) defends on fourth down against Dallas Cowboys wide receiver Dez Bryant (88) as he tries to pull down a pass on the 1-yard line late in the fourth quarter. Dan Powers/P-C Media
Fullscreen

Green Bay Packers cornerback Sam Shields (37) defends on fourth down against Dallas Cowboys wide receiver Dez Bryant (88) as he pulls down a pass on the one yard line late in the fourth quarter. The Packers challenged that the ball was caught and won giving them possession of the ball. Dan Powers/P-C Media
Fullscreen 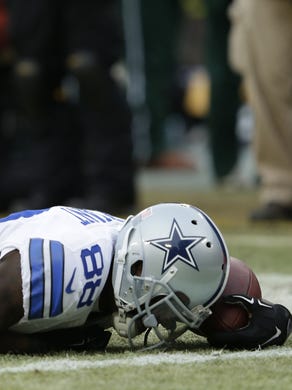 Dallas Cowboys wide receiver Dez Bryant (88) tries to pull down a pass on the one yard line late in the fourth quarter. The Packers challenged that the ball was caught and won giving them possession of the ball. Dan Powers/P-C Media
Fullscreen 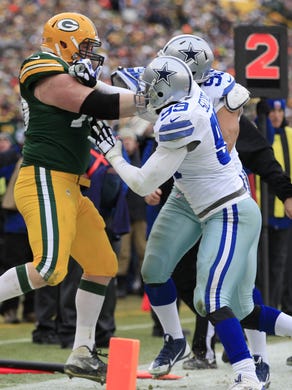 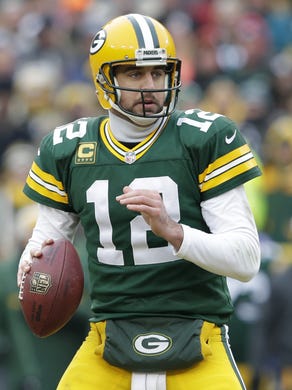 Green Bay Packers running back Eddie Lacy (27) looks for daylight behind the blocks of John Kuhn (30) and Josh Sitton (71) against the Dallas Cowboys. Wm.Glasheen/P-C Media
Fullscreen 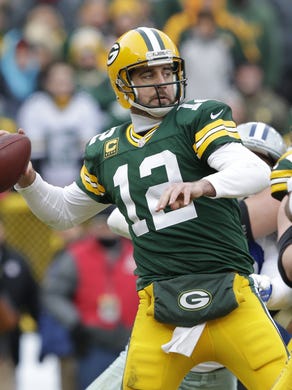 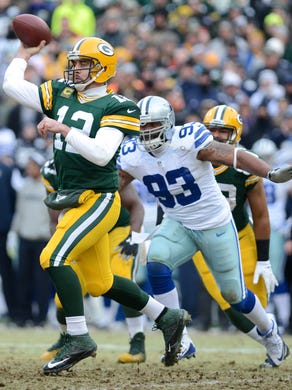 Green Bay Packers Datone Jones (95) celebrates his tip of a field goal attempt at the end of the first half against the Dallas Cowboys. Wm.Glasheen/P-C Media
Fullscreen 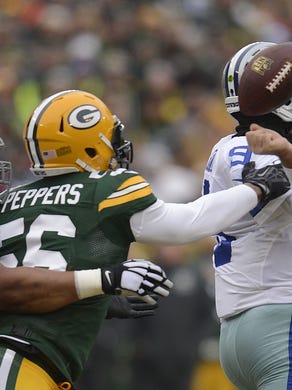 Green Bay Packers running back Eddie Lacy (27) runs through a hole in the defense against the Dallas Cowboys. Wm.Glasheen/P-C Media
Fullscreen

RAVE: Linebacker Julius Peppers again proved his worth as a high-priced free agent. He was signed to make plays in the biggest games, and he didn't disappoint. He forced two fumbles, had a sack, a tackle for loss and six total tackles. On Dallas' first series, Peppers blew past left guard Ronald Leary and got to Tony Romo, who fumbled, forcing the Cowboys to punt. On Dallas' first series of the third quarter, Peppers stripped DeMarco Murray of the ball, which Datone Jones recovered.

RAVE: The Packers had a five-point lead and the ball at their 33-yard line with 4 minutes, 6 seconds left on the clock. The Cowboys had two timeouts, so the question was: Could the Packers run out the clock? They did, with the key play coming on third-and-3 with 2:36 left. On that play, Aaron Rodgers squeezed in a short pass to Davante Adams, who escaped the tackle and rambled 26 yards to the Dallas 34. Two plays later, Rodgers hit Randall Cobb for 12 yards on third-and-11. That essentially ended the game.