Four weeks is not enough time for McCarthy to forget about the Green Bay Packers' loss in the NFC championship game.

Green Bay Packers coach Mike McCarthy looks to the video replay during the fourth quarter of the Packers 43-37 victory over the Atlanta Falcons at Lambeau Field.(Photo: Kyle Bursaw/PG Media/@kbursaw)

For Mike McCarthy, something always brings it to the surface. Usually, he said, it comes from details. A picture reminds him of a certain play. A player's name is synonymous with a particular game. Visit a specific stadium, and the frustration floods back.

Four weeks is not enough time for McCarthy to forget about the Green Bay Packers' loss in the NFC championship game. Four years won't be, either.

"I still think of the '07 championship game," he said, shrugging.

He's not alone. Seattle Seahawks general manager John Schneider knows what it's like to be on the wrong side of a crushing, unforgettable loss. The De Pere native entered the media room Thursday at the NFL scouting combine, and the memory of finishing 1 yard from a Super Bowl title still was fresh.

Schneider was about to be the architect of a repeat Super Bowl championship team, almost impossible in today's NFL. Then, in the blink of a Malcom Butler interception, the New England Patriots were walking away with his title.

"I'm not over it," Schneider said. "I think it's always going to stay with you. It's a part of life, you know. There's a lot of big games that I've been a part of that don't go your way. Can go all the way back to high school, if you want. No, I think it drives you."

Schneider, formerly in the Packers' front office, will have dinner with McCarthy this weekend. Friend to friend, McCarthy said he'll make sure his former colleague knows the pain isn't about to fade.

Neither will the motivation to get another chance. 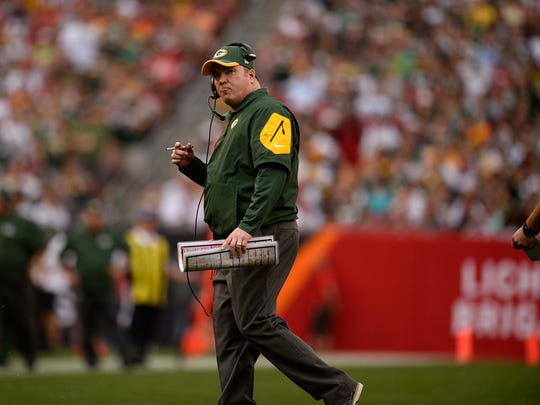 "He's not going to wake up one day and it's gone. It doesn't happen," McCarthy said. "I think we all wake up at night. I know I wake up at night still thinking about plays all the time. It never shuts off. A lot more during the season. I wake up at night writing down practice schedule adjustments and situational things."

Over time, disappointment turns into obsession. This past season, especially, took a toll on McCarthy.

McCarthy hopes it makes him a better, more efficient coach. He expects extra time spent with the defense and special teams will introduce more balance. This wasn't a knee-jerk decision made in the bitter disappointment of the Packers' loss to the Seahawks.

If anything, McCarthy said, poor communication during Green Bay's first trip to Seattle back in September showed why he needs to spend more time overseeing all aspects of game-day management.

"The things that went on in that game were very frustrating to me," McCarthy said. "I tell the coaching staff, 'Your job is to teach, demand and communicate.' They've got three responsibilities. Players are to prepare, perform and communicate. So when one of your three key responsibilities is not at the level it needs to be, then as the leader you better have an issue with that."

Around the league, coaches admitted they didn't expect to see McCarthy relinquish a core piece of his skill set. Perhaps more than anything, play calling is McCarthy's passion. And few coaches do it better.

At times, Green Bay's top-ranked offense looked unstoppable in 2014. Internally, McCarthy said the Packers use the same formula to measure success each year. It's based on 16 specific goals.

Last season, McCarthy said, the Packers met 13 of those goals. They were "one play or two plays" from meeting the other three.

"You know," McCarthy said, "if we could play at this level of offense from here on in, it will be the best offense pro football has seen."

Until the end, McCarthy said last season felt like one of his best as a coach. He saw it ending in Arizona with a Super Bowl title, not with a long, quiet plane ride home from Seattle.

Their success in 2014 doesn't make them any closer to a Super Bowl trip in 2015, McCarthy said. That's why a missed opportunity is so damaging, so permanent. Each season, a team resets when training camp opens. Last year no longer matters. Everything's new.

McCarthy feels good about what next season could bring. In his office, he has a board filled with players on the roster. That board shows the Packers have plenty of potential, McCarthy said. He knows that doesn't mean much.

If the disappointment of this past season showed anything, it's that nothing's guaranteed.

"This was a hell of a football team we had this year," McCarthy said, "and it grew. We had some bumps there early. I thought every time we were hit with a challenge, they accepted it and they worked at it and we got better. And I thought we were the best team in football when our season ended. You have to prove it on the field, obviously.