5 burning questions as OTAs draw near

5 burning questions as OTAs draw near

Defense is the focus for Wes Hodkiewicz and Ryan Wood in analyzing the 2015 Packers for this week's organized team activities. (May 26, 2015) 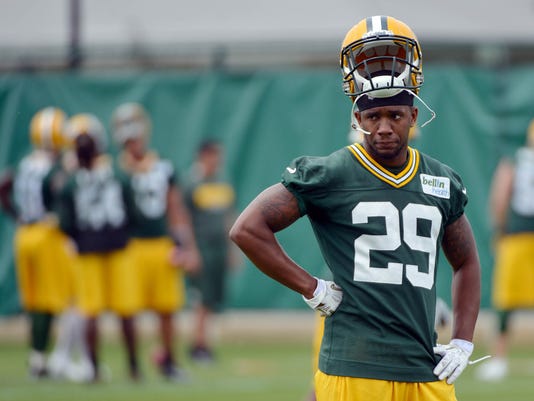 Offense is good. Led by two-time MVP Aaron Rodgers, the Packers return all 11 preferred starters from a unit that led the NFL in scoring last season. That's the recipe for another successful season, though for the first time the man pulling the strings will not be coach Mike McCarthy.

Defense is different. It was hit hard in free agency and replenished through the NFL draft. That's the recipe for a lot of moving parts, something that presents plenty of mystery.

Thus, it should be no surprise that four of the Packers' five biggest offseason questions come on the defensive side. Here's a look at what might soon be learned as the Packers open organized team activities with their first offseason practice Wednesday.

1. How much different will a veteran Packers offense look with a new play-caller?

As long as the Packers have their MVP quarterback, it's safe to assume their offense will continue to score points at a high rate.

Rodgers certainly has the ability to make any play-caller look good. But for a veteran team returning every starter, there's a surprising amount of unknowns.

For the first time since he was hired as quarterbacks coach in 2006, Tom Clements will call plays. McCarthy handed his former offensive coordinator — Clements' new title is associate head coach/offense — arguably his most precious responsibility back in January. The transition has already started in meeting rooms, but today will be the start of a new chain of command on the practice field.

The question is how much the organizational shift will change the offense.

Coaches don't usually tinker with a good thing, so the Packers will stick with the same fast-paced, no-huddle system they've implemented over the past couple of years. In some fashion, McCarthy's presence will continue to be felt. Rodgers still will command a lot of responsibility at the line of scrimmage, maybe more than ever.

There could be smaller, more subtle changes. It's something to keep an eye on in the coming weeks and months.

2. Can Casey Hayward make the jump to perimeter cornerback?

How the Packers will use linebacker Clay Matthews is the more polarizing debate, but this topic is more important.

After losing Tramon Williams and Davon House — the Packers' second- and third-best perimeter cornerbacks last season — in free agency, the defense must fill a significant void at a premier position. Sam Shields still is in place atop the depth chart, but the defense needs a starter on the opposite side.

The Packers used their first two draft picks on defensive backs, but both Damarious Randall and Quinten Rollins project more in the slot. Hayward will get the first crack on the perimeter. Entering OTAs, it's probably his job to lose.

Hayward, a fourth-year corner, was one of the Packers' top defensive playmakers last season. His three interceptions tied for a team lead, and he added two forced fumbles and a fumble recovery. He was the only Packers player to return an interception and fumble for a touchdown.

The former second-round pick excelled in pass coverage. His plus-8.7 cover grade easily was highest among Packers defenders last season, according to Pro Football Focus. Williams was second with a plus-2.7 grade.

Pro Bowler Clay Matthews will have to play at least partially at inside linebacker this fall. (Photo: Steve Mitchell-USA TODAY Sports)

3. What percentage of snaps will Clay Matthews play at inside linebacker?

During the draft, the Packers' message was clear. After waiting until the fourth round to nab an inside linebacker, Pro Bowler Clay Matthews will have to play at least partially at inside linebacker this fall.

Matthews was a difference-maker when he moved to inside linebacker for the first time with the Packers midway through last season. Even still, the Packers would seem to have plenty of incentive to move him back to outside linebacker. Matthews is their top pass rusher, and a pass rusher is most effective lining up on the edge.

Whether one of those three develop that quickly may be unlikely. Until they do, Matthews may be stuck playing off the line of scrimmage.

4. Will Julius Peppers still make an impact at 35?

Another crucial factor to keeping Matthews at inside linebacker — almost as important as the development of youngsters behind him — will be the play of Peppers.

The Packers wouldn't have had the luxury of keeping Matthews at inside linebacker for the final 10 games (counting playoffs) last season if not for Peppers' presence in the pass rush.

He was 30 years old then, still in his prime. He'll be 35 next season. That's quite old in the NFL, a young-man's league. At some point, the wear and tear of age catches up. If the 14th-year veteran continues to produce next season, it'll go a long way to keeping Matthews at inside linebacker.

5. How much will B.J. Raji and Letroy Guion share the field?

After playing so well at nose tackle last season, it's easy to forget Guion wasn't brought to Green Bay to exclusively play on the interior.

It turned out that way following Raji's season-ending right biceps injury last August. With Raji out, Guion flourished in the middle of the Packers' 3-4 defense. The former Minnesota Vikings defensive lineman had a career-high 31/2 sacks starting all 16 games at defensive tackle.

Guion lined up exclusively at nose or three-technique tackle last season, but the Packers signed him last offseason to provide depth throughout the defensive line. He's capable of playing five-technique, a defensive end in a 3-4 defense. The same could be said for Raji, though he struggled after moving to defensive end in 2012.