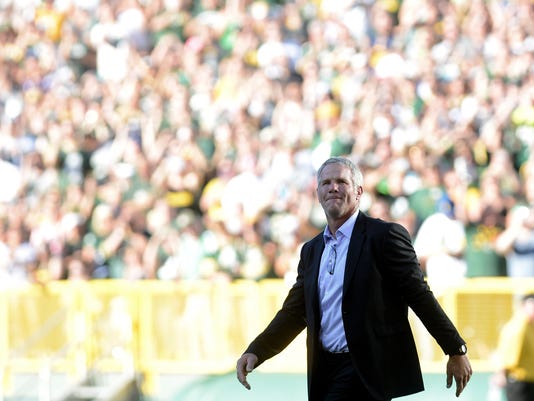 Brett Favre had been back in Green Bay for a few hours before the moment started to sink in.

The reality of what was to come dawned upon the three-time MVP quarterback as he walked into Lambeau Field for the first time in five years. The same foundation that witnessed the resurrection of the Green Bay Packers' franchise and birth of his Hall of Fame career.

Saturday's events were rooted in honoring Favre for his football accomplishments, giving him his rightful place in the Packers Hall of Fame and retiring his No. 4 jersey, but something else occurred in the hours after he stepped off his plane from Los Angeles.

After seven years in exile, Favre was home.

What Favre had to say to Packers fans

"I didn't have that 'Oh, I'm back where it started' type until I walked into the tunnel," Favre said. "(When) I walked in coming in from the field, up the tunnel, took a left, went into the double doors, it was like I never left. It was a great feeling.

"It's kind of funny how things are triggered. And then it was kind of a sigh of relief almost. Staying at the Radisson, lord knows how many times we've done that. I almost felt like ordering me a cheeseburger and fries as I did before every game. It started kind of settling back in as being normal again."

The messy separation between Favre and the Packers in the summer of 2008 created a divide among the fan base. It only grew larger when Favre returned from a second retirement in 2009 as a member of the rival Minnesota Vikings, defeating the Packers twice that season.

Brett Favre waves to the fans as he makes his way to the tunnel after the ceremony honoring him at Lambeau Field. Kyle Bursaw/Press-Gazette Media/
Fullscreen

Brett Favre speaks with Lance Allan who emceed the event with Favre in the bowl. Favre's number was retired and he was inducted into the Green Bay Packers Hall of Fame. Kyle Bursaw/Press-Gazette Media/
Fullscreen

Fans cheer as they wait for Brett Favre to come out and speak in the bowl of Lambeau Field to a sold out crowd as he is inducted into the Green Bay Packers Hall of Fame. Kyle Bursaw/Press-Gazette Media/
Fullscreen Favre's family looks on as he addresses the crowd as he is honored at Lambeau Field. Kyle Bursaw/Press-Gazette Media/
Fullscreen 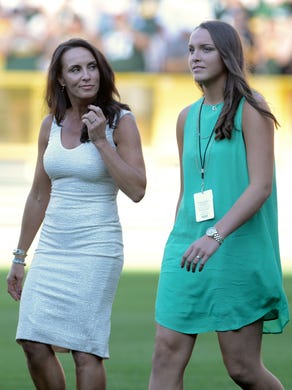 Deanna Favre makes her way out to the field before Brett speaks to a sold out crowd at Lambeau Field. Kyle Bursaw/Press-Gazette Media/
Fullscreen

Bart Starr junior looks on as Favre speaks, including an acknowledgment from the former quarterback that he hopes Bart Starr senior will be able to attend the ceremony for Favre on Thanksgiving. Kyle Bursaw/Press-Gazette Media/
Fullscreen

Favre admitted on Saturday afternoon that he was "shaking in his boots" the first time he returned as an adversary. However, the moment gave him an interesting perspective. While boos poured upon him out of the tunnel, the experience reaffirmed the passion of Packers fans.

On Saturday, Favre returned to much different atmosphere — almost like a game day — with Favre jerseys peppered throughout the parking lot and packed into Lambeau Field. The fans' devotion was evident when more than 67,000 tickets to his induction ceremony sold out in the span of hours.

His youngest daughter, Breleigh, turned to him after hearing the news and said: "They must really like you." Favre was dumbfounded.

"It really says a lot about the whole situation," Favre said. "If there were ever any doubts prior to the tickets going on sale, they're not anymore. And what a way to show that you're welcomed back into the family. Just what an honor. And I'll be honest with you, I mean no disrespect by this, I am more honored by that than by the Hall of Fame induction in itself. I think that is such a tribute to the fans, and that's why Green Bay is Green Bay. Simple as that."

In the 30 minutes he spoke with the media Saturday, Favre reflected on the unlikely nature of his career, the pieces that brought the franchise back to prominence in the 1990s and lifelong friendships he's developed along the way.

Many of the central components of his career sat behind him in the Lambeau Field auditorium — former general manager Ron Wolf, coach Mike Holmgren, team president Bob Harlan and center Frank Winters, who presented him during Saturday night's ceremony.

Wolf and Harlan called Favre the best player to ever play for the Green Bay Packers, citing the organization's mediocrity prior to his arrival. Holmgren recounted Wolf coming into his office in 1992, telling his new coach that he was thinking about trading a first-round pick for the quarterback.

Favre made it a point to deflect a lot of his attention to those who were around him, though there were two who couldn't be on hand Saturday night — his late father, Irv, and Hall of Fame defensive end Reggie White, who passed away in 2004.

Favre called the 13-time Pro Bowler "the great player he ever played with," and credited the advice White gave him after his playing career ended in 2000: "Soak it in." It took Favre a few years, but the weight of the words eventually settled in once his own career was over.

"I haven't missed football. I've missed Mike chewing my butt, rooming with Frank, bus rides," Favre said. "We used to have a good time cutting up with all the coaches. We never picked on Mike, but we were able to pick on some of the others. And that's what I miss. I don't miss third-and-15 in the Metrodome and we haven't won a game there in eight years. I don't miss that. I miss the camaraderie with the guys. I miss the things that Reggie told me I would miss and he's right. It's less about the game and more about the people."

Whatever happened in 2008 hasn't dulled what Favre accomplished in his first 16 years in Green Bay. That much is clear. He looks back on his time in Green Bay fondly. Favre wishes he won more games and championships, but believes his play spoke for itself.

Favre admits he wasn't the most polished quarterback or interview. He lived and died on every play, but hopes fans will remember him for how real he was and his genuine nature.

"I'd like to think that when they look at my career or watch me play that they thought, 'That's the way I would do it. If I could play, I would do it that way.'"

Favre on return: 'It was like I never left'

When Favre came to Green Bay in 1992, he heard all the tales about the Lambeau and Lombardi years. The fan base was stalled in those moments from yesteryear because it had been nearly 25 years since the franchise was anything more than OK.

If Favre accomplished anything in his career, he feels it was being a piece of the Packers' resurgence back to the forefront in the NFL. For his efforts, Favre is the sixth player in the nearly 100-year history of the Packers to have his number retired.

"Yes I've been away from Green Bay for quite a while," Favre said. "Quite frankly, a lot of people have forgotten maybe the body of work that has taken place over the years simply because of what's happen in the departure when I left. Of course, that's all forgotten. Today has been such a special day."