The seventh-year nose tackle’s presence will be vital if Guion’s suspension stands. 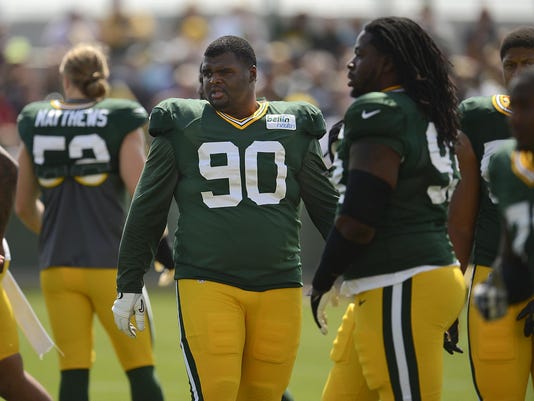 The return of B.J. Raji could be crucial for a defensive line that could be missing several players at the start of the season.(Photo: File/Press-Gazette Media)

Last year was supposed to be when everything came full circle for B.J. Raji.

After a forgettable 2013 season, the Green Bay Packers’ defense lineman was back on a one-year, incentive-laden contract and excited about the prospects of moving back to nose tackle in the 3-4 base defense.

Then, Raji ruptured his right biceps in the third preseason game against Oakland. He spent the rest of the season on injured reserve, but remained in Green Bay during his rehab. This spring, he dedicated himself to weight training and used yoga to revitalize his body.

Working on another prove-it deal, the 6-foot-2, 337-pound nose tackle says he’s back to full strength. His return will be vital for a run defense that will need to deal with Chicago’s Matt Forte, Seattle’s Marshawn Lynch and Kansas City’s Jamaal Charles to start the season.

Not to mention the Packers will be missing Datone Jones for the opener and reportedly could be without Letroy Guion for the first three games after a February arrest in Starke, Fla.

“I felt last year he was having a good camp,” said defensive coordinator Dom Capers of Raji. “I think when a guy goes through that, they’ve got that added incentive because they appreciate being able to be out there and compete.”

Raji, who turned 29 two weeks ago, is three seasons removed from his last sack and coming off a career-low 17 tackles in 2013. Still, his handshake agreement with the organization to move him back to nose tackle has energized him.

The Packers greatly missed Raji early on last season. Mixed with shoddy play at inside linebacker, Green Bay ranked near the bottom of the NFL against the run most of the season and was yielding a league-worst 153.5 rushing yards per game at the bye week.

Raji was a full participant during organized team activities and minicamp, lining up regularly with Guion and fourth-year veteran Mike Daniels in what could make for a formidable run defense once the three linemen are together on the field.

“I think he’s come back in excellent shape,” said defensive line coach Mike Trgovac of Raji. “Just like I thought last year, I thought he had good energy on the practice field and he’s showing it again. He’s showing great leadership out there. He’s just really working to get better is what he’s doing.”

The run defense recovered in the second half of the season following Clay Matthews’ switch to inside linebacker, but also benefited from the improved play of Guion, who missed most of training camp with a hamstring injury.

Once he knocked the rust off, Guion settled in at nose tackle and responded with a career year (32 tackles, 3½ sacks). His agent had started talks with the Packers on a possible long-term extension before a February arrest in Starke, Fla., for felony possession of marijuana and a firearm.

After reaching a plea agreement, the Packers brought Guion back on a one-year, $2.75 million contract without a signing bonus. If his suspension stands, the Packers will save nearly $500,000 in base salary and per-game roster bonuses.

Since returning to the team, his teammates and coaches report Guion has been a model citizen.

“I think the guy has grown generally fond of the Packers and appreciates what Ted (Thompson) and Mike (McCarthy) did giving him another chance, “said Trgovac of Guion. “I’ve never had a problem with Letroy. … Letroy is mature enough to handle what happened to him. You’ll have to ask some other guys about that, but as far as football-wise, there’s never been an issue on that.”

Jones, a 2013 first-round pick, was suspended for the regular-season opener against Chicago following a citation for possession of marijuana hours after returning from last January’s NFC title game against Seattle.

It’s a tough blow for Jones, whose career has been hampered by ankle injuries. He started the year in the 3-4 base defense before injuring his ankle against Minnesota on Oct. 2 and missing the next three games.

The Packers stuck with 2013 classmate Josh Boyd in the base the rest of the season and used Jones primarily as a rotational pass rusher in the dime subpackage. He finished the year with 21 tackles and 1½ sacks, playing only 28.6 percent of the defensive snaps.

The Packers have received their biggest push in the pass rush from the undersized Daniels, a fourth-round pick in 2012 who has accounted for nearly half of the defensive line’s sacks with 12 over the last two seasons.

Daniels led the line in all major categories last season, including snaps (684), tackles (41) and sacks (5½). His 24 pressures and 11 quarterback were among the highest on the defense, according to Pro Football Focus.

Daniels, 26, received nearly a $1 million raise this offseason after qualifying for playing-time incentives for former late-round draft picks as part of the most recent collective bargaining agreement. He could cash in even more next offseason with another strong campaign.

Indubitably, the Packers will want to lock up the 6-foot, 305-pound rusher, who has become a respected voice in a young locker room in addition to his on-field production.

“One of the biggest things with Mike is his offseason preparation and his preparation for every game,” Trgovac said. “Just the way he comes to practice and the habits he’s been able to form had been tremendous. It’s for every young player coming into the league to study. That’s the way you should do it and that’s the way you should approach it. He takes it very seriously. It means a lot to him. I don’t anticipate ever him having a drop-off.”

The Packers are hoping they might have unearthed another Daniels prototype in sixth-round pick Christian Ringo, who had a record-setting run at Louisiana-Lafayette. At 6-1, 298, Ringo is nearly identical to Daniels in terms of size.

Once the pads go on, the Packers will be looking to see if he can match Daniels’ brute strength. He’ll be competing for snaps with Boyd, 2014 third-round pick Khyri Thornton, Mike Pennel, Bruce Gaston and undrafted rookie Lavon Hooks, who turned some heads during the offseason program.

Boyd has proved to be a capable rotational player since being taken in the fifth round in 2013. At 6-3, 310, he’s not built like a prototypical base end, but is able to penetrate and disrupt. He played through a knee injury last season, but missed all of the offseason program.

Thornton’s performance in training camp last year left something to be desired. He failed to make much of an impact in three preseason games before tearing his hamstring against Kansas City in the finale and landing on season-ending injured reserve.

The coaches say he benefited from the year off, especially in terms of conditioning, but it’s up to Thornton to show he has what it takes to contribute on the field.

“Time to take a step,” Trgovac said. “Obviously he had a setback last year and hopefully when … training camp is over, he’s able to take that step forward. We’ll see if he’s done that or not.”

Pennel was one of two undrafted rookies to make the Packers’ roster last season and received most of his playing time early in the season. At 6-4, 332, Pennel is a massive presence and picked up the nickname “Baby Haynesworth” from Raji, a nod to former All-Pro nose tackle Albert Haynesworth.

Packers coach Mike McCarthy said earlier in the offseason program he believes this could be the best defensive line the team has had in his 10 years as coach. While they may not have everyone to be available to start the season, the Packers hope their depth translates to a better start than 2014.

“I think we’ve got a lot of good competition, which is good for us,” Trgovac said. “There’s going to be some real competition in training camp this year. It’ll be interesting.”