Neal hopes to make most of 2nd chance

Neal hopes to make most of 2nd chance 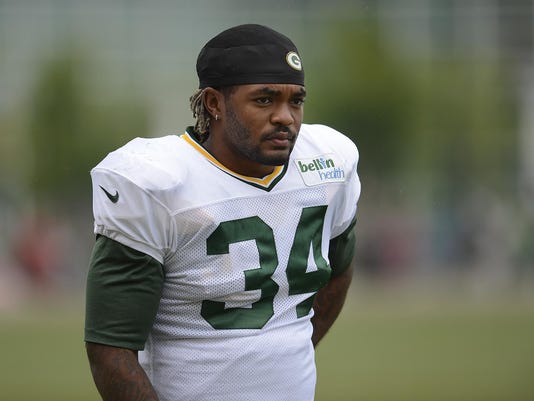 Rajion Neal had momentum as the first week of training camp bled into the second. He was running hard, carrying a chip on his shoulder. A roster spot was in sight.

The rookie running back was one of the Green Bay Packers' early surprises last August. Neal, feeling overlooked after going undrafted, had just rushed for 1,124 yards and 12 touchdowns as a senior at Tennessee.

Early in camp, he proved those numbers were no fluke.

Back in Tennessee for the Packers' preseason opener, Neal took a detour. A helmet hit his knee while returning a kickoff. Writhing in pain, he feared the worst.

"I actually thought I tore my ACL because my foot was still in the ground when he hit me," Neal said. "And it hurt."

Neal merely had a bone bruise and an MCL tear. It was a significant injury, requiring roughly six weeks of rehabilitation, but far from the year-long recovery of an ACL tear.

Neal thought his momentum would lead to a job as the third running back. Before his injury, he started the preseason opener with a 12-yard touchdown against the Titans, showcasing his speed and power on the play.

Instead of finishing camp, Neal spent the rest of his summer rehabbing with Dr. James Andrews, the renowned knee specialist. The third tailback job he thought was his went DuJuan Harris, who no longer is with the Packers.

"I understand it was a business," Neal said. "It would've been a giant, giant gamble for me to get picked up on the 53, let alone cut another (running) back, and all that being based on just a couple practices and one game. So it was a big gamble. I understood the business side. I had to just take it in stride."

RosterBuilder: Should Rajion Neal make the cut? You decide

Even after missing his shot, Neal knew the Packers represented his best opportunity to make a roster. He signed on the practice squad in early November, then returned this offseason for a second chance to make the roster.

On an offense that returns all 11 preferred starters, third running back is one of the only true position battles in training camp. There's no guarantee the Packers will keep a third back, not after drafting fullback Aaron Ripkowski in the fifth round. Starter Eddie Lacy, backup James Starks and All-Pro fullback John Kuhn could join Ripkowski to give the Packers four running backs, the ideal number for a 53-man roster.

Neal is trying to persuade general manager Ted Thompson to keep five. He's had another strong start to camp, showing he has the potential to be a complete running back. Neal, who caught 66 passes for 626 yards and five touchdowns at Tennessee, has especially impressed as a receiver out of the backfield.

"I'm pretty confident," Neal said. "This is my second go-around with the plays. I feel like I'm doing a lot of good things as far as just playing with instincts and just the familiarity with the playbook, the quarterbacks, the checks, the calls. I feel I'm in a good spot. I just need to continue to grow off of it, just be consistent."

Neal has company in the third running back competition.

Entering training camp, John Crockett was expected to be his primary challenger. The undrafted rookie from North Dakota State has an impressive highlight reel — he finished 6 yards short of 2,000 last year — to go with three straight FCS national titles.

But Crockett sprained his ankle during the first day of minicamp in June, and was unable to practice until Friday. Those missed reps are irreplaceable for a rookie free agent fighting to make the roster.

"The most important thing right now for any player — particularly a young player — is to be out there every day," McCarthy said. "They need to be out there, take the reps, getting more comfortable, where they're just seeing it and playing football."

There's still time to catch up, but fellow rookie free agent Alonzo Harris emerged as a contender in Crockett's absence.

Harris rushed for 3,330 yards and 44 touchdowns in four seasons at Louisiana-Lafayette. While Neal could bring dual-threat ability to the Packers' offense, Harris prides himself as a pass protector. He's a bulldozer at 6-foot-1 and 237 pounds, breaking tackles as he runs downhill.

"Yeah, he's big," Lacy said. "He's a tough runner. He's a load. Once he gets his shoulders north and south, and gets his pad level down, that's tough for any defender that's in his way. It's cool to have somebody else back there like that."

The battle for third back could linger deep into training camp. It's a close competition, but Neal's experience with the Packers gives him an advantage.

He knows his path to a roster spot won't be easy, but it is possible. Before his final season at Tennessee, he said, fellow Volunteers running back Arian Foster met with Neal and his teammates. Foster, the Houston Texans' star back, was an undrafted rookie six years ago.

"It was really interesting," Neal said, "to hear the way that he went about things and how it's turned out now. It's definitely not seen every day. The fact that somebody so close to the same family and school, community, could be able to do it, it definitely gives you hope.

"You've just got to make the most of the moment."

As training camp's first full week once again bleeds into the second, Neal's sole goal is capitalizing on his second chance. Asked what it will take to make the 53-man roster, Neal simply said "be productive." Then he repeated himself.

He thinks about that a lot. He also remembers the injury, the pain of falling just short a year ago. Running hard, carrying that chip on his shoulder, Neal said he wants to seize the roster spot that's in sight.

"It would be one hell of a privilege, man," Neal said. "Just to be able to say I continue to play football, let alone with a great organization. Then, from there, I just want to work to actually help the team win, be a part of games, schemes, and playing. Going out there, getting dirty and roughed up with the guys. That would be a big moment."