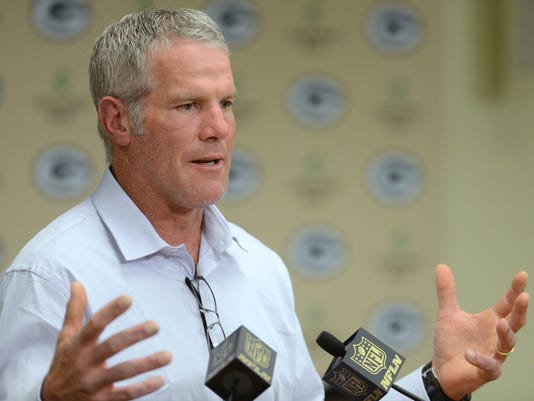 Brett Favre is one of five former members of the Green Bay Packers organization who are among the 108 modern-era nominees for the Pro Football Hall of Fame’s 2016 class.

Players aren’t eligible for the Hall until they’ve been retired for five years, and this is Favre’s first year. He appears to be a sure bet to make as a first-ballot Hall of Famer. Among his many accomplishments he’s a three-time NFL most-valuable player and has the most passing yards and second-most touchdown passes in league history.

After 7 years in exile, Brett Favre returns home to Packers

Holmgren coached the Packers from 1992-98 and won a Super Bowl in the 1996 season. He also went to a Super Bowl as coach of the Seattle Seahawks.

Sharpe played receiver for the Packers from 1988-94.

Sharper, who also is eligible for the first time, was a safety for the Packers from 1997-2004, and also played for the Minnesota Vikings and New Orleans Saints. This year Sharper began a nine-year prison term for pleading guilty to multiple rapes.

The Hall of Fame’s selection committee will reduce the list of nominees to 25 in November and 15 in January. The committee then meets on Feb. 6 in San Francisco to reduce that list to five finalists, who then receive an up or down vote. A nominee needs 80 percent yes votes from the 46 selectors for election to the Hall.

Three other finalists already have been determined. Two are seniors candidates, quarterback Ken Stabler and offensive lineman Dick Stanfel. The other is a contributor candidate, former San Francisco 49ers owner Edward DeBartolo, Jr. All three will be subject to a yes or no vote at the selectors meeting in San Francisco.

A minimum of four new members must be elected to the Hall every year.