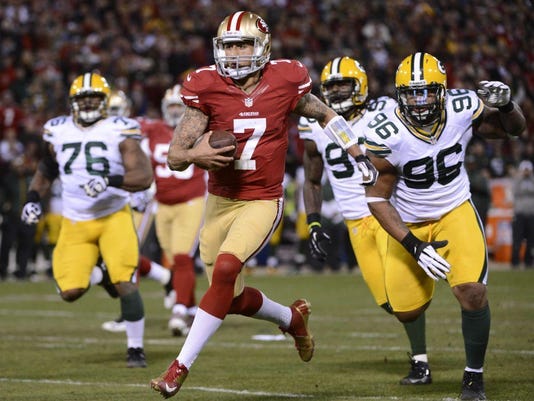 Peppers was a defensive end with the Chicago Bears on Nov. 19, 2012. It was a Thursday night game, nationally televised in prime time. Alex Smith, the 49ers' starting quarterback, was out with a concussion. No one knew what to expect from the second-year backup quarterback.

There’s a reason Peppers can’t recall much from his team’s 32-7 loss.

“It didn’t go so well for us,” Peppers said, “but that was a lot time ago. A lot of those guys aren’t even there anymore. So look for different results this time.”

Kaepernick burst onto the NFL scene three years ago. He was lightning in a bottle, a big-play threat with his arm and legs. In his first start, he threw for 243 yards and two touchdowns with a 133.1 passer rating against the Bears.

Smith never got his job back. Kaepernick’s “two-dimensional” ability sparked the 49ers to an NFC championship in 2012, making hiim one of the league’s most exciting, young quarterbacks. At the onset, he was an irresistible force.

It has only been three years since Kaepernick stormed the league, but his peak indeed feels like a long time ago. His passer rating has dipped in each of the past four seasons, sitting at a career-low 71.1 entering Sunday’s matchup against the Green Bay Packers. His interceptions have steadily increased. Opponents have described Kaepernick as predictable, a troubling label for any quarterback.

The Packers will face Kaepernick one week after his worst game as a professional. In a 47-7 drubbing by the Arizona Cardinals last Sunday, Kaepernick had his lowest passer rating (16.7) as a starting quarterback. He threw four interceptions with no touchdowns for the only time in his career.

Tomsula also would be justified having all the confidence in the world with Kaepernick playing against the Packers’ defense.

Since his first playoff game – a 45-31 win in the 2012 divisional round – Kaepernick’s dual-threat ability has given Packers defensive coordinator Dom Capers fits. The Packers have lost four straight games against the 49ers, with Kaepernick starting the last three. He has averaged 300 passing yards and100 rushing yards with eight total touchdowns and two interceptions in those games.

Kaepernick didn’t make much of his success against the Packers. “Things have just opened up for us,” he said Wednesday. Still, it gives the Packers reason to not take the opposing quarterback lightly this week, regardless of his recent struggles.

“He’s a dynamic player,” Packers coach Mike McCarthy said. “Obviously, we’ve had some issues with him in the past, and they’ve gone back to their read-option, and so scheme-wise he definitely stresses you. He can make all the throws. He’s a big, athletic guy. So he’s a different type of quarterback to prepare for.”

With Clay Matthews playing most of his snaps at inside linebacker, the Packers are better equipped to defend Kaepernick than in previous matchups. Matthews always has been the Packers’ best “spy” linebacker, containing a quarterback inside the pocket. But he didn’t move inside until midway through last season.

Matthews was an edge rusher when Kaepernick torched the Packers in the past. He “spied” Kaepernick sporadically, he said, but it could be a full-time job Sunday. Matthews said this week will be an adjustment, “a little more film study” than past games. He’s expecting the same, explosive Kaepernick this week.

“It’s just something that we have to be mindful of,” Matthews said, “especially as a pass rush. Defensively, we’ll have our plays to keep an eye on him and try to eliminate what he’s capable of doing, but for the most part – as I say with playmakers in this league – they’re going to make their plays. We just have to limit them as much as possible.”

After a rough opener in Chicago, the Packers’ defense has limited opposing “playmakers” the past two weeks. It held Seattle Seahawks running back Marshawn Lynch and Kansas City Chiefs running back Jamaal Charles to 90 yards on 26 carries combined. For both tailbacks, that production roughly equates to an average game.

In Chicago, the Packers struggled because too many defenders got out of their gap and were “doing their own thing,” Matthews said. Their alignment has been sound against Lynch and Charles, and it needs to remain the same this week. Defensive tackle B.J. Raji said nothing allows big plays against the read-option more than blown assignment.

“You don’t want to improvise or get fancy against an offense like this,” Raji said. “History has shown us it can get ugly if you try to do your own thing.”

History also has shown Kaepernick’s struggles might not matter. His rare ability to make plays outside the pocket – a touchdown threat every play – is a riddle the Packers have yet to figure out.

Raji expects his defense to have more success this week.

“We have different personnel,” Raji said. “Since we played these guys last, we acquired Julius. We’ve got some guys who can run around. We’ve got some athletic deers out there that can run. So me, personally, I’m not as worried as in the past. Because Kaepernick obviously is going to make some plays, but if he were to break contain we have some guys that, I believe, can run and maybe get him down.”