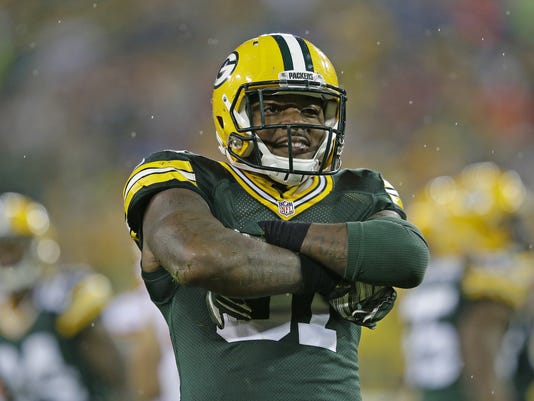 A year ago at this time, Jayrone Elliott was fulfilling all the duties required of the new outside linebacker on the block.

With the Green Bay Packers enjoying their healthiest season on record under coach Mike McCarthy, the undrafted rookie’s responsibilities rarely deviated from his work on special teams and occasionally delivering food for veterans Clay Matthews and Julius Peppers before flights to road games.

Elliott hasn't run many errands this season, but the path to the field remains cluttered. For all the injuries the Packers weathered in September, they’re as deep as ever at outside linebacker with Matthews, Julius Peppers, Mike Neal and Nick Perry all relatively healthy and accounted for.

Still, Elliott’s work is slowly increasing and the 6-foot-3, 255-pound outside linebacker has impressed with what he’s accomplished on a limited basis. Two weeks ago against Seattle, he needed only nine snaps to nab an interception and force a fumble on back-to-back series to seal a 27-17 victory.

Elliott had two more tackles and his first NFL sack on 15 snaps in Monday’s 38-28 win over Kansas City. It’s a small sample size, but the Packers soon may have no choice other than to get him on field if the plays keep piling up.

“That’s just something he’s able to do. He’s a playmaker,” defensive back Micah Hyde said. “He’s been like that since the day he got here. I think we all appreciate his willingness to compete every day. Whenever they call his name, he steps up and makes big plays.”

Elliott slipped through the cracks mostly because he didn’t start until his senior year at Toledo. He had nice numbers — 70 tackles, nine sacks and five forced fumbles — but it wasn’t enough to get drafted. So he took the undrafted path to Green Bay for a $5,000 bonus, shifting from defensive end to linebacker.

Elliott was unconscious in his first preseason with an NFL-best five sacks. The performance made him the fifth consecutive undrafted rookie to make the Packers’ initial 53-man roster at the position. While making the roster is great, however, it doesn’t always guarantee a 10-year NFL career.

Each year, there’s always a camp darling in Green Bay. It wasn’t too long ago many fans were starting to sculpt Vic So’oto and Dezman Moses’ Hall of Fame busts after they impressed  as undrafted rookies. Both flashed, faded and failed to survived cuts the following year.

Already established on special teams, Elliott amassed another 17 tackles and 1 ½ sacks this summer to prove he wasn’t a one-hit wonder. His recent heroics have only fueled his hype train.

“He made a big step,” defensive coordinator Dom Capers said. “When you perform, you warrant more reps. Everybody gets more comfortable and confident when you’re in there and you’re able to make plays. He made two tremendous plays in the Seattle game at critical times in the game. He’s done a nice job when he’s been in there.”

Matthews’ shift inside has led to an early spike for Neal (67.5 percent), Perry (46.8) and Elliott (20.7) in their snap counts to start this season. Plus, the Packers also have made a concerted effort to pace the 35-year-old Peppers (70.0), who played more than 800 defensive snaps and has yet to miss a practice in Green Bay.

Capers appreciates the depth. For many years, the Packers were trotting out one undrafted free agent after another out at the position in Frank Zombo (2010), So’oto and Jamari Lattimore (2011), Moses (2012) and Andy Mulumba (2013).

Things came to a head in the 2013 wild-card playoffs at Lambeau Field when the defense barely had  any healthy outside linebackers remaining by the time San Francisco quarterback Colin Kaepernick put the final nail in the Packers’ season.

With Matthews already out with a broken thumb, the defense lost Neal five plays into the game. The last two options were Perry, playing on a bad foot, and undrafted rookie Mulumba, who played most of his 57 snaps with a sprained medial collateral ligament that sidelined him for the first month of his offseason.

The situation deteriorated so badly that defensive end Datone Jones needed to take a handful of snaps at outside linebacker, limiting what Capers could call. The Packers still contained Kaepernick until his feet put the 49ers in range of a Phil Dawson 33-yard field goal in the 23-20 win.

“The thing that stands out in my mind about that is we had to battle all year to get in,” Capers said. “That was one of those deals where you were dealing with adversity five plays into the game in terms of having players play different spots. You hate to lose probably our top rusher at that time was Mike.”

“I can remember running out of guys.”

Two months after the loss, general manager Ted Thompson signed Peppers to a three-year deal and the direction of the defense immediately changed. After leaning on undrafted rookies to eat 1,398 defensive snaps from 2010-2013, Elliott was needed for only 54 as a rookie.

The Packers will encounter Kaepernick again this Sunday. While injuries have hit the Packers at other positions, they’ll have all of their full array of outside linebackers to rotate wherever they please against the 49ers and their dual-threat quarterback.

“It can only do one thing — it’s helping every guy,” said Mulumba of the depth. “Get the older guys rest and then the younger guys get to get our reps in there … and be more involved. The rotation has been good. The guys who have been in there have been doing great. This year for San Francisco, we have to keep everybody fresh at the end, so we can execute our plan.”

Unlike Mulumba, Elliott wasn’t thrown into the fire as rookie. He used it to learn from the four veterans ahead of him on the depth chart. He took something away from each player whether it was Matthews’ instincts, Peppers’ encyclopedia of pass-rushing moves, or Neal and Perry’s power.

Elliott is still his own pass-rusher. At his core, he relies on speed and finesse to beat his blocker. His strong start seems to suggest it’s working for him.

Elliott isn’t getting ahead of himself. Right now, he knows his place is on special teams where he leads the unit with 68 snaps and five coverage tackles, according to the coaches’ statistics. Both Capers and special-teams coach Ron Zook believe there’s a correlation between special-team contributions and a player’s long-term positional potential.

The Packers’ run of undrafted rookie outside linebackers making the final roster ended this year when Elliott and Mulumba beat out James Vaughters and Jermauria Rasco, who landed on injured reserve.

So while Elliott remains the youngest linebacker on the active roster, his chores are over. Almost.

“I’ll probably bring doughnuts in on Friday mornings, but they don’t really ask me to do anything,” Elliott said.