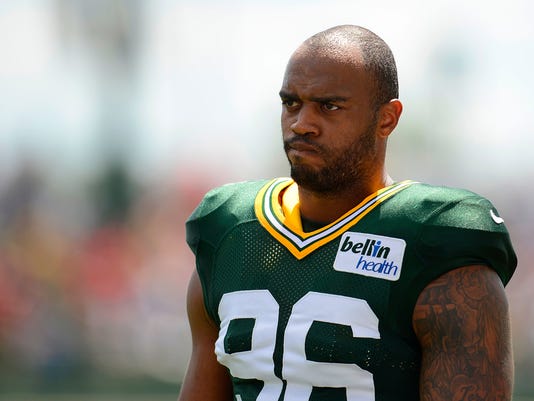 Clay Matthews’ move to inside linebacker is credited for revitalizing the Packers’ defense, but it wouldn’t have been possible without suitable replacements on the outside.

And a healthy Mike Neal is helping provide the Packers with the kind of depth there that brings a smile to the face of defensive coordinator Dom Capers.

“I like our rotation that we have at that position,” Capers said of his outside linebacker corps. “You’ve seen with Julius (Peppers), we kind of have a play count that we like to give to Julius, and Mike’s the same way. So we’ve got Nick Perry, and Jayrone Elliott has come along to where we feel comfortable putting him in there, you saw the big plays he made (creating two turnovers vs. Seattle). So I like our rotation of our outside guys; we’ve got more depth there than we do in most spots on the defensive side of the ball.”

Neal, a second-round pick in the 2010 draft as a defensive end from Purdue, is in his third year as an outside linebacker after making the position switch before the 2013 season. He was in on a sack of Chiefs quarterback Alex Smith on Monday night and has eight tackles (four unassisted) this season.

“Mike has done a good job in the first three games,” Capers said. “He’s got more time playing the position and he’s a lot more comfortable.”

Neal played only sporadically in his first few NFL seasons, mainly because of injuries. He missed the first three games of his rookie season because of an abdominal injury, made his debut in Week 4 and then suffered a season-ending shoulder injury the following week. In 2011, Neal missed the first nine games after having knee surgery for a noncontact injury suffered in training camp. He was suspended for the first four games of the 2012 season for a violation of the NFL’s performance-enhancing-drug policy (which Neal attributed to his use of Adderall for attention deficit disorder). All told, he missed 28 games in his first three seasons.

Neal began making the transition from 305-pound defensive lineman to outside linebacker for the 2013 season and dropped 50 pounds for his new role in Capers’ 3-4 defense. He played in every game in 2013 and set career highs in virtually every statistical category. Despite dealing with abdominal injuries at the start of the last two training camps, Neal didn’t miss a game in 2014 and has been on the field for all three this season.

“He’s explosive,” Capers said of Neal, a 28-year-old native of Gary, Indiana. “If you look at him now, he looks like a linebacker. He’s 255, right around there. He still has good strength, he’s got quick twitch, he can be sudden. He’s got good rush ability. We’ll still use him outside, we’ll put him inside some. If we go to the NASCAR package (typically three outside linebackers joining Datone Jones on the defensive line), he becomes an inside rusher. So he gives us good versatility and flexibility.”

Neal spoke with Press-Gazette Media about the Packers’ defense and the role he’s playing this season:

How would you assess the performance of the defense so far?

We’re doing great. The biggest thing we’re preaching to each other is to be able to finish (after allowing the Chiefs 14 fourth-quarter points). We’ve been able to get off to a good start, the pieces are falling into place, as they have in past years. We’re up to speed, we just have to keep it going.

Seven sacks against the Chiefs, how did that happen?

Mike McCarthy said a good run defense helps the pass rush because it takes away one aspect of an opponent’s game and enables you to tee off. After a rough start in Chicago, is the run defense coming around?

Most definitely. You have to make the game one-dimensional. Most teams go out and want to run their offense the way they scripted it and once you disrupt their pattern and get them one-dimensional, you make the game easy for yourself. Stopping the run on first down is a goal we always have, and we’ve accomplished it the last two weeks.

What’s the biggest strength of your game?

Hard to say. I’m still learning the position. This is my third year at outside linebacker so I’m feeling myself out still.

What was the hardest part of making the transition to outside linebacker?

Being healthy is a big part of it, right?

I’ve been able to stay healthy and be on the field, that’s the biggest thing. You’ve got to be able to play and get experience and be able to practice, and that experience is definitely paying off.

Your first few years, you battled a lot of injuries …

I had a bunch of stuff going on. Shoulder, knee, abdominal … suspended. God has helped me through all of it. I’ve been blessed to be able to stay in the same position and be in the same organization and be able to come out on top. I’ve got to give credit to God for that.

What’s the key to avoiding injury?

It’s a combination of a lot of things. You’ve got to find yourself when you come into the NFL. It’s not like when you were a kid and you could just go out and do whatever. You’ve got to have a proper diet and make sure that you are eating the right things on certain days. And there’s a lot of injury-prevention stuff you can do, including tier workouts. Those are things I’ve been expanding in my years in the NFL and it’s been helping.

You retweeted something along the lines of “Elite athletes: Are they born or are they made?” Where do you stand on that?

Everybody’s different. Some people are blessed to be able to have the physical capabilities, but having the work ethic to back it up is another thing. Some people are just sheer hard workers … they don’t have that athletic ability but they’re going to make up for it by working hard. So it’s kind of both.

How do you relax off the field, what do you like to do away from the game?

Right now my daughter (Michelle, 18 months) is the biggest thing for me. I enjoy spending every single free second that I have with her. She’s a handful!