Defense finally gets better of Kaepernick

Defense finally gets better of Kaepernick 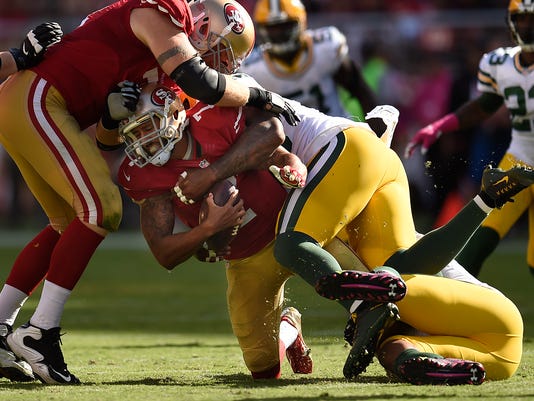 The rivalry that had been skewed so heavily in favor of the San Francisco 49ers and their athletic, young quarterback couldn't have been more lopsided this time around. A chorus of boos set the soundtrack of an abysmal showing against the Packers, who exorcised past demons with a 17-3 win in front of a restless crowd of 70,799 at Levi's Stadium.

It was obvious the luster was gone early. After racking up more than 1,200 yards in his first three victories over Green Bay, Kaepernick was held to 13-of-25 passing for 160 yards and an interception (55.4 passer rating). He scrambled for 57 yards, but looked uncomfortable in the pocket from the start.

Few of his passes ventured more than 10 yards and the ones that did often were well off the mark. Kaepernick frequently was met by a hoard of defenders each time he ran off the read-option or scrambled. It also didn't help that the 49ers abandoned the run. Carlos Hyde rushed only eight times for 20 yards.

Green Bay's defense isn't a finished product, but has improved considerably since the 49ers' last saw it in the 2013 playoffs. Undrafted free agent M.D. Jennings has been replaced by first-round pick Ha Ha Clinton-Dix at safety. Linebackers are more plentiful with Clay Matthews now roaming the middle of the field.

Most importantly, the once-invincible Kaepernick looked all too human. The Packers allowed only 196 total yards (119 passing, 77 rushing) to improve to 4-0 on the season and send the reeling 49ers to 1-3. By the end, chants of "Go Pack Go" started to infiltrate the 49ers' new stadium.

"I think we just continue to get better as a defense, really," said Matthews, who had one of the Packers' six sacks. "The personnel is better, too, in who we have out there. Guys are maturing and getting better. At the same time we understand what type of player he is. If the read's not open, he's going to tuck it and try and get that first down or those extra yards, so it really requires guys to be disciplined in their rush lane.

"But it's a lot easier when they're winning up front and being the ones to create that pressure as opposed to on the back end having to cover it up. So that made it real easy. I felt like we did a great job beating those guys up front and getting after him."

The Packers gave up more than 400 total yards to the 49ers the first time they saw Kaepernick in the 2012 playoffs and 2013 regular season. They seemed to have an answer in the 2013 playoffs, but mounting injuries left them shorthanded by the end of the 23-20 defeat.

Many defenders felt the key to Sunday's stout performance came in how quickly Green Bay's offense started. After San Francisco deferred the opening kickoff, quarterback Aaron Rodgers led the offense on a 12-play, 80-yard drive that ended in a 9-yard touchdown pass to tight end Richard Rodgers on a scramble play.

Things slowed down from there with the offense playing without receiver Davante Adams (ankle) and right tackle Bryan Bulaga. That might have been an issue in past years, but not Sunday. The defense forced the 49ers to punt on their first three possessions, managing only 12 plays.

With Kaepernick coming off a four-interception performance against Arizona last week, San Francisco's coaching staff tried to get him comfortable with a few read-option calls early on. But his 12-yard carry on the 49ers' first offensive play would be the best he'd muster the entire night.

Insider: Thumbs up to dominant defense

One reason Kaepernick wasn't able to exploit the defense of coordinator Dom Capers is the abundance of athleticism now present. On the few occasions he squirmed to the second level, Clinton-Dix and the linebacker unit quickly closed on him. Matthews was strictly an outside linebacker in the first two meetings with Kaepernick and absent in the third because of a twice-broken thumb.

Unlike their past encounters, the 49ers struggled to sustain drives with the five-time Pro Bowler clogged up the middle of the field, especially with tight end Vernon Davis out with a knee injury. Matthews finished with two tackles, a sack and another hit of Kaepernick.

"Colin, he’s a special athlete and you have to tackle him. That was really the focus," Packers coach Mike McCarthy said. "When you get into the option phase of their offense, they put you in a lot of one-on-one situations and you have to win those. Clay was a big part of the plan and he delivered. I thought Clay played another great game."

Green Bay gave up one explosive play early on Quinton Patton's 40-yard end-around that set up a Phil Dawson 33-yard field goal with 6 minutes, 23 seconds left in the first half. The defense still left the field on a high note after Nick Perry and Jayrone Elliott scored back-to-back sacks of Kaepernick to force the field goal.

The Packers missed a 44-yard field goal from Mason Crosby before halftime but scored on two occasions in the third quarter to seize control. Ultimately, their first touchdown was sufficient given the defense's performance, which started with shutting down Kaepernick and the 49ers' run game.

To make it happen, Capers stacked the box with Clinton-Dix, and dared Kaepernick and his receivers to beat their cornerbacks. They succeeded on a couple occasions, but not enough to do any real damage. Hyde was ineffective on his inconsistent reps.

"I think if you look at the way the game went, they didn't hand the ball off to (Carlos Hyde) as many times as they have in the past couple weeks with the other teams," outside linebacker Mike Neal said. "I think the thing was the offense jumped out on them early and they felt the need to respond and kind of went away from what they do best. Once you get a team rattled like that, the odds are in your favor."

The defense has achieved a few fast starts this season, but finishing games has been an issue. Not this week. After Green Bay forced San Francisco to punt on three straight possessions, cornerback Sam Shields came across the field to pick off Kaepernick on a deep pass intended for Anquan Boldin.

The 49ers threatened on their next series after Kaepernick hit Torrey Smith on a 47-yard completion over Damarious Randall, but the rookie cornerback batted down the next heave to Smith in the end zone. Then, Neal went unblocked in sacking Kaepernick on fourth-and-2 to end the series.

Coming off a seven-sack performance against Kansas City, the six the Packers tallied at Kaepernick's expense now puts them second in the NFL with 17 in four games this season.

"The defense, when they play like that, we're going to be tough to beat," said Rodgers, who completed 22-of-32 passes for 224 yards and a touchdown. "Offensively, we've kind of carried it at times the first few weeks, but the defense, especially the last two weeks, pressure on the passer. We're not getting a ton of turnovers but when the offense is not turning it over, it makes us pretty tough to beat."

As difficult as it had been for the Packers to solve Kaepernick, the formula to defeating him was rather elementary — cut off his running lanes — and this time they had the depth to do it. Green Bay forced him to the pocket and kept him off-balance with seven hits.

Like their 27-17 win over Seattle two weeks ago, it represents how much the Packers have come in trying to stake an early claim to being the prohibitive favorite in the NFC. It also was meaningful to finally get the best of the 49ers and Kaepernick.

"Oh, of course. That's just like the Seattle game," cornerback Casey Hayward said. "We know the past couple years it's been going through those guys, going through Seattle and San Fran. In order for us to change that, we have to beat those teams."

With Kaepernick spiraling downward, Green Bay's defense didn't give him any room for a comeback. The Packers' ability to contain the 49ers for all four quarters went a long way toward getting the win and leaving Santa Clara as the NFL's eighth-ranked defense.

"We haven't been able to close out a game," Neal said. "We start out good. We go through the third quarter decent and then we just usually kind of poo down the drain in the fourth quarter. So playing a complete game was big for us. We needed it and we need to do that more in the future."