Packers tackle “very happy” with how his left knee felt during practice. 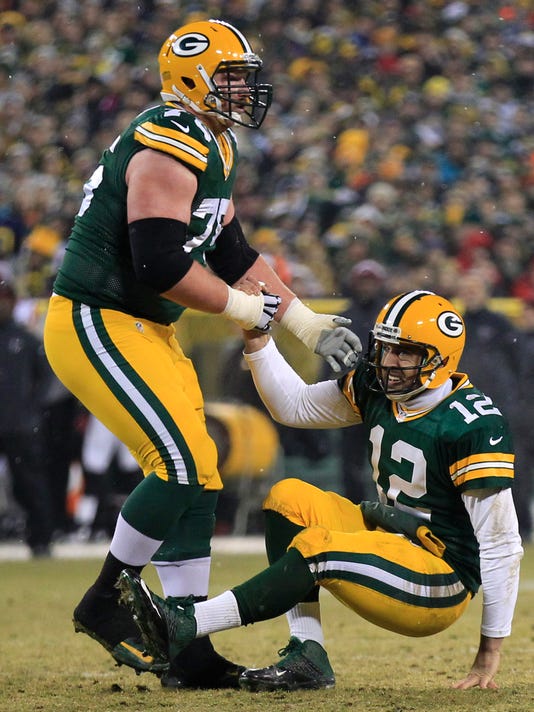 Bulaga hasn’t played the past three games after injuring the knee during a Sept. 17 practice. He returned to the practice field Wednesday and was able to participate in the Packers’ padded practice Thursday.

Bulaga said his knee held up well during the padded practice, and he was able to move around well on the field. The Packers will have a brief practice Saturday, their final time on the field before Sunday’s game against the St. Louis Rams.

“From yesterday’s practice to today,” Bulaga said, “I think everything went well. Nothing really happened today that gave me any alarm. But I’ve still got to work tomorrow and we’ll see how it goes from there.”

“So far, so good,” McCarthy said. Asked if he was optimistic about Bulaga’s chances to play Sunday, McCarthy replied, “Yes.”

After missing so much time, the question is whether Bulaga can be ready to play at his usual level on so few practices. Bulaga reportedly had knee surgery for repair a torn meniscus as well as a sprained MCL, though he would not confirm either.

McCarthy said he will be tracking Bulaga’s health closely the next two days, but barring any unforeseen setbacks, the Packers likely will have their right tackle back Sunday.

“Like anything with your veteran players, there's communication,” McCarthy said. “There's trust there, and Bryan knows what he needs to get ready. It's a big challenge with their defensive line, especially the matchup, with particularly (Rams defensive end Chris) Long. That's why you take the full week and make sure he's ready.”

Bulaga said he set a goal for his return to the field, though he did not expound on it. A natural return date could have been at the end of this month, when the Packers travel to the Denver Broncos after their bye week. At this point, Bulaga appears to be on track for a quicker return.

Bulaga said he didn’t feel ready to play a week ago, when the Packers were preparing for their West Coast trip at the San Francisco 49ers. He clearly feels better this week. Whenever the knee feels good enough to play, Bulaga said, he isn’t interested in delaying his return.

“Obviously, you don't want to miss any time,” Bulaga said, “but there's things that are unrealistic. Then there's things that are realistic. I mean, yeah, you set a goal so you can work hard in rehab to reach something. Whether it’s this week or next week or whenever it is, I’m just happy with the way that the rehab’s gone, and the way I’ve felt.”