Datone Jones said his duaghter's birth forced him to grow up. 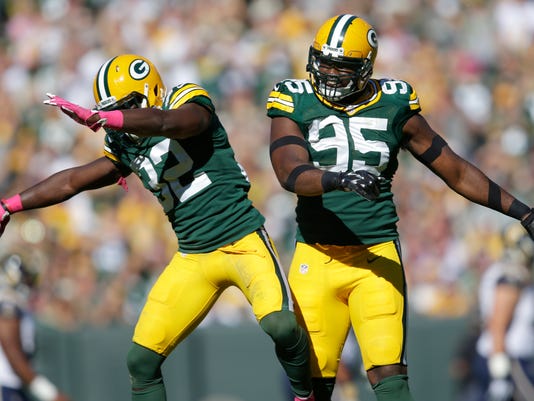 Two weeks after being cited for marijuana, Green Bay Packers defensive end Datone Jones learned he and his wife Lauren were having their first child.

Now that she’s arrived, the couple giving birth to Laila Jones at 12:08 p.m. Thursday in Green Bay, the new father said last winter’s news altered his life. He knew he couldn’t be a child anymore, Jones said. Not when he’s welcoming one into the world.

Jones, who was suspended for the Packers’ opener in Chicago, said his daughter’s impending arrival forced him to grow up.

“My life flashed before my eyes,” Jones said, “because I’m like, deep down I knew in six, seven months, everything’s going to hit the fan. And for me, I’m just like, ‘Oh, I’ve got a daughter on the way, this is about to hit the fan on ESPN. I know for a fact I’m going to be criticized so hard from the people that really don’t know who Datones Jones is. They don’t know Datone Jones is the football player, the great man he is off the field. Everybody is going to know me specifically off that situation.’”

Now, Jones will be known as something else entirely. He’s a first-time father, and he looked like one Friday as he beamed while speaking about his daughter. Jones called Laila his “pride and joy,” promised to always provide the “finer things” in life. Like any father, Jones said, he wants to ensure his daughter always has her needs met.

Of course, he also has high expectations for his child. Jones said he’s always been inspired by Muhammad Ali. He named his daughter Laila after Ali’s daughter.

“Spelled the same way,” Jones said, smiling. “You know daddy’s a fighter. If I didn’t play football, I’d probably be a professional fighter right now. Muhammad Ali is very inspirational for me. Laila Ali has a great track record herself, so I decided to name my daughter after her.”

Jones said his daughter’s due date was Sunday, which would have coincided with the Packers’ game against the San Diego Chargers. Naturally, he’s glad to avoid a schedule conflict. He’s preparing to play Sunday, just like every week.

Jones has a whole new set of goals now. He called his role with the Packers his second job. Being daddy will always be No. 1. Already, Jones said, he’s thinking about what kind of legacy he wants to leave for his daughter.

“I don’t want my daughter pulling my name up in 20 years and seeing the negatives,” Jones said. “I want her to pull me up in 18 years and see all of the great things that I’ve done, all of the things that I do in the community here and back home. I just want to show her that her dad is a superhero, and it’s not how you start, it’s all about how you finish, and I’ve overcome so much adversity. I’m a family man, and whatever my wife or she needs, I’m going to provide for her.”